Jackie Little Nominated For Sport BC Master Female Athlete Of 2014

Port Alberni’s Jackie Little has been nominated for the Sport BC Master Female Athlete of the Year Award.

Little will find out at the Sport BC Athletes of the Year Awards on March 12, 2015 whether she’ll be adding yet another award to her already impressive collection.

With a stellar amateur career already on her resume from her junior years in Alberta, Little has continued her winning ways since becoming a resident of British Columbia in 1982.

To that end 2014 was yet another banner year for her as the 5-time BC Women’s Amateur winner added her fourth BC Senior Women’s Championship (winning previously in 2008, ’11 and ’12) as well as taking home the BC Women’s Mid-Master, BC Zone 6, Titleist Order of Merit, PNGA Women’s Amateur (Senior Flight) and Alberta Sr. Ladies Championship titles.

The Alberta Sr. Ladies was the 2nd of back-to-back wins in that event as she also won in 2013.

In addition to the victories, Little placed 5th in the Canadian Women’s Senior Championship, an event she has won twice before - in 2008 and 2009. 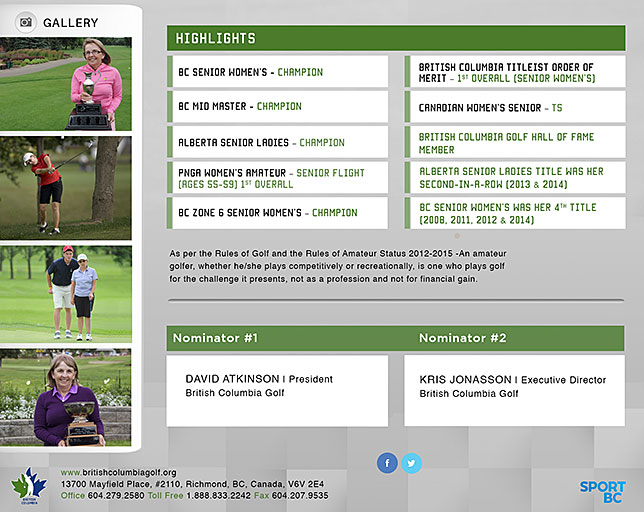 An inductee into the British Columbia Golf Hall Of Fame in 2009, Jackie Little has acted in the past as captains of World Teams for Canada and represented her province in competition at various levels seemingly too many times to count.

The 2014 winner of the Sport BC Master Athlete of the Year award was track athlete Christa Bortignon of West Vancouver.