Christina Proteau of Port Alberni has been nominated for the Sport BC Female Athlete of the Year Award.

Proteau, who was recently named the Pacific Northwest Golf Association Women’s Mid-Amateur award winner, will find out at the Sport BC Athlete of the Year Awards on March 12, 2015 whether she’s adding another honour to her name.

Proteau has had a stellar 2014, which included receiving her third consecutive PNGA Women’s Mid-Amateur Player of the Year honour. 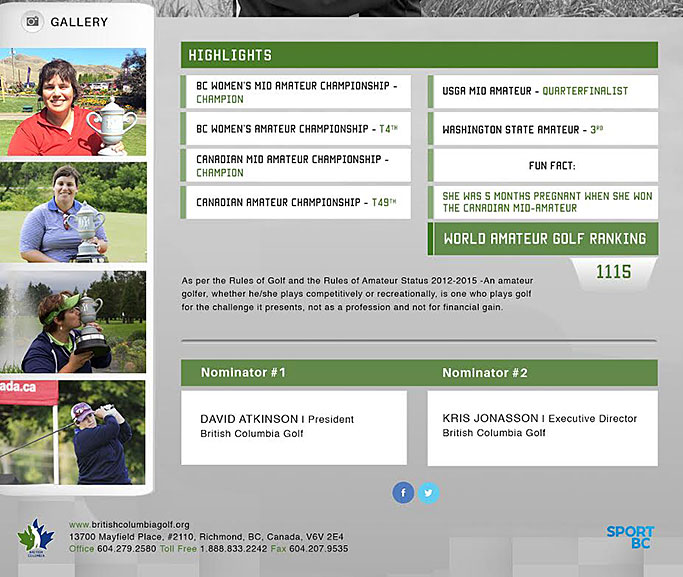 At the U.S. Women’s Mid-Amateur at Harbour Trees Golf Club in Noblesville, Indiana, Proteau wowed the crowds by playing 76 holes in 3 days while 6 months pregnant. Proteau had to win three matches in extra holes – all 3 Proteau won on the 19th hole – and had husband Jim as her caddy.

Proteau’s luck would run out on her fourth 19th hole of the championship, when four-time Mid-Amateur champion Meghan Stasi turned the tables on Port Alberni’s finest. Proteau had evened the match with a clutch birdie on the par-3 18th before falling one hole later.