Over the past few years, there has been much weeping and gnashing of teeth in the golf industry over “millennial madness”.

How can smart and tech-savvy Gen Y guys and gals NOT love a game that has fascinated their forefathers since BC’s first golf course at Jericho Beach opened its fairways in 1892?  I decided to find out…

I know…it boggles my mind too, given my love for the sport.

But I’ve also come to realize that the madness lies not with the millennials, but with golfers just like me who can’t understand why these phone-addicted folks aren’t Mini-Me versions of ourselves.

Well, they’re not, and we’ve got to get over it if we want to keep BC Golf from becoming a niche pastime for the rich and rickety.

In 2012, a study that analyzed 9 million teenagers and twenty-somethings found them to be:

• focused on money, fame and image

Ouch! But don’t panic…they also found them to be more:

• receptive to new ideas and ways of living

So I guess they’re not all that bad, even if they would rather text us from across the room than have a face-to-face conversation with us. Unfortunately the study didn’t ask them why they don’t golf.

And it seems that all the golf studies done in the past 5 years have surveyed or interviewed golfers – NOT non-golfers. Correct me if I’m wrong (I’d love to be), but I have yet to see one study that actually went out and asked the non-golfing Gen Ys why they don’t play and what could be done to the sport and/or industry to attract and retain them.

Certainly we’ve seen a ton of initiatives that make assumptions on the subject, but do they really know? You know what that say about people who ASS_U_ME. So I’ve decided to ask them myself. I’ve posted a survey on Facebook targeted at young men and women between the ages of 17 and 25.

The survey is intended to find out two things:

1. Why they do|don’t play golf

2. What they think needs to be done to make the sport more attractive to their generation

The survey will run until November 23, at which time I’ll consolidate the data and present the findings here. 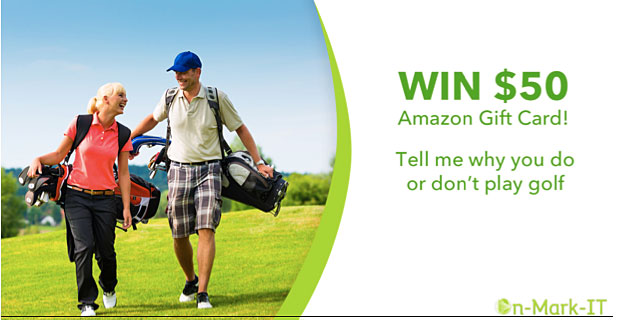 The more data we can collect from the younger generation, the more value the results will bring to the industry.

So please encourage any young people you know to complete the survey. With your help and theirs, we just might be able to turn the trend around and start to #growthegame one millennial at a time.