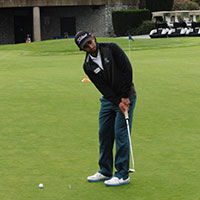 For the 24 young golfers who attended the British Columbia Golf High Performance Camp at Northview in Surrey on Oct. 18 and 19, the message and tone was set early each morning.

Coaches Jody Jackson, Matthew Palsenbarg, Helene Delisle and Matt Cella, along with TPI trainers Lindsay Manion and Nick Mueller, emphasized that while they wanted all the players to have fun and learn, each player was being evaluated.

“There is a lot of assessing going on,” said Jackson. “We are comparing you against all the other players here and we will be working with you on all aspects of your game.”

This camp will start the process of selecting the team for the Western Canada Games in Wood Buffalo, Alberta next August and each player left with a USB stick full of information that they can start working on with their personal coaches.

“We want to see a history of progress in your game,” said Palsenbarg. “We are evaluating your emotional growth, your physical growth, your ability to compete. We want you to consider it as if you’re at a tournament. This is a competitive environment.”

Saturday’s sessions included having the players divided into four groups of six and rotating through 4 different 70-minute learning stations. Jackson led her groups through 'Six Seconds' – The Emotional Intelligence Network and some of the concepts the kids embraced included learning whether they were a visual, auditory or tactile learner.

“Emotional intelligence is the ability to use emotions effectively,” said Jackson. “This is where players can access deeper levels of intelligence and I think this could be the game-changer. When you look down the driving range at a tournament, you see players with the same swing, nutrition, fitness and equipment. What’s going to differentiate you is the emotional intelligence.”

Jackson pointed out that when players are in “The Zone,” there is an effortless and timeless feeling the players in “The Zone” are experiencing and it’s a matter of playing without thinking.

When Jackson asked players who had shot final rounds in the 60s, the answers confirmed this analysis. “When I shot 69-69 in the MJT, I was just playing and not thinking,” said Alisha Lau, the 15-year-old Richmond golfer who scored very high in her emotional intelligence.

“That’s how golf is meant to be played,” said Jackson. “It’s about playing without thinking. That’s when you’re in ‘The Zone’ and we want you to be able to access ‘The Zone’ so that you can reach your full potential at every stage of your development.

Delisle was in charge of the short-game area, taking each of the students through a battery of tests ranging from lag putting to reading putts at three-foot intervals to chipping, bunker play and hitting wedge shots from 50 to 80 yards. “We want to identify where players are strong and where they need help and then we can work on those areas where we can make improvement,” said Delisle.

Cella did FlightScope readings with each of the players and while analytics are seemingly a part of every sport, Cella said he was looking for consistent results. “Players all seem to think they hit the ball further than they actually do,” said Cella. “Part of the analysis is to show players what they are actually hitting so that they know what to hit in each competitive situation.”

Palsenbarg did K-Vest 3D Motion Capture readings for each golfer and he was pleasantly surprised with the results, as many of the golfers had impeccable set-up, swing efficiency and movement. “What we see in this age group is the swings are very good, but what has to improve, and that only comes with age and maturity, is strength,” said Palsenbarg.

“These players are all at the age where they are growing into their bodies. Take a 15-year-old who has the strength to compete against 15- and 16-year-olds. We need to develop their strength so that they can compete against 18- and 19-year-olds. That’s part of the development process at this stage.”

Mueller and Manion were in charge of fitness and nutrition education for all students and if you needed proof that assessment was taking place at all times, you needed look no further than Saturday’s lunch. There was no fried food and no soda pops or energy drinks; healthy salads, proteins and water were what was on offer.

“Nutrition is a big part of your development,” said Manion. “Sugar causes energy spikes and that’s not what you want on the golf course. We want you to eat healthy snacks like almonds every few holes and we want you hydrating with water on every hole.”

While the coaches spent Saturday night processing the data collected from each student, Sunday promised to have more fun elements, but there was no let-up in the assessment and competition that Palsenbarg had promised. Sunday’s activities started before the sun rose, as Manion and Mueller took the students through a 7 a.m. kinoga session where they stretched and did yoga in the dark prior to playing nine holes on Northview’s Ridge Course.

From there, it was time to hit the course and the 24 players were split up into six foursomes to tackle the back nine. But the golfers would be challenged on each hole with a different challenge.

For example, Manion and Mueller were waiting for them on the first tee, getting their heart rates pumping before they hit their tee shots. And once they reached the fairway, they had to play their approach shots from behind a tree. “We want to see if players will make a commitment to go for the green or make a commitment to lay up,” said Jackson.

On the next hole, a par-3 with water in front and sand in the back right, the players had to hit two clubs extra, while subsequent holes involved playing a par-5 with only one club until you reached the green, getting bonus points for hitting your drive into a bunker and playing a ‘worst ball’ scramble. “It’s about testing players with uncommon situations,” said Palsenbarg. “When do you aim for a bunker or take two clubs extra? It’s part of the assessment process.”

After the players had healthy lunches - brought from home – and no sugary drinks were seen by Manion – it was time for four final 45-minute training and coaching sessions. While Cella led players through the process of developing an effective practice regime, Delisle reinforced her short-game drills, Jackson worked on the driving range with getting players to commit to every shot and Palsenbarg gave each player their K-Vest results.

Perhaps the most fun for the kids came when they went to Mueller and Manion’s fitness station, where they did core and flexibility exercises and got their sweat on. 15-year-old Khan Lee of Surrey said he learned a lot from the camp.

“I was surprised when we went out to golf and there were all these challenges on each hole,” said Lee. “I really saw how important the mental side of the game is.” Lee said he also learned from his fellow competitors, as he saw how focused Tristan Mandur of Vancouver Island was. “I talk a lot and when you see how focused Tristan is with the task at hand, it’s maybe something I need to work on, to be more focused.”

And from Alisha Lau, Lee said he admired her decisive decision-making and how creative she is. “There are so many good players here and I’m glad I was invited, but I know there are things I have to work on.” That’s perhaps music to the ears of the coaches who now have a bigger snapshot of each player prior to the final decisions for the Western Canadians next spring.

“We gave each player three takeaways that they can work on with their coaches this winter,” said Palsenbarg. “Each player has an idea of what they need to work on and we’ll look at what progress they make before we make any decisions.”