Rank, 27, finished the championship tied with Rob Couture of Dallas, Texas at 4-under 284 after Couture forced the pair into a playoff by birdieing the par-5 18th hole in regulation.

The pair headed back to No. 18 tee for the first playoff hole, where Rank found the right rough off the tee. He went on to hit a magnificent 3-iron, leaving just 20 feet for eagle, putting the pressure squarely on Couture.

“It wasn’t a great lie, it was advanceable and I knew I could get some club on it,” Rank said. “I just took one extra club and it came out perfect. When it was in the air I knew it was going to be pretty good.”

After Couture’s approach from the fairway came up short, he left his third shot 20 feet below the hole and couldn’t convert his birdie putt after watching Rank’s eagle putt slide by. The stage was then set for Rank who was left with only a tap-in birdie for the victory and a spot in the field at the 2015 RBC Canadian Open at Glen Abbey Golf Club.

“The reason I came here was to win and I was trying to get into the RBC Canadian Open,” Rank said. “Anytime you can win a national championship is a huge honour and I’m glad I pulled it out.”

The Elmira, Ont. native carded rounds of 73-70-69-72 to finish the championship at 4-under 284. His win adds to the list of successes the Team Canada National Amateur Squad program has amassed this season.

“The boys [Team Canada] have been playing really well, we’ve got a lot of trophies to the Golf Canada and Team Canada name in the last couple of years and it’s nice to just add another one my behalf,” he continued.

In the Mid-Master division, second round leader Darren Shaw narrowly missed a spot in the playoff for the overall title after a final round 2-under 70 that left him in solo third. The Stoney Creek, Ont. native ran away with the Mid-Master division finishing seven strokes ahead of Dwight Reinhart of Renfrew, Ont. at 2-under 286.

Complete scoring and results can found online by clicking here.

BARRIE, Ont. (Golf Canada) – Rob Couture edged into the lead at the Canadian Men’s Mid-Amateur Championship after a third round 3-under 69 at Barrie Country Club.

Couture, of Dallas, opened a three-stroke lead at the turn after a front-nine 4-under 32, but carded two bogeys on his closing stretch to finish a stroke ahead of Team Canada’s Garrett Rank at 5-under 211.

“I feel like obviously I can get it done and it’s one thing to hope you can get it done and think you can get it done but I know I can,” said Couture, the 2011 Mid-Amateur champion. “I don’t think there’s any concern with Garrett either, he’s won plenty of tournaments and he knows that he can do it too so I’m just going to go and try to play a really good round of golf, add it up at the end and see what happens.”

Playing alongside Couture, Rank of Elmira, Ont. cut into the lead with a back nine 2-under 34.  His third round 3-under 69 leaves him in striking distance of a spot into next year’s RBC Canadian Open and a second national championship title — Rank captured the Canadian University/College Championship Individual title in 2012.

“I finished well, I made three birdies in the last six holes so that was good because I think at one point he [Couture] had stretched out to five or six ahead of me,” Rank said. “I like being one back better than two back but I can’t really worry about what he’s doing. I just have to go out there tomorrow, control what I can control, stick to my game plan and continue to play some pretty good golf.”

Windsor, Ont.’s Michael Rutgers will join the final pairing on Friday after carding even-par 72. Rutgers sits in solo third at 1-under 215 for the championship, while Darren Shaw of Stoney Creek, Ont. is in fourth at even-par 216.

Shaw, the overnight leader, struggled in the third round with a 3-over 75, but remains ahead in the Mid-Master competition by three strokes over Calgary’s Kevin Temple.

The champion of the 2014 Canadian Men’s Mid-Amateur Championship will earn an exemption into the 2015 RBC Canadian Open at Glen Abbey Golf Club.

BARRIE, Ont. (Golf Canada) – Darren Shaw’s 5-under 67 lifted him into the top spot on the Canadian Men’s Mid-Amateur leaderboard after the second round at Barrie Country Club.

The Stoney Creek, Ont. native carded six birdies on Wednesday and closed with a 3-under 33. His back-nine was highlighted by an incredible greenside up-and-down on the par-5 9th hole for birdie and the outright lead.

“It feels good, honestly I played better golf yesterday and couldn’t make a putt,” Shaw said. “I changed putters today and I made some putts, I switched to this one and it seemed to work.”

At 3-under 141 for the championship, Shaw currently leads by a stroke over of Rob Couture of Dallas, Texas. He also sits four strokes ahead of Calgary’s Kevin Temple and Dwight Reinhart of Renfrew, Ont. in the Mid-Master (40+) title race.

Couture, the 2011 Mid-Amateur champion, carded an even-par 72 and sits in solo second in the overall competition, one-stroke ahead of Team Canada’s Garrett Rank of Elmira, Ont. and Michael Rutgers of Windsor, Ont. Rank and Rutgers both finished runner-up at last year’s championship in Edmonton.

“I struggled early, I really didn’t play well until probably the last 13 or 14 holes,” Couture said. “I was a couple over early and I just didn’t hit very good shots for whatever reason, but I hit it well the last 10 or 12 holes and got it back to even.”

In the Inter-Provincial team competition, the Team British Columbia contingent of Victoria’s Kevin Carrigan, Vancouver’s Patrick Weeks and Sandy Harper of Nanaimo held onto their opening round lead to win the overall title by four strokes over Team Alberta. The trio finished at 1-over 289 for the 36-hole championship.

The champion of the 2014 Canadian Men’s Mid-Amateur Championship will earn an exemption into the 2015 RBC Canadian Open at Glen Abbey Golf Club.

Barrie, Ont. – Rob Couture took control of the Canadian Men’s Mid-Amateur Championship after a 2-under 70 at Barrie Country Club on Tuesday.

“[The golf course] is very good, it’s the kind of golf course that if there wasn’t any wind you could certainly make a lot of birdies and shoot a good score but especially in wind like this anything under par is a good round,” Couture said. “The greens get quick, you can certainly get in the wrong spot and there’s not much you can do to two putt in some areas.”

The Dallas, Texas native made five birdies during the opening round and closed with a clutch par save on the par-5 18th to finish atop the leaderboard heading into Wednesday’s second round.

“I putted well, I didn’t get off to a great start, I bogeyed No. 2 from 95 yards in the middle of the fairway but then I chipped in on No. 4 off the front of the green for birdie to get back to even,” Couture said of his turning point on course. “That’s kind of something that can change things a little bit so that was good and from there on I played pretty solid.”

Carrigan and Jones currently trail Couture by a stroke after opening with a pair of 1-under 71’s. Jones birdied the difficult par-4 17th on his closing nine to grab the lead in the Mid-Master race by two strokes over Toronto’s Dennis Kavelman, Calgary’s Kevin Temple and Paul Coulson of Biblehill, N.S.

In the Inter-Provincial team competition, the Team British Columbia contingent of Kevin Carrigan, Patrick Weeks and Sandy Harper leads by two strokes over Team Alberta after carding an even-par 144.

A strong contingent of Canadian and international players are set to compete at the Canadian Men’s Mid-Amateur Championship from September 15-19 at Barrie Country Club in Barrie, Ont.

A field of 156 players from Canada and the United States will vie for the coveted exemption into next year’s 2015 RBC Canadian Open at Glen Abbey Golf Club. 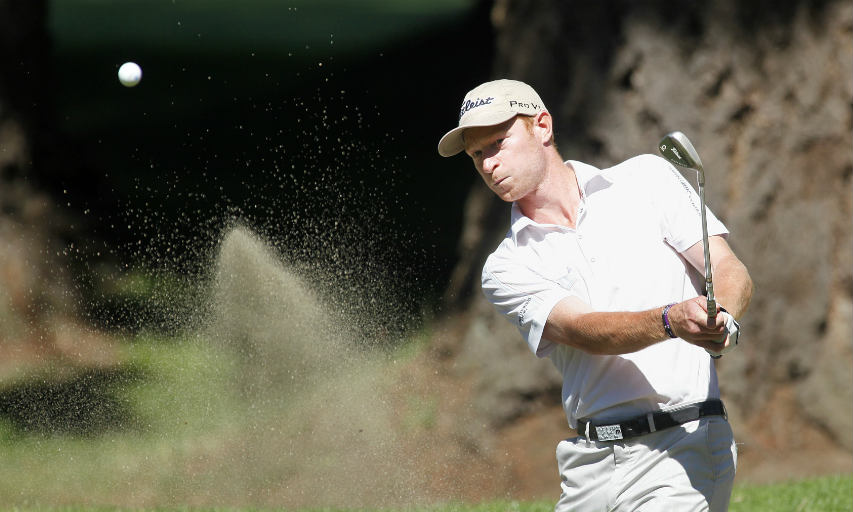 Kevin Carrigan, the reigning two-time Canadian Men’s Mid-Amateur Champion, is set to defend his title at Barrie after a record setting performance in Edmonton last year. Carrigan finished the championship at 20-under 264 to win by 11 strokes over Team Canada’s Garrett Rank and Ontario’s Michael Rutgers at Blackhawk Golf Club.

“We have an extremely strong field again this year and it should make for a very exciting championship,” said Tournament Director Cam Crawford. “Barrie Country Club will surely test the top international and Canadian talent as they vie for that coveted exemption into Canada’s National Open Championship.”

Set to contend against Carrigan for the Mid-Amateur title will be Team Canada’s Garrett Rank of Elmira, Ont., who enters the event as the highest ranked player in the field at No. 95 in the World Amateur Rankings. The 27-year-old recently finished tied for sixth at the Canadian Men’s Amateur Championship and also tied for second at the prestigious 2014 Players Amateur Championship.

In the Inter-Provincial Team competition, the Team Ontario contingent of Bunker, Dean Henry and Michael Farrugia will look to defend last season’s eight-stroke victory over Team Nova Scotia. The team competition takes place over the first 36 holes of play, with the low two of three scores counting towards the final two-day team total for the R. Bruce Forbes Trophy. Additionally, the Men’s Mid-Master (40+) competition runs concurrently over the 72-hole championship.

Barrie Country Club has played host to multiple amateur and professional events over the years.  Highlights include the Ontario Open (1975), Ontario Ladies Amateur (1976, 1989), Ontario Men’s Amateur (1985), and the PGA of Ontario Championship for ten consecutive years (2003-2012).  Canadian Golf Hall of Fame members Marlene Stewart-Streit, Moe Norman and Bob Panasik have all won events played at Barrie Country Club.
“Everyone at Barrie Country Club is excited and we’re ready for the championship to get started. Our outstanding golf course has challenged our members along with the top amateur and professional players for many years,” said Bill Wogden, Head Professional.  “Now that we’re in our 101st year operating in the Barrie community, the quality and conditioning of our course and the amenities of our club have never been better. We’re looking forward to welcoming the competitors and encourage spectators to come out and enjoy amateur golf at its finest.”Championship play will be conducted Tuesday, September 16 to Friday, September 19, with 18 holes of stroke play each day. The event will be contested over 72 holes with the field being reduced to the low-70 golfers and ties after the second round.More information on the championship can be found here.