Diego San Pedro secured the 2014 Juvenile Boys’ Championship title with a one-hole play-off victory, while Shirin Anjarwalla held on to become the Juvenile Girls’ champion on Thursday at Royalwood Golf Course, after leading all three days of competition. 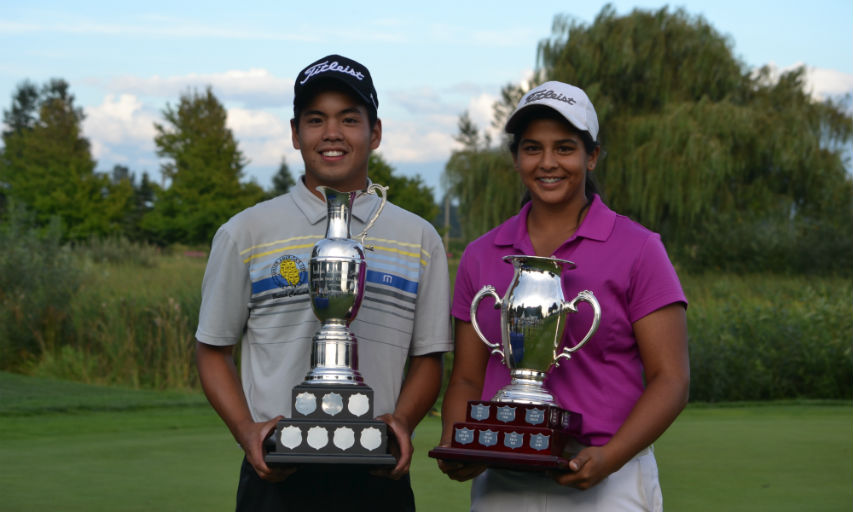 San Pedro’s first play-off hole tee shot found the middle of the fairway, while Jaewook Lee drained his into the water hazard. His opponent’s error and added stroke left the 16-year-old some breathing room and despite bogeying the hole, he became this year’s Boys’ Juvenile champion.

“I knew I had a good chance [to win] because going into the final Jaewook was 4-under and I was -2, and I felt a little pumped on the first tee so that’s always a good start. It’s good to pull it off in the end,” San Pedro said.

After sitting comfortably in third place and within strokes of the lead on both days one and two, San Pedro made a surge for the title with just a few holes remaining to play. He forced a play off against Lee after an eagle and two birdies in left him tied for first at 6-under.

“On hole 14, the par-5, I had a chip and I told them to take the flag out because I knew I had a chance to chip it in and it went in,” said San Pedro.

“So I fist pumped a little bit and that got me going real fast, the adrenaline started coming and I finished strong.”

Lee (72-68-70), 15, led after the second round and remained even at the turn, but applied some pressure with a pair of late-round birdies to hold on to his share of the lead and force the playoff.

A.J. Ewart (66-77-68) finished in third with an exciting final-hole birdie aided by a great tee-shot landing just feet from the pin. The 15-year-old from Coquitlam shot the championship low-score on the first day of play.

Roy Kang (-4) and Keaton Gudz (-1) also both finished under par for the Championship.

Anjarwalla shot -1 (72) on her final round on the way to becoming the 2014 Girls’ champion. The 14-year-old from Nanaimo cultivated her lead early and would hold on over three days of tough competition finishing with scores of 68-67-72.

“I played really good, I think my first two rounds were the best I’ve ever played so I was really proud of myself,” said Anjarwalla.

Over the course of 54 holes, Anjarwalla only made three bogeys but made an outstanding 15 birdies.

“I was just thinking ‘Ok, don’t try to play so aggressive, just try to make your pars. If birdies fall then they’ll fall but don’t play just for birdies’. I was just trying to stay to my game plan and keep steady,” she explained.

Ko (69-70-69), the 2014 BC Junior Girls’ Champion played with consistency and finished just a single stroke behind Anjarwalla at -11, after playing a stellar final round, finishing 4-under for the day.

Lee and Gavin Ciulla of Surrey finished in first in the best-ball competition combining for a remarkable 21 birdies, one eagle and just a single bogey. The pair finished -22 (194) after three rounds.

Shirin Anjarwalla increased her lead in the 2014 Girls’ Juvenile Championship to four strokes after finishing 6-under 67. Anjarwalla, 14, currently at -11 for the Championship, played a bogey-free round that included three consecutive birdies in to secure her a substantial lead heading into the final day of competition. 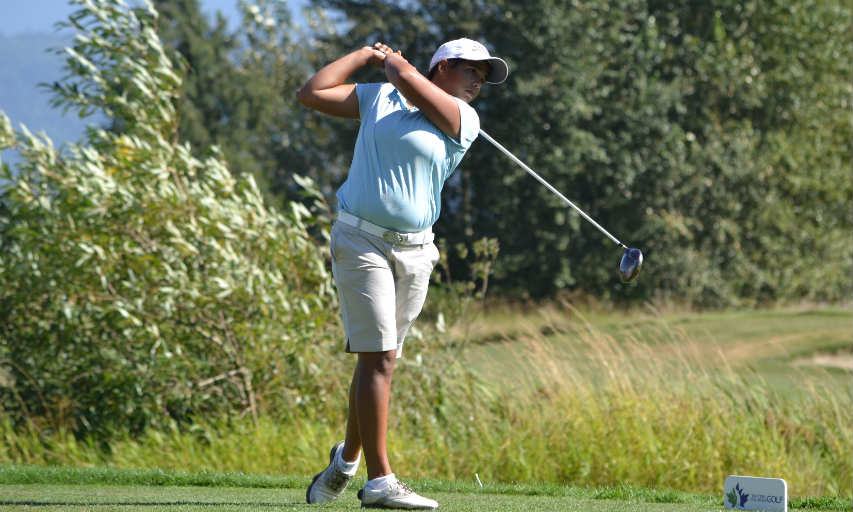 The Nanaimo Golf and Country Club member bettered her first round score by one and finished as one of only two female golfers under par for the day.

Not allowing Anjarwalla to get too comfortable with the lead is 2014 Junior Girls’ Champion, Naomi Ko, 16, at -7 after firing a 3-under par 70. The Team Canada member was 1-over at the turn, but played a strong back nine, carding four birdies.

With four strokes separating her from second place, Hannah Lee rounds out the top three in the Girls’ Championship. Lee shot even par for the day, moving up the leaderboard, and currently sits at 3-under as the final competitor under par.

Jaewook Lee took over the lead in the Boys’ Championship finishing at a 4-under 68 bettering his first round score by four strokes. Lee came out of the gate strong, 4-under par at the turn, and held on to lead the Championship after two rounds by one stroke. 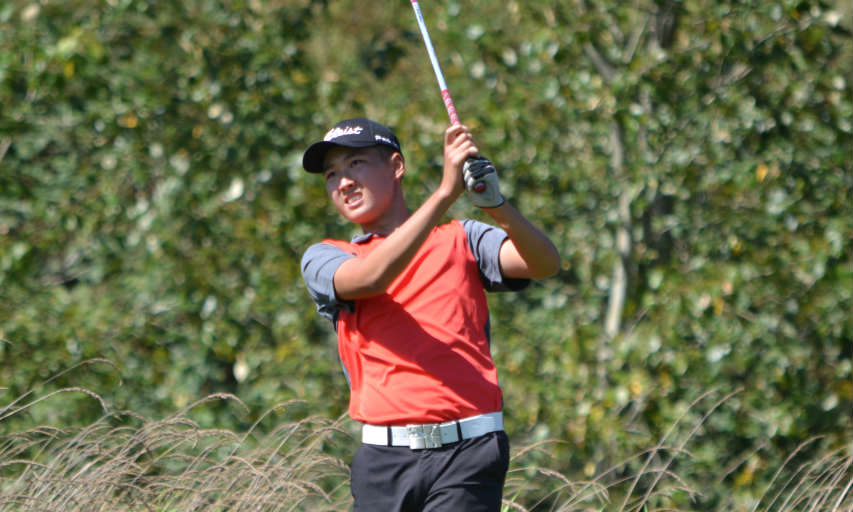 Lee is closely followed by Owen Xiong (-3), who maintained his place in second, finishing +1  Coming up to the turn, Xiong carded three back-to-back bogeys but rebounded enough on the back half to hold on to his second place standing.

Diego San Pedro, at third, also held onto his position, firing a 1-over 73. The 16-year-old (-2) managed to hold on to his standing despite adding four strokes to his first round score on day two of the Championship.

Keaton Gudz, Roy Kang, AJ Ewart and Kyle Leiman will all begin the final day of competition a single stroke outside of the top three at 1-under.

Zone Four held on to win the Zone Team competition that was conducted over 36 holes. Alex Francois, Roy Kang, Sy Lovan and Diego San Pedro finished 4-under as a team (428) and combined for seven eagles and six birdies on their way to winning the competition.

Total of 14 competitors under par at the BC Juvenile Championships
August 26, 2014
Morgan Gibbens (British Columbia Golf)

Anjarwalla shot 68 (-5) with only a single bogey disrupting her scorecard on the first day of competitive play but is only a single stroke ahead of three competitors tied in second. 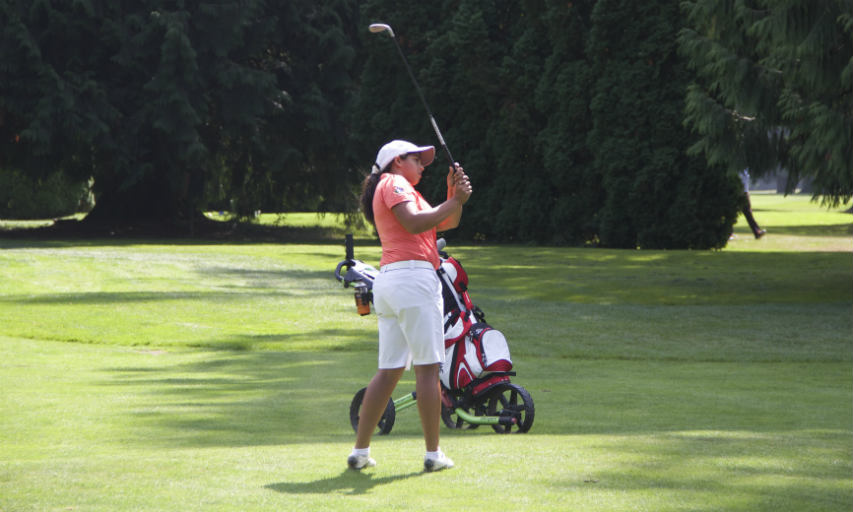 Mary Parsons, Alisha Lau, and 2014 Junior Girls’ Champion, Naomi Ko finish the first day of competition shooting 4-under 69. Delta resident, Parsons, never shot over par once during her round. Lau had one of the strongest back halves of the Championship carding five birdies in, four of which came consecutively. Ko’s round was highlighted by six birdies, as she looks to improve on her second place finish from last year, in her final year of eligibility for the Juvenile Championship.

Hannah Lee (-3) and Tiffany Kong (-1) also finished under par on Tuesday and are well within reach of the lead.

Ewart heads into the second day of competition with a two-stroke advantage over the next competitor after an impressive six birdies out pulled him in front of the field.  Ewart, 15, shot six-under-par 66 to set him ahead of the competition, but a total of eight players finished day one in red.

Owen Xiong of West Vancouver trails Ewart by two strokes, sitting solo in second place. The 16-year-old doubled the first hole and bogeyed again on the third but his struggles would end there. Xiong eagled number six and birdied four times in to begin day two in striking distance of the lead.

Kyle Leiman and Diego San Pedro are tied only a single stroke behind Xiong at -3 (69). Leiman played a strong front nine including an eagle followed by two consecutive birdies but couldn’t maintain the momentum on the back half. San Pedro, 16, was even through nine but played a bogey-free back half that allowed him to move into the top three.

Roy Kang, Nicholas Miu, Khan Lee and Isaac DH Lee all finished under par on the first day of competition.

Zone Five, consisting of Tristan Mandur, Keaton Gudz, Bryce Krakowec-Tickner and Kyle Leiman finished at two-under, refusing to let the Zone Four team get comfortable on top of the leaderboard.

The 2014 Girls’ and Boys’ Juvenile Championships will be contested August 26 – 28, and mark the final British Columbia Golf provincial championships of the season. The province’s finest young golfers aged 16 and under will meet in the Fraser Valley to take on Royalwood Golf Course in Chilliwack to compete for the titles.

Last year’s champions, brother and sister duo Alex and Sumie Francois, will both return to defend their respective titles and if either can successfully defend, it will be the first time in the Championships’ histories that there is a repeat winner.

S. Francois opened last year’s contest with the lowest score of the Girls’ Championship, shooting a 69, and despite struggling on the second day of competition was able to rally back from behind to claim the title.

A number of other familiar names, however, will challenge the defending champ, including 2014 BC Junior Girls’ Champion, Naomi Ko. Ko finished T2 in the 2013 Juvenile Girls’ Championship and has had a strong, title-earning season this year. Shirin Anjarwalla, who recently won a gold medal at the BC Summer Games, will also return as a name to watch competing for the title. Anjarwalla led for a portion of last year’s competition but with a third round 76 slipped to fourth.

The girls will compete in 54 holes of stroke-play competition with no cut, unless the field size warrants.

A. Francois ran away with last year’s title, finishing seven strokes ahead of the second place competitors after three days of exceptional play (70-69-69) at Crown Isle Golf Club, he made a strong push to solidify his win with an eagle and two birdies in the last four holes of play. The Shaughnessy Golf and Country Club member has had a successful competitive summer and was selected to represent British Columbia internationally over the past few weeks, but will not be without strong competition for the Juvenile title.

2014 BC Games gold medalist, Sy Lovan, will look to improve on his last year’s fourth place finish in his final year of eligibility for the championship.  While last year’s Bantam Champion, Roy Kang, will also be one to watch after a successful 2014 campaign that included a sixth place finish at the British Columbia Amateur at only 15 years old.

The boys compete in 54 holes of stroke-play with a cut to 60 and ties after 36 holes.

The Zone Team competition will be held for both boys and girls with the four-person teams selected prior to the beginning of competition. The low three of four scores each day count towards the team score; the competition is conducted over 36 holes.

Both the boys and girls will also compete in the best-ball competition that in 2014 replaces the club team competition. Players may select a partner from the field prior to the start of play on day one and compete through 54 holes.

All spectators are welcome at Royalwood Golf Club for the final British Columbia Golf provincial championship of the 2014 season. Follow on social media using the hashtag #BCJuvenile.