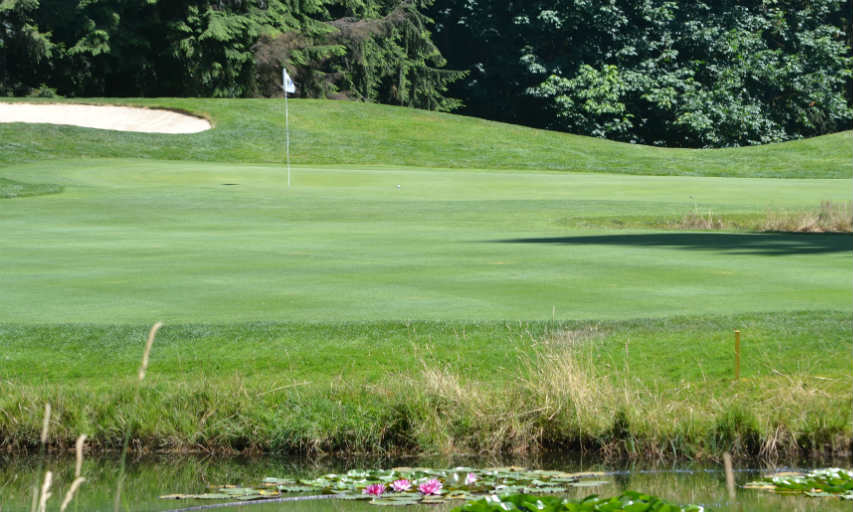 The editor asked for a column on “par.”

“My good man, your ‘par’ is a deceitful harlot whose insidious false promises inevitably lead to broken dreams and shattered hopes.” (OK, so I just came up with that now, but that would have set him back on his heels, I bet. In any case, I accepted the assignment.)

Despite what you may think, the word “par” did not originate in golf. It denoted something that was average, acceptable. Eventually, it made its way into golf’s lexicon in the early 20th Century to denote the arbitrary standard for the number of strokes, based on the length of a hole, that a proficient golfer should take on that hole. It also sounded a death knell for the dominance of match play, particularly in North America.

For the next few decades, although many golf competitions continued to be contested as matches, the concept of aggregate stroke play based on par was making inroads. One of the last professional holdouts was the PGA Championship, being played this week in Kentucky. It was a match-play tournament until 1958, when the commercial and entertainment realities of television pressured it to switch to stroke play.

One of the most significant mementoes of my life in golf is a trophy awarded to the club champion a few years back. It was a titanic struggle, one for the ages. (Did I mention I won?) To recap: Nerves jangling, barely breathing, I started out with two triple bogeys, a sketchy par and a double bogey. My opponent, who had a similar handicap factor to me, went par, bogey, par, par. I finished the round five shots behind my opponent, but I won the trophy on the second extra hole.

No doubt you are shaking your head and saying. “Huh? How does that work?” Easy. It was our club’s match-play championship.

In the match I mentioned, it didn’t matter that I was seven strokes behind my opponent after the first four holes. I was down just three holes, having lost the first two, halved (tied) the third and lost the fourth. (If it was a stroke-play competition, my fate would have been sealed before we made the turn and I would have been hailing the beverage cart.) But in match play, hope springs eternal. By the time we reached the 18th green, I had won those three back and we were all square. We halved the 19th and I had a par to his bogey on the 20th. Despite stumbling badly out of the gate, I had won.

To say my opponent and I were exhausted is an understatement. He was buoyant about being three holes up after four played but decided to play defensively. In contrast, I took some chances that paid off and there I was, looming in his rearview mirror. Down two holes, then just one. Suddenly, short putts that had been conceded earlier in the match were not being conceded. Despite being the best of pals, we became the lockjaw twins. No quarter asked and none given. We were grinding, battling not only the course and our swings, but each other, as well as the many and conflicting emotions swirling around inside our noggins. It was a great match, a draining physical, psychological, emotional, strategic battle. It was “mano a mano,” just the two of us. Old Man Par, that uninvited third wheel, was not welcome.

So you can keep your par and your stroke play. Give me match play anytime.

Dean Ryan concurs. Ryan, a Golf Canada Governor, is a past Golf Canada Rules Chairman and still sits on the organization’s Rules Committee. I caught up with him on the phone as he was arriving at this week’s Canadian Men’s Amateur in Winnipeg after spending a week in Niagara Falls, presiding over the Canadian Junior Boys Championship.

Ryan got my attention when I read his excellent column, Stop The Stroke Play Insanity!, in the latest issue of Ontario Golf News, which coincidentally arrived in my inbox as I was thinking about this piece. (I won’t rehash Ryan’s thoughts, but you should read them here.)

“When golfers first try match play, they are delighted by its simplicity and forgiveness,” he told me. “Most of us are inconsistent golfers and match play takes the pressure off. North America is one of the few places around the world where match play and Stableford are not played frequently. In both formats, you can have a few bad holes and carry on. Not in stroke play.”

In fact, Ryan thinks match play “could be one of the saviours of the game,” not just for the reasons he mentioned above, but because it takes less time to play than stroke play because putts and even holes can be conceded to your opponent without having to grind out every shot. Just pick up and move on to the next tee. But, just like in stroke play, you must post a score for handicap purposes after every match-play round, even if you don’t complete a hole or holes.

“If in match play, the player is conceded a putt or hole mid-stream, there is a decision to make for score posting. There is a specific decision to help explain this.

“Section 4, Adjusting Hole Scores, says that a player who starts, but does not complete, a hole records for handicap purposes the ‘most likely score.’ This score must not exceed the player’s maximum number under Equitable Stroke Control.

“’Most likely score’ is a judgment that each player must make based on his or her own game. It consists of the number of strokes already taken plus, in the player’s best judgment, the number of strokes needed to complete the hole from that position more than half the time. The player must evaluate each situation based on what the player can reasonably expect to score.

“The grey area is if John has an eight-footer. John is a superior putter, so maybe he makes that putt. Craig, on the other hand, would be lucky to two-putt from there. Go to five feet, three feet, etc. You get the idea. It depends on you—you get to decide what that would be based on your own game, not someone else judging for you. Just like calling a rules violation on yourself.”

Faster rounds, simpler, less intimidating, more forgiving. Could match play, as Ryan suggests, be one of the saviours of golf in these trying times?