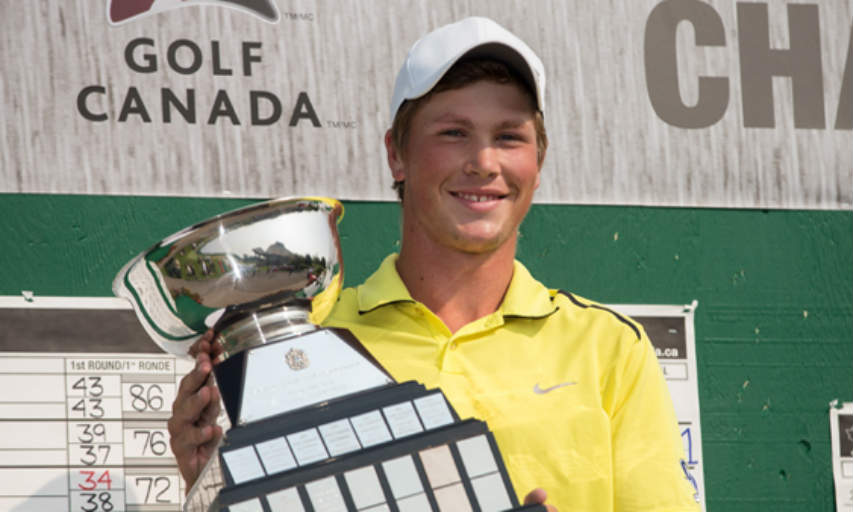 James gained momentum in Wednesday’s second round, which continued into Thursday due to a weather delay, when he matched the course record with an 8-under-par 64. He continued his strong play in Thursday afternoon’s third round, which was suspended due to darkness when James was 2-under through nine holes.

“I tried not to let [the suspensions] affect anything and just kept playing the way I was playing,” said James after Friday’s awards ceremony. “It was a good test to see if I could do it mentally and I’m happy I did.”

It was evident that James did not let the week’s suspensions faze him. He finished the third round with a score of 4-under-par 68, and began his fourth round just a few hours later. His final round even-par 72 was highlighted by an eagle on the par-5 sixth hole and led James to finish with a score of 15-under-par 273 for the championship.

James’ victory comes just one week after his older sister, Team Canada member Augusta James, claimed the Canadian Women’s Amateur Championship. Their simultaneous victories make them the only siblings to have won Canadian national championship titles in the same year.

“I will definitely remember this moment for a while, I’m really blessed to have her as a sister. She’s a really good golfer, so it’s great to try and compare myself to her.” James said.  “Obviously her win last week was incredible, winning by six at such a big event with such strong competition. I really have her to thank for this week, it kind of made me believe that it was possible, and that I could win something like this.”

Following James by four strokes to finish in second was Team Canada Development Squad member Tony Gil, 16, of Vaughan, Ont. Gil’s final combined score of 11-under-par 277 crowned him the Juvenile Boys Champion. He also broke the course record of 8-under-par 64, originally set by Patrick Murphy and matched by James earlier this week, with a 9-under-63 in the third round. Murphy, 17, of Crossfield, Alta. finished in third at 10-under-278 for the championship.