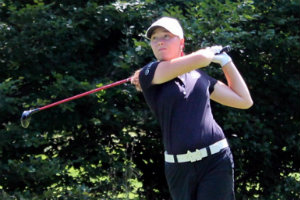 Thornhill, Ont. (Golf Canada) – Grace St-Germain carded a third round 1-under 71 to head into the final round atop the leaderboard at the Canadian Junior Girls Championship at Thornhill Golf and Country Club.

St-Germain’s third round was highlighted by six birdies, including one on the final hole, that gave her the outright lead over Team Canada Development Squad member Valérie Tanguay.

“Valérie was playing really well and I was having a couple of bogeys and I just tried to come back,” St-Germain said. “I was just trying to make birdies and sometimes my putts just wouldn’t go in or my drive would bounce out into the rough and I just tried to keep it together.”

The 15-year-old Ottawa native sits one-stroke ahead of Tanguay at 5-under 211 after rounds of 70-70-71. After her third round she admitted to nerves playing a factor on Thursday.

“I’ve been quite nervous, I was given some good advice just to stay calm, stay in the moment and relax so I’ve been trying to do that,” St-Germain continued. “Tomorrow I’m just going to play my best and see what happens, I still haven’t totally grasped [being in the lead] yet.”

Tanguay, of St-Hyacinthe, Que., opened her third round with a 3-under 33 and held the outright lead on the closing nine until carding a double bogey on the par-4 14th hole. The 18-year-old currently sits at 4-under 212 heading into the final round, while Selena Costabile of Thornhill, Ont. jumped into third place after a 3-under 69. Costabile, 16, sits at even-par 216 for the championship and will play in the final pairing on Friday.

After 54 holes, Team Canada Development Squad member Naomi Ko sits in fourth place at 6-over 222, while Courtney Tolton of Mitchell, Ont. and Michelle Kim of Surrey, B.C. share fifth place at 7-over 223.

In the Juvenile Division (16 and under), St-Germain leads by five strokes over Costabile.