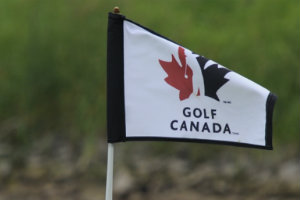 Niagara Falls, Ont. (Golf Canada) - Play at the 2014 Canadian Junior Boys Championship at Legends on the Niagara was temporarily suspended today due to dangerous playing conditions after strong storm cells rolled through the Niagara Falls, Ont. area Wednesday. Play was suspended for the first time at 11:12 AM EDT, and was suspended for the day at 4:15 PM EDT after an attempted resumption of play.

At the time of suspension, overnight leader Patrick Murphy, 17, of Crossfield, Alta. sits in a tie for the lead with Austin James, 18, of Bath, Ont. Team Alberta sits unofficially in first in the Inter-Provincial Championship at 8-under-140. 78 players have yet to begin the second round.