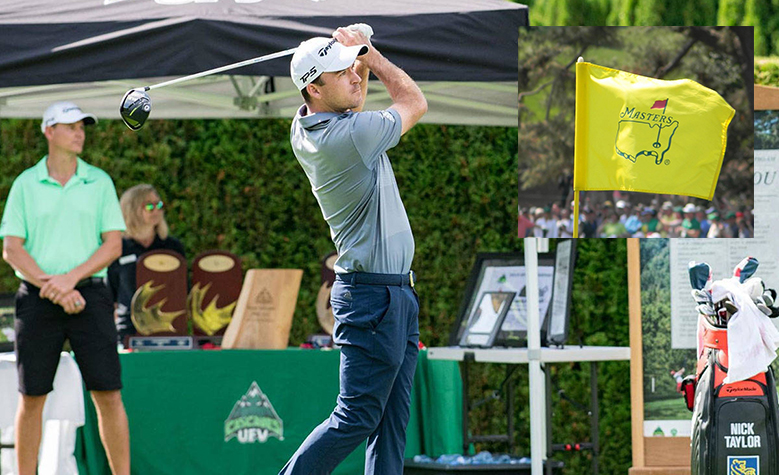 Abbotsford, BC's Nick Taylor Has His Eye On A Return To The Masters After His First Experience At Augusta - File Photo

Nick Taylor’s first Masters experience included 17 birdies, a four-putt, an anxious Friday night and Saturday morning sweating out the cut and countless great memories of his week at Augusta National.

He hopes to do it all again someday soon.

“I was hoping for a really low one today to maybe sneak into that top 12, but I will do everything I can to get back here, that’s for sure,” Taylor said over the phone after Sunday’s final round.

Taylor’s Masters debut must be considered a success. He finished the tournament at three-under par and tied for 29th. He shot three even-par rounds of 72 and recorded an impressive three-under 69 in Saturday’s third round, when he made seven of those 17 birdies.

Taylor wasn’t at all sure he’d be playing Saturday after a bogey on the 18th hole to end Friday’s second round left him at even-par. It wasn’t until the second round was completed Saturday morning that Taylor learned he had made the cut and would play the weekend.

“Obviously, it was stressful Saturday morning watching on TV and hoping to play and not really knowing,” he said. “I am really happy it went my way and I was able to play the weekend. It turned into a really good week in addition to a really great experience.”

Despite the fact there were no spectators and the tournament was being played in mid-November instead of early April, Taylor was delighted with the experience of playing in a tournament he has been watching on television since he was a junior member of Ledgeview Golf Course in Abbotsford.

“The golf course is amazing, kind of everything you could expect. I felt like from the first (practice) round I played last Sunday to now it was amazing how much the course changed. There was a bunch of rain Thursday, but the greens definitely sped up as the week went on.”

Taylor knows he didn’t see Augusta National with all of its teeth bared. “I don’t think I really got the full Augusta National experience of firm and fast,” he said. “There are definitely some severe slopes around some greens.

Today, for example, on the sixth hole Louis (Oosthuizen) hit his shot short right and typically he said it would have come back down about 30 yards short of the green. But it just kind of plugged and stopped. . .But as a whole the golf course certainly meets the expectations you have before you come here. Everything was awesome.”

Even though the greens were not as hard and fast as normal, Taylor said they were still extremely challenging. He four-putted the sixth green on Thursday. “I got that out of the way in the first round,” Taylor said with a laugh.

About the only disappointment came on the 13th green, where he missed two good eagle opportunities from about seven feet on Friday and 15 feet on Sunday. “I was trying my hardest on 13 to make an eagle and get a crystal, but it didn’t go my way,” he said.

Fellow Abbotsford product Adam Hadwin missed the cut by one shot in what was his third Masters appearance after shooting rounds of 74 and 71. It was only the third missed cut of the 2020 calendar year for Hadwin. Taylor and Hadwin are both in the field for this week’s RSM Classic in Sea Island, Ga. After being originally listed as a second alternate, Merritt’s Roger Sloan, also has drawn into the field.

LOUIS LOVE: Taylor played Sunday’s round with a couple of major winners, Louis Oosthuizen and Justin Rose. Oosthuizen, who was in contention early in the tournament, was getting some Twitter love from the folks at Tobiano Golf Course in Kamloops.

The South African has a sister-in-law who lives in Kamloops and has been a regular visitor to the area the past several summers. When he’s in town Oosthuizen occasionally practises at Tobiano and has played the course a few times.

“He often comes out and hits balls,” says Tobiano general manager Terry Smith. “He doesn’t always tell us he’s coming, but he has been nice enough to post a couple of videos of the course and he has rated us in his top five courses in the world.

“He is a really nice guy. He is super-friendly. . .The last time he was here was last summer. The weather turned and he got rained out on No. 5 so he came into the clubhouse for an hour or so and quite a lot of people were able to talk to him.”

LIFE OF RILEY: Former B.C. Junior champion Riley Wheeldon of Comox tied for eighth at the Nevada Open in Mesquite. Wheeldon was just one shot out of the lead heading into the final round of the $150,000 event, but a one-over 73 dropped him down the leaderboard. He finished the 54-hole event at 12-under par, five shots behind winner Taylor Montgomery of Henderson, Nev. Kimberley’s Jared du Toit tied for 56th at four-under par.

CALLING ALL SNOWBIRDS: With many snowbirds forced to stay north of the border this winter, Golf Vancouver Island is trying to lure them west. It has created a Victoria Snowbird Golf Vacation that includes 30 nights accommodation at 4- or 5-star hotels and four rounds at each of Olympic View, Highland Pacific, Bear Mountain and Arbutus Ridge golf courses.

Rates range from $3,250 to $4,025 per person and include power carts and all taxes. “At this time of the year people are looking to go south and of course that’s not an option this year, so we have been getting eight to 10 times the amount of calls we normally would about packages to come out and play here,” said reservations manager Patrick Meagher.

UNDER REVIEW: Pender Harbour Golf Club has appointed golf architecture firm Logg + Partners to conduct a hole-by-hole review of the 3,095-yard par-36 layout. The goal is to create a vision to guide future plans and prioritize renovation work to be conducted with course superintendent Allan Dewald. PHGC operates as a Society under the B.C. Societies Act.

“Not only is PHGC a memorable golf experience and wonderful example of successful community golf, it is also an example of passionate, innovative, forward-thinking people who have come together over their love for golf,” said Vancouver’s Oliver Tubb, design associate at Lobb + Partners.

“We are really excited for this opportunity, and look forward to working with Allan and his team, along with the society members, to help craft a sustainable vision and plan for course improvements.”