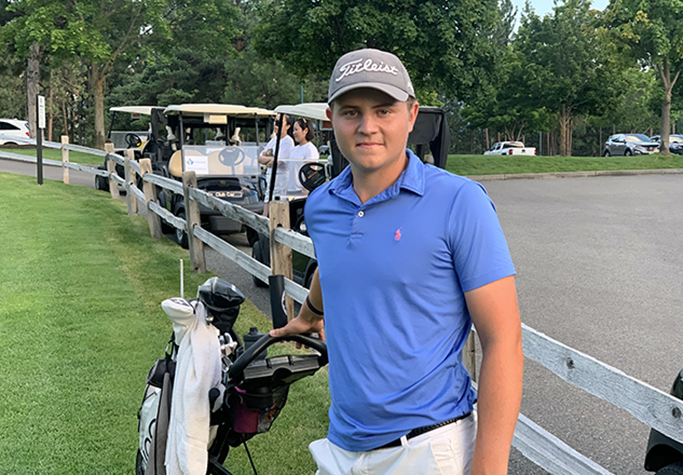 KELOWNA -- The Bear had some bite in Tuesday’s first round of the B.C. Amateur Championship.

The feeling heading into the 118th playing of the event was that the Bear Course at Okanagan Golf Club was ripe for the taking. Its four par 5s are reachable for many in the 156-player field and there are two or three par 4s that are drivable for the long hitters.

It was going to be a birdie-fest. Except it wasn’t. Not in the first round anyway.

When a very long day was done, Delta’s Russell Howlett had the lead after his two-under par 70. Ten players are tied for second one shot back.

“I thought the scores would have been lower, for sure,” the 18-year-old Howlett said. “I played a MJT (Maple Leaf Junior Tour) event here last week and there were some lower scores.”

Of course, The Bear was a different course last week. It was playing much softer then. On Tuesday, it was firm and fast and that gave much of the field fits.

Howlett, a member at Beach Grove Golf Club in Tsawwassen who just finished high school at South Delta Secondary, had seven birdies on the day. “I drove the ball well today,” he said. “My misses were good and I made a couple of putts. My plan is to hit as many drivers as I can. I want to make a lot of birdies so I can have a chance to win.”

He came to the tournament expecting to play well after a couple of solid finishes at recent junior events. “I won the first MJT a couple of weeks ago and I came third here, so I have been playing well,” Howlett said.

Four championships are being contested in this 54-hole event. In addition to the B.C. Amateur, champions will be crowned in the Junior Boys (ages 18 and under) , Mid-Amateur (25 and older) and Mid-Master (40 and older) categories.

Swanson, the defending Mid-Amateur champion, was not surprised to see The Bear play tough on Tuesday. “It's one of those courses where you're going to think you are going to rip it up,” Swanson said.

“It’s not that wide open, it’s tight in spots and the greens are firm and fast. It's one of those things where I think guys are going out there thinking 'I'm going to make tons of birdies' and then the next thing you know you are struggling for pars. If you are hitting the ball really well you are going to score pretty well. But if your game is a little loose, you can easily make bogeys.”

Tuesday’s round, played in extreme heat that peaked at about 37 degrees, required plenty of patience. Rounds were long, in excess of six hours for many groups. That is due in part to the fact that many players were waiting to drive some of those shorter par 4s.

Among those one back of Howlett is highly regarded 16-year-old Victoria resident Jeevan Sihota. He last played in the B.C. Amateur three years ago at Morgan Creek in Surrey, when he finished tied for fifth as a 13-year-old.

Sihota said he’s happy to be playing tournament golf again after a COVID-19 induced layoff. “I haven’t played a tournament in six or seven months,” he said. “So I am happy with how I played today after that long of a layoff. It was a grind out there. I made a couple of bad mistakes, but other than that it was solid. I left a couple of putts out there as well.”

Others in that large group at one-under include Cole Wilson of Kelowna, Riley Lai of Vancouver, Justin Towill of Kelowna, Josh Miller of Victoria, Keenan Flemming of Sechelt, William Bishop of Victoria and James Swan of Esquimalt.

Defending B.C. Amateur champion Jackson Rothwell of Victoria opened with a four-over 76, while defending B.C. Junior Boys champion Brycen Ko of Richmond shot a six-over 78. The 156-player field is adhering to strict COVID-19 protocols. The field is using the first tee only each day.

This year’s tournament, which is normally four rounds, has been shortened to 54 holes. There will be no cut.