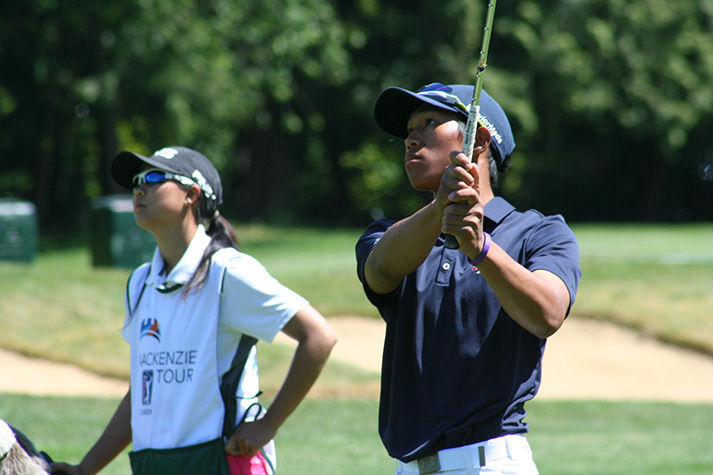 Richmond's Chris Crisologo, Seen Here Playing As An Amateur At Vancouver's Mackenzie Tour Event, Will Now Be In The Field As A Pro At Bear Mountain - image credit Bryan Outram/BC Golf

There will be plenty of British Columbia content at the first two events of the Mackenzie Tour’s Canada Life Series at Bear Mountain next month.

Apart from several sponsor exemptions, the tentative fields have been set for the two 54-hole events at Bear Mountain’s Valley and Mountain courses in the Victoria suburb of Langford.

The final two events will be held in early September at the TPC Toronto at Osprey Valley. Each event offers a $50,000 purse and the top finishers in the series will earn some status on the 2021 Mackenzie Tour.

SUNDAY STRUGGLES: Like much of the rest of the field, Abbotsford’s Adam Hadwin struggled in the final round of the Memorial Tournament at Muirfield Village Golf Club in Dublin, Ohio.
Hadwin closed with a nine-over 81 and finished tied for 54th place at nine-over for the tournament. Nine players shots in the 80s in Sunday’s final round.

Hadwin has made 11 of 12 cuts this season on the PGA TOUR. His only missed cut came at the AT&T Pebble Beach Pro-Am, an event that was won by fellow Abbotsford native Nick Taylor. Hadwin has now made the cut in 120 of the 158 PGA TOUR events he has played in.

Taylor, who missed the cut by two shots at the Memorial, is taking next week off but will remain in the United States and not return to Abbotsford, where he would be forced to self-quarantine.  Taylor plans to play the following week in Memphis and the PGA Championship at Harding Park in San Francisco early August. Fellow British Columbian Roger Sloan of Merritt will play in this week’s 3M Open in Blaine, Minn. Like Taylor, Hadwin is taking the week off.

Svensson remains 37th on the Korn Ferry Tour points list. He cashed a cheque for $2,448 on the weekend and has earned $57,225 in 11 events this year. Svensson will be joined by Vancouver’s Stuart Macdonald in the field for this week’s Price Cutter Championship presented by Dr. Pepper in Springfield, Mo.

Taylor Pendrith of Richmond Hill, Ont., tied for second in San Antonio for this third straight top-three finish on the Korn Ferry Tour.

Neel Soni, another UBC recruit who will be joining the team this fall, won the recent Manitoba Junior Championship. With the uncertainty of NAIA and NCAA competition this fall, expect an announcement soon from UBC coach Chris Macdonald on the creation of a British Columbia Rivalry Series. That series has confirmed dates for events at Shaughnessy Golf & Country Club, Richmond Country Club and Nicklaus North Golf Club.

UBC will also compete in the Canada West Golf Championship, scheduled for Oct. 2-4 at the Okanagan Golf Club in Kelowna.

VIRTUAL BUY-IN: In yet another sign of these COVID-19 times, the PGA of BC has announced that its annual fall Buying Show will be held as a virtual event on its originally scheduled dates of Oct. 14-15. “The PGA of BC Buying Show represents the largest annual gathering of Association Professionals, so it is with disappointment that we announce the Buying Show cannot proceed in its traditional form this year,” said PGA of BC executive director Donald Miyazaki.

“In moving the Buying Show to a virtual format in 2020, the PGA of BC intends to provide the same connections between retailers and exhibitors made at the Buying Show as in past years, even if they cannot be made in person at this time.”