By now, you know that Abbotsford’s Nick Taylor won the 2020 AT&T Pro Am by four strokes over Kevin Streelman as Phil Mickelson folded in the final group and fell to third place. Taylor adds this title to the 2015 Sanderson Farms Championship and with two PGA TOUR titles, he has solidified his place in Canadian golf history.

But let’s go all the way back to the 2009 U.S. Open, where I first met a 21-year-old Taylor who was paired with a recently turned pro Northern Irishman by the name of Rory McIlroy. McIlroy got most of the publicity at first, but Taylor showed his bona fides by not only making the cut, but winning the medal for Low Amateur.

That U.S. Open, played at Bethpage Black, just outside of New York City, was known for terrible rain, mud everywhere and a Monday finish. During Taylor’s opening round, which started at the 10th hole at Bethpage, somewhere adjacent to the New Jersey swamps where Tony Soprano buried lots of bodies, the only three people watching Taylor were myself and his parents Jay and Darlene.

My media access allowed me to walk down the edge of that 10th fairway, but Jay and Darlene had no access through their tickets. After I talked to the marshall telling them who they were, I requested to take them along with me just inside the ropes and taking responsibility for anything that might happen. Well, what happened was a fantastic conversation that showed what loving parents Jay and Darlene were to Nick and their son Josh, who was Nick’s caddy for the week.

Well, on that Monday, after Nick had finished his final round, he had to stay around for the closing ceremony to receive his medal. The family was going in for lunch in player dining when Darlene casually asked if I would like to join them. I said we get fed well in media dining, but she laughed and said I hadn’t seen anything yet. After stowing my media badge for a player dining badge, I joined the Taylors for a fantastic lunch – Darlene was right – and watched in stunned amazement as professionals from Henrik Stenson to Phil Mickelson came over to congratulate Nick and sign the flag Josh had procured.

Even now, I smile when I see Nick’s parents. The future looked so bright that Taylor looked to be on his way to stardom. A stint as World Amateur No. 1, along with a distinguished college career at Washington, did not lead to instant success and Taylor found himself toiling on the Vancouver Golf Tour, run by Commissioner Fraser Mulholland. Success there propelled him to more success on the Canadian Tour, now known as the Mackenzie Tour, before Taylor graduated to the Web.com Tour, now known as the Korn Ferry Tour. 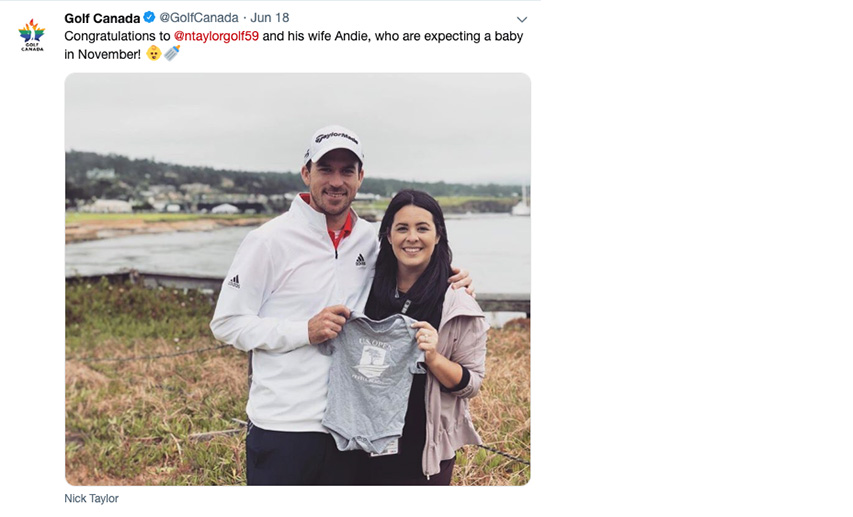 Nick Taylor And His Wife Andie Announced They Were Expecting While At The U.S. Open At Pebble Beach Last June. Now Baby Charlie Is Here And Saw Dad Win At Pebble Beach In The AT&T Pro Am - Golf Canada Twitter Image

In 2014, his only year on the Web.com, Taylor graduated to the PGA TOUR and that September, Mulholland threw a “party” for Taylor and fellow VGT graduate Adam Hadwin at Gleneagles in West Vancouver. I hadn’t seen Taylor in several years, but he sidles up to me and we walk several holes, catching up on life and promising to stay in touch.

Well, things change fast and Taylor wins Sanderson Farms in just his third month on the PGA TOUR and that guaranteed him not just the rest of that season, but two additional seasons on the PGA TOUR. I caught up with Taylor in February 2015, at the Waste Management Phoenix Open. Taylor, now a millionaire, had secured tickets to the Super Bowl across town to see his beloved Seattle Seahawks, complete with chauffeured limousine ride.

When I produced my Super Bowl tickets, won via the NFL Lottery, for me and my nephew Garrett, Taylor had a good laugh and was suitably impressed. In the years since, I’ve followed Taylor as he plays in San Diego, Phoenix and Pebble Beach, and in Phoenix, I’m often accompanied by Taylor’s old roommate, Kevin Stinson, who accompanies me inside the frenetic 16th hole at TPC Scottsdale. “They’ll let anybody in here these days,” Taylor jokes with Stinson, and they laugh together, reminiscing about times not long ago when they barely had two nickels to rub together.

Whenever I see Taylor, he’s the first to greet me by name and I was probably the only person he recognized on Thursday at Pebble Beach when he was summoned to the media centre for a post-round interview after his round of 63 at Monterey Peninsula. Perhaps the best thing about Nick Taylor is he has chosen well in a life partner, because Andie Taylor is one of the nicest people in the world. When I see her following her husband, she is enthusiastic, yet even-keeled and always has a hug at the ready for me and any other acquaintance she meets up with.

It’s also pretty cool when she hands over a homemade peanut butter and jelly sandwich to Taylor’s caddy Jeff Willett, for Nick to have midway through his round. When the couple had their first child Charlie, late in 2019, life changed for both of them. Andie prided herself on missing maybe three of Nick’s holes in 5-plus years on the PGA TOUR, but after Charlie was born, she would miss good parts of any early morning rounds because the PGA TOUR provided daycare doesn’t open until 8 a.m.

And when I asked how her husband was at changing diapers, she said he is very good, probably because she’s had 18 years to train him on being a good husband and father. Andie also joked that she wasn’t a big fan of the replica gold chicken trophy Taylor won as Sanderson Farms champion, but she will probably be quite pleased with the Pebble Beach crystal trophy that will soon adorn their Scottsdale home.

Taylor also keeps all his commitments, even if they could affect his ability to play well. Taylor’s win at Pebble Beach this week included Taylor not getting to the Monterey Peninsula until late Monday night because earlier that evening, he and Adam Hadwin had an RBC sponsor night in Phoenix. Friends of mine were part of that soiree and reported back that Taylor and Hadwin were fantastic hosts, engaging fully with the guests even though the event took away a day of practice at Pebble Beach.

Even better was my friends had met Taylor previously at another RBC event where Taylor and Mike Weir were hosts. Not only did Taylor remember my friends, he remembered that session with Weir. All of this is a long-winded way of saying that now that we know how good a golfer Taylor is, we also know he may be a better person.

So here’s to Taylor enjoying the spoils of his success, which will include his first ever visit to Augusta, Georgia in April to play The Masters. Add in an invite to the Sentry Tournament of Champions in January in Maui and it’s going to be a fun time for Nick, Andie and Charlie Taylor.