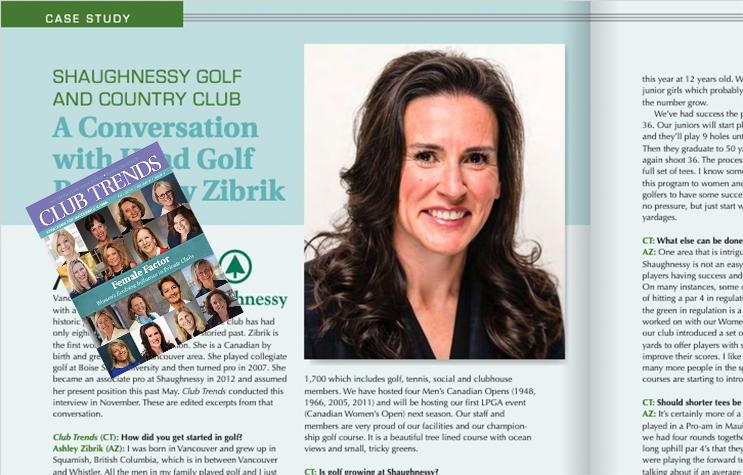 Not only is BC's Ashley Zibrik having a positive impact on the game of golf here at home for golf as a whole and, in many respects, for the advancement of women in the game in particular, her contributions are being duly noted south of the border.

Recently Zibrik, Shaughnessy Golf Club's Head Professional, was interviewed by Club Trends magazine, a publication put out by the National Club Association based in Washington, DC. She was a major component of an issue put out by Club Trends focussing on the impact women are having at private clubs these days.

The issue, Female Factor: Women's Evolving Influence In Private Clubs, was put out for Fall 2019 and among the articles was a feature Q & A with the former Class 'A' Professional of The Year and two-time PGA of BC Women's Champion, Ashley Zibrik.

Following is an excerpt from the article.

Ashley Zibrik is the head pro at Shaughnessy Golf and Country Club in Vancouver. It is a premier club with a big membership and a historic golf tradition. Established in 1911, the club has had only eight head professionals during its storied past. Zibrik is the first women to hold that position. She is a Canadian by birth and grew up in the Vancouver area.

She played collegiate golf at Boise State University and then turned pro in 2007. She became an associate pro at Shaughnessy in 2012 and assumed her present position this past May. Club Trends conducted this interview in November. These are edited excerpts from that conversation.

Club Trends (CT): How did you get started in golf?

Ashley Zibrik (AZ): I was born in Vancouver and grew up in Squamish, British Columbia, which is in between Vancouver and Whistler. All the men in my family played golf and I just loved playing sports. I started playing junior golf at 12 years old. Having a competitive nature, the more I improved, the more I fell in love with the game.

Click HERE to see the interview done by Brad Ziemer for British Columbia Golf with Ashley and her husband, fellow BC Golf Professional, Dave Zibrik, from Point Grey G&CC.