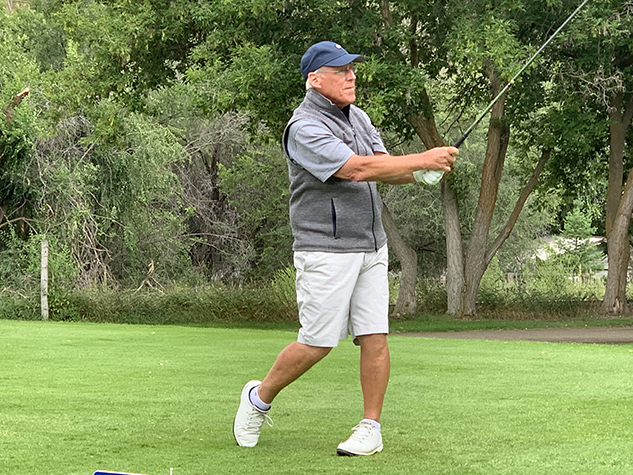 VERNON -- Doug Roxburgh has a battle on his hands at the B.C. Senior Men’s Championship and he’s okay with that.

The 67-year-old Roxburgh will carry a slim two-shot lead into Thursday’s final round of the 54-hole championship at Vernon Golf & Country Club after his one-under 71 Wednesday left him at five-under for the tournament.

Roxburgh will play Thursday with Shaw and Harper in what should be a comfortable group for all three players. The 13-time B.C. Amateur champion and Harper go way back and Shaw was paired the first two rounds this week with Roxburgh and has played with Harper in the past.

Roxburgh is seeking his third straight B.C. Senior title and fifth overall. He won last year’s championship at Big Sky Golf Club in Pemberton by 10 shots and was able to cruise to his victory. Asked if he liked the fact that things are tighter this year, Roxburgh smiled and said: “Oh yeah, sure. I just like playing golf. It's going to be fun. The weather is supposed to be good and I will be playing with Sandy and Jim. We've played a lot of golf together.”

After opening with a four-under 68 on Tuesday, the birdies were tougher to come by for Roxburgh on Wednesday. He made just two of them and missed some decent looks on his back nine. “Today I was between yardages a bit and it was a little breezy and we had tighter pins and things like that,” he said. “I didn’t start that well, but I was happy with the way it turned out.”

So was Shaw, a 60-year-old who returned to competitive golf after a long layoff when he became senior-eligible at age 55. He finished third in his B.C. Senior debut in 2014 at Christina Lake. “I was tied with Doug going into 17 in my first B.C. Seniors and I bogeyed 17 and 18 and finished three-under,” Shaw said. “Doug was five, Lance Lundy was four. It was fun.”

Shaw expects Thursday to be fun as well and said he doesn’t expect to be nervous. “Nope, not playing with Doug and Sandy,” Shaw said. “They are gentlemen. We are all out here to play well and try to win the tournament. They are both premier golfers. What an experience for me.” 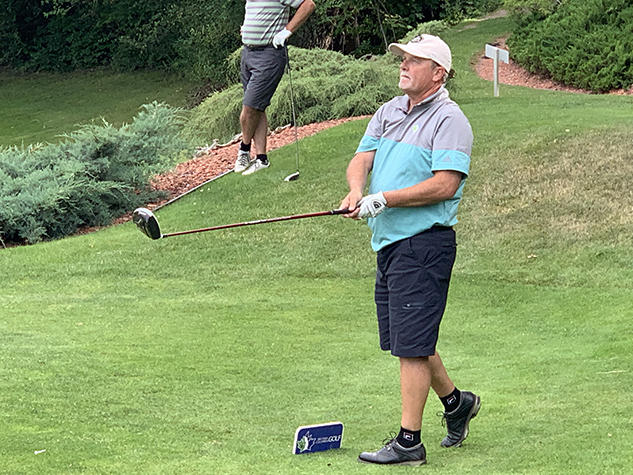 Jim Shaw Is Roxburgh's Closest Pursuer And Will Be Looking To Win His First B.C. Senior Championship

Harper, the 2012 B.C. Senior Men’s champion, had the day’s best round. He shot a three-under 69, but was lamenting late bogeys on the 16th and 18th holes. Those bogeys came after Harper and playing partner Ray Henry of Victoria recorded a double-eagle of sorts on Vernon’s par 4 12th hole.

“It was the coolest thing,” Harper said. “Ray hit (a wedge) first and we watched it roll just like a putt into the hole. Then I hit a 70-yard sand wedge, it landed in the middle of the green and rolled into the cup on top of his. I have never seen anything like it from that sort of distance.”

Harper, a past B.C. Amateur champion, was happy to shoot himself into contention Wednesday and joked that he has a good feeling about Thursday’s final round. “I had a fortune cookie that said ‘you will do good things’ or something like that,” he said with a chuckle. “Who knows what will happen.” The wildcard in Thursday’s final round just might be O’leary, who is a senior rookie. The 55-year-old City of Victoria employee is a 13-time club champion at Royal Colwood Golf Club and hits the ball a mile.

He shot an even-par 72 Wednesday, but had it three-under for the day and five-under overall late in his round. “I was two-under on the front and then made another birdie, but I bogeyed three of my last six holes,” O’leary said.

The top three B.C. finishers after Thursday’s final round of the 54-hole event will represent the province in an inter-provincial team competition at the Canadian Senior Men’s Championship, which goes Sept. 10-13 in Scarborough, Ont. Roxburgh leads the Super-Senior Championship for players 65 and over by six shots over Brian Wadsworth of Vernon and William MacPherson of Victoria.

The tournament also includes a two-man best-ball competition. Shaw and Greg Bismeyer of Mission lead at 10-under, one shot better than the team of O’leary and John Ainsworth of Victoria. A 36-hole zone championship concluded Wednesday with the Zone 5 (southern Vancouver Island) team of Shaw, O’leary, Henry and Timothy Howard of Victoria winning with a score of eight-over par.