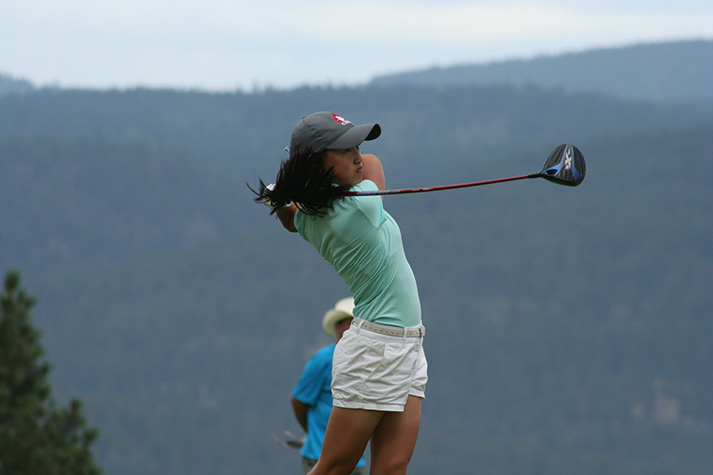 If Alisha Lau and Phoebe Yue thought they were going to turn the B.C. Women’s Amateur Championship into a two-player race, they learned Thursday that Angel Lin had other plans.

Lin, a 16-year-old from Surrey, moved into contention with a tournament-low four-under 68 in Thursday’s third round that left her just one back of Lau and Yue. Lin made six birdies in her trip around Nanaimo Golf Club. She got her round started with birdies on the first two holes and finished nicely by birdieing two of her final three holes.

“The first two definitely gave me some momentum,” Lin said. “On the first hole I hit it to about three feet and on the second hole I think I had about a four-and-a-half footer. So that was a nice way to start.”

Lin, who is heading into Grade 12 at Elgin Park Secondary in south Surrey, stands at two-over par through 54 holes. She began the day six shots back of Yue and Lau and will now enter Friday’s final round just one shot behind the two co-leaders, who are bothpast B.C. Junior Girls champions.

“I am just going to try to keep my foot on the pedal,” said Lin, who has committed to play collegiate golf at Boston College in the fall of 2020. “I just have to stick to what I have learned about the course. And I guess whatever happens, happens. The greens can be tricky here and if the wind comes up conditions can be tough.”

Lau and Yue, who began the day tied for lead, stayed that way after both shot one-over 73s Thursday. Yue had taken the lead when she birdied three of the first five holes on the back nine, but stumbled coming home. She bogeyed both the 17th and 18th holes.

“It was a bit of a roller-coaster today,” said Yue, a 19-year-old West Vancouver native who is heading into her sophomore year at UCLA in Southern California. “I got off to kind of a slow start, kind of got it back together a little bit on the back nine and then couldn’t really finish it off. But that’s golf, right. I think going into tomorrow I just need to be steady. I think I got, not antsy, but frustrated with myself, especially around the greens. I had some three-putts and some lip-outs.” 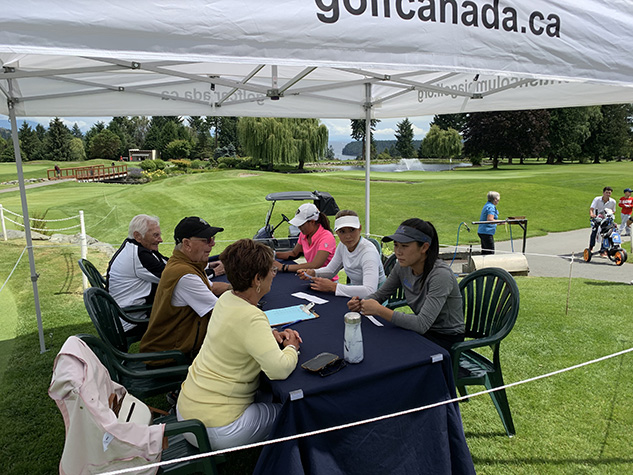 Lau has had at least a share of the lead after all three days. The 20-year-old Richmond resident is playing her first major tournament in more than a year after having wrist surgery last fall. She was a medical redshirt at the University of Colorado last year while she recovered and is trying to get her game and wrist in shape before she begins her sophomore season in the fall.

“It was a little rough, but I made it through,” Lau said of her round. “It was a long round. I kind of got into some trouble on the back nine and was struggling off the tee. It felt like I played a little worse than I did, but I just kept going shot by shot and made a couple of late birdies to help. But still, a little frustrating.”

Leah John of Vancouver is in fourth place at six-over par after shooting a two-over 74 on Thursday. Euna Han of Coquitlam and Amanda Minni of Delta are tied for fifth spot at seven-over. Minni fired a 75 Thursday, while Han had a one-under 71.

The top three players after Friday’s final round will represent British Columbia in an inter-provincial team competition at the Canadian Women’s Amateur Championship, which goes July 23-26 at Red Deer Golf & Country Club in Alberta.

The B.C. Women’s Amateur also includes a two-player best-ball competition. The team of Yue and Mary Parsons of Delta lead after the third round with a score of 12-under par.