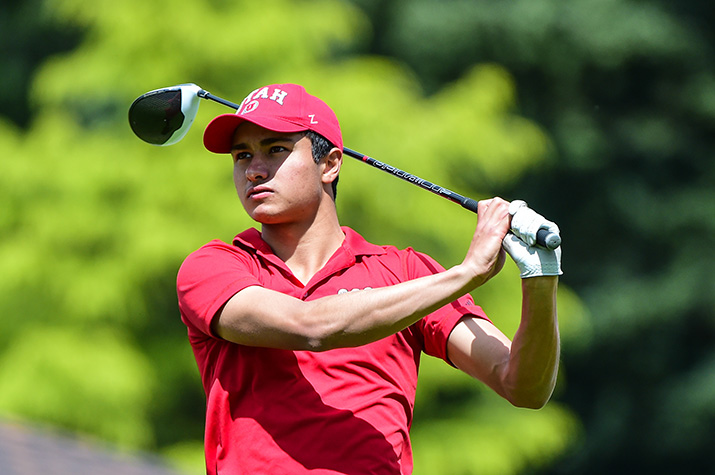 North Cowichan's Tristan Mandur, A Former B.C. Junior Boys Champion, Is Tied For The Lead Heading Into The 3rd Round Of The B.C. Amateur At Big Sky GC - Image Credits Jurgen Kaminski/BC Golf

PEMBERTON -- It didn’t just rain during Wednesday’s second round of the B.C. Amateur Championship at Big Sky Golf Club. At times, it absolutely poured.

It rained so hard that mudslides could be heard thundering down Mount Currie, which towers over the Pemberton layout, and suddenly par became everyone’s best friend. “I made a couple of big numbers coming in,” said first-round leader Jackson Rothwell, who finished his second round in the worst of the weather.

“I don’t want to blame it all on the rain, but it definitely didn’t make it easy. Your grips get wet, even just standing there in the rain it is tough to keep your concentration. You are trying to keep everything dry. Everybody has got to play in it, but it’s tough to keep focused.”

Some played in it longer than others, but there’s no doubt all that rain resulted in some higher scores and tightened up the leaderboard. At the end of the day, Rothwell, an 18-year-old from Victoria who just graduated from St. Michael’s University school, had a share of halfway lead at five-under par with Tristan Mandur of North Cowichan and Isaac Lee of Pitt Meadows.

At one point early on the back nine, Rothwell was two-under for the day and nine-under overall. But disaster struck on the par 4 14th hole, where he made a triple- bogey. “I made two loose swings on the 14th hole and I had a couple of missed putts coming down the stretch that just cost me,” he said.

Rothwell double-bogeyed the par 3 17th, rebounded with a birdie on 18 and ended up shooting a two-over 74. Mandur also played in the worst of the weather and emerged with a two-under 70 that likely felt a lot better than that. “The back nine was definitely more of a grind than the front considering all the rain,” said Mandur. “I am pretty happy with the way I finished.”

Mandur, the 2016 B.C. Junior Boys champion, had four birdies and two bogeys in his round. “Two of my birdies were close and two were about 12 or 15 feet,” he said. Mandur, who plays out of Arbutus Ridge Golf Course, just finished his sophomore year at the University of Utah. “It was really solid,” he said. “We finished fifth at the Pac-12s which is the best we have ever done. It was a cool way to finish the sophomore year.”

Lee, who is heading into his second year at Simon Fraser University, drew an earlier tee time Wednesday and missed the heavy rain. He shot an even-par 72 and had no idea at the time he’d have a share of the lead when the day was done. “I’m just a little disappointed,” Lee said. “I missed a lot of chances out there, especially on the back nine. It was just one those days where the putts weren’t dropping.” 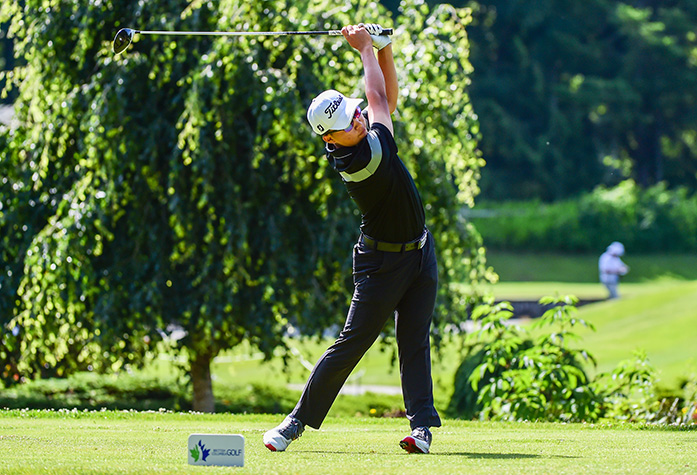 Isaac Lee Is One Of Three Atop The Leaderboard At Big Sky GC With Two Rounds To Go In The B.C. Amateur

Three players, Tony Gil of Reno, Ont., Tyler Saunders of Sturgeon County, Alta., and Roy Kang of North Vancouver, are just one shot back at four-under par. Gil shot a two-under 70, while Kang and Saunders both fired 71s.

The field was cut to the low 70 and ties after Wednesday’s second round. The cut fell at eight-over par and 13-time winner Doug Roxburgh of Vancouver survived to play the final two rounds. It was Roxburgh’s 51st cut made in 53 B.C. Amateur appearances. “It was a grind out there,” said Roxburgh, who fired his second straight 76 to sit at eight-over par. “I started with a sloppy double on the first hole.”

Roxburgh initially didn’t think he was going to make the cut. “I was making alternate plans,” he said. “We were going to go on the jet boats tomorrow.”

The top three players after Friday’s final round will represent British Columbia in the inter-provincial Willingdon Cup team competition at the Canadian Men’s Amateur Championship, which goes Aug. 5-8 at Glen Arbour Golf Course & The Links at Brunello in Hammonds Plains, N.S.

The B.C. Amateur also includes a two-man best-ball competition. The team of Wyatt Brook of Williams Lake and partner Alexander Webber of Saanich lead at 14-under. That’s one shot better than Kang and partner Hyunkook Jung of Richmond.

The 36-hole Zone competition was won by Zone 5, which represents southern Vancouver Island. The Zone 5 team of Mandur, Rothwell, Alex Cordero and William Bishop, finished at 10-under. That was good for a four-shot win.