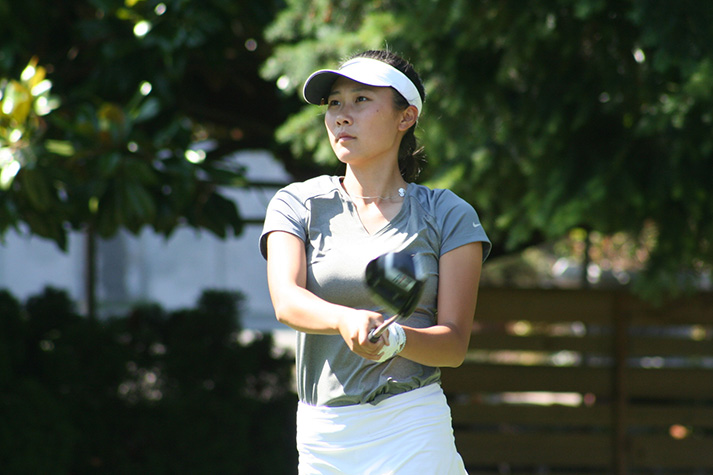 West Vancouver's Phoebe Yue Had The Day's Low Round Moving Her Into A Tie For The Lead At The B.C. Women's Amateur At Nanaimo GC After Round Two - Image Credit Bryan Outram/BC Golf

They have each won a B.C. Junior Girls Championship and now Alisha Lau and Phoebe Yue have an opportunity to add a B.C. Women’s Amateur Championship to their trophy collection.

The two good friends are tied for the lead at the halfway mark of the Women’s Amateur at Nanaimo Golf Club. They stand at even par through 36 holes and are four shots ahead of the rest of the field. Yue, a 19-year-old West Vancouver resident who just completed her freshman year at UCLA in Southern California, had the day’s best round. She fired a one-under 71 on Wednesday.

“I am pretty pleased with the round,” Yue said. “I had a couple of birdie putts from inside 10 feet that didn’t go in. Those hurt a little bit, but I am happy with how I played. There were some little mistakes here and there and I could have made some more putts, but I am feeling good.”

Lau, a 20-year-old from Richmond, fired a two-over 74 after bogeying her final two holes. “I kind of hit a bad tee shot on the par 3 (No. 17),” Lau said. “I was in the bunker and didn’t hit a great bunker shot, so I wasn’t too upset making bogey there. On 18, I hit a not very good tee shot, punched out and then I hit a pretty good wedge and I just missed the putt.

“I am not feeling too bad. I slipped up a bit the last couple holes. I am a little annoyed at myself, but I am just trying to go shot by shot. I played pretty well today, considering the rain.”

Lau is playing her first major tournament in the last year as she begins a comeback after right wrist surgery last fall. She is trying to get her game in shape and test her wrist as she prepares for what will be her sophomore year at the University of Colorado. “It's feeling okay,” Lau said of her wrist. “With the weather and it being a little damp, it was a little sore this morning.”

Lau won the 2017 B.C. Junior Girls title at the Okanagan Golf Club’s Bear Course. Yue won the title last summer at Kimberley Golf Club. Both would love to add a B.C. Women's Amateur title, but are trying not to think about that right now. “I don’t want to think too much about it,” Yue said. “I just want to go out and play golf. I am super excited to play with Alisha. We are really good friends. We hang out outside of tournaments as well. It’s always fun playing with people I am close with.”

Yue called her first year at UCLA something of an eye-opening experience. She played quite a bit, but quickly realized she had deficiencies in her game. “I realized the weaknesses of my game even more compared to junior golf,” she said. “In Canada I would say I was a pretty long hitter in junior golf. And then I got to school and people were just bombing it by me. That was definitely something I had to get used to and I realized I had to get stronger and get better.”

Vancouver’s Leah John and Amanda Minni of South Delta are tied for third spot at four-over par. Minni fired an even-par 72 Wednesday, while John shot a 75. Angel Lin of Surrey is alone in fifth place at six-over.
Defending champion Mary Parsons of Delta is tied for 17th place at 14-over par. The field was cut to the top 25 and ties after Wednesday’s round. The cut fell at 16-over par.

The top three players after Friday’s final round will represent British Columbia in an inter-provincial team competition at the Canadian Women’s Amateur Championship, which goes July 23-26 at Red Deer Golf & Country Club in Alberta.

The B.C. Women’s Amateur also includes a two-player best-ball competition. The team of Yue and Parsons lead after the second round with a score of seven-under par. A 36-hole Zone championship was won by Zone 4, representing Delta, Greater Vancouver, Squamish and the Sunshine Coast. The Zone 4 team of John and Ling Yu (Katherine) Hao finished with a team score of 17-over par. That beat the rest of the field by 19 shots.