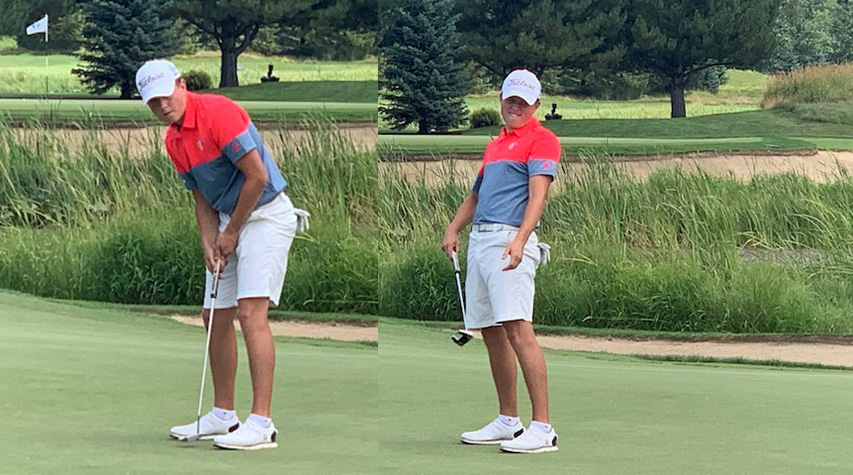 First Round Leader At The B.C. Amateur Championship At Big Sky In Pemberton, Jackson Rothwell, Grimaces As His Eagle Putt Just Misses On The 18th. The Putt Would Have Given Him A 64 On The Day - Images Credit Brad Ziemer/BC Golf

PEMBERTON -- The tournament round of Jackson Rothwell’s young golfing life has given him the first-round lead at the 117th B.C. Amateur Championship. On a hot, muggy day, the 18-year-old Victoria native scorched Big Sky Golf Club with a seven-under 65. "That’s my best tournament score -- so far,” Rothwell said with a smile after his round. “We’ll see if we can go lower tomorrow.”

Rothwell, who finished third at last week’s B.C. Junior Boys Championship at Fairwinds Golf Club in Nanoose Bay, had eight birdies and just one bogey in his round. He has a two-shot lead on Isaac Lee of Pitt Meadows.

“The course really suits my eye off the tee,” said Rothwell, who plays out of Victoria Golf Club. “I had a couple of loose swings to start, but got it going with a really long putt on No. 3. From there, the putter was hot and I didn’t make any big mistakes, so I put a real good score together.”

Rothwell just graduated from St. Michael’s University School and is off to Babson College in Boston to play collegiate golf this fall. He came to Big Sky feeling good about his game. He played solid the last two days of the Junior Boys tourney, where he won a playoff to claim the third and final spot on the B.C. team heading to next month’s Canadian Junior Boys Championship in New Brunswick. “I played well the last two days at the Junior, kind of found my swing,” he said. “I put a new putter in the bag and have been putting well ever since.”

Rothwell almost posted a 64. He hit the par 5 18th green in two and just missed a 10-foot putt for eagle. He hopes he can keep things rolling on Wednesday, when competitors are expected to face rainy conditions. “It will be the same game plan,” Rothwell said. “Hitting to the middle of a lot of the greens is key here. A couple are kind of turtleback shape. . .I think I hit 16 greens today just playing to the middle.”

The 19-year-old Lee seemed disappointed when he was informed in the scoring tent that he did not have the low score of the day. Still, he was happy with his five-under 67. “I went bogey-free and those rounds are not easy to come by,” Lee said. “I thought maybe I had the lead after the first day. I like the course. It’s really similar to my home course which is Swaneset.”

Lee is heading into his second year at Simon Fraser University and said he learned a lot during his freshman year under coach Matt Steinbach. “My team is good and it was really good for me. I learned a lot about how to manage my score, how to keep it low, how to keep a good attitude and all that.” Lee’s round included an eagle on the par 5 13th hole. “I hit a driver down the middle, then hit a 4-iron from about 215 yards and put it to about 15 feet and made the putt from there.”

Ewart, who has had second-place finishes in both the B.C. Amateur and B.C. Junior Boys, is heading to Barry University in Florida this fall. That is the same school Surrey’s Adam Svensson, who is now on the PGA TOUR, attended. “Hopefully I can follow in his footsteps,” Ewart said. “That is going to be pretty hard to do, but that’s the goal. It’s a good opportunity I have down there and I am looking to make the most of it.” 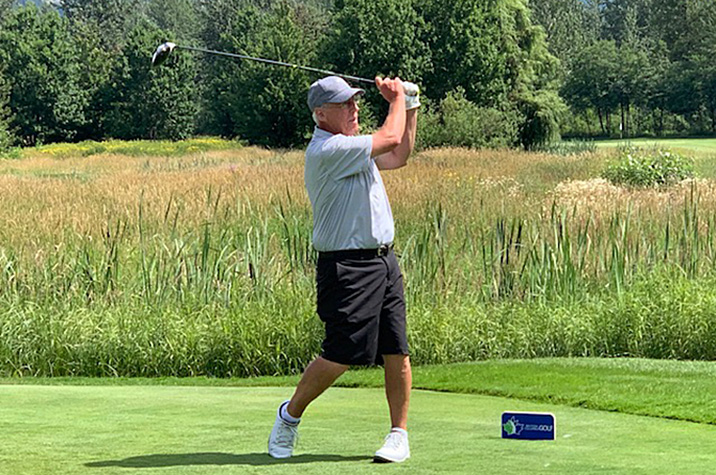 Doug Roxburgh, the 13-time winner who is playing in his 53rd B.C. Amateur, opened with a four-over 76. The 68-year-old Roxburgh has only missed two cuts at the B.C. Amateur and knows he may need to be better Wednesday to play all four rounds this week. “The course is good,” said Roxburgh. “It was nothing to do with the course. You can’t hit any loose shots here. I am just not playing very well and that makes it tougher. You have to grind and work at it.”

The field will be cut to the low 70 and ties following Wednesday’s second round. The top three players after Friday’s final round will represent British Columbia in the inter-provincial Willingdon Cup team competition at the Canadian Men’s Amateur Championship, which goes Aug. 5-8 at Glen Arbour Golf Course & The Links at Brunello in Hammonds Plains, N.S.

The B.C. Amateur also includes a two-man best-ball competition. Three teams -- Rothwell and partner Thomas Horan of Victoria, Ewart and partner Tony Gil of Reno, Ont., and Brook and partner Alexander Webber of Saanich -- are tied for the lead at eight-under.