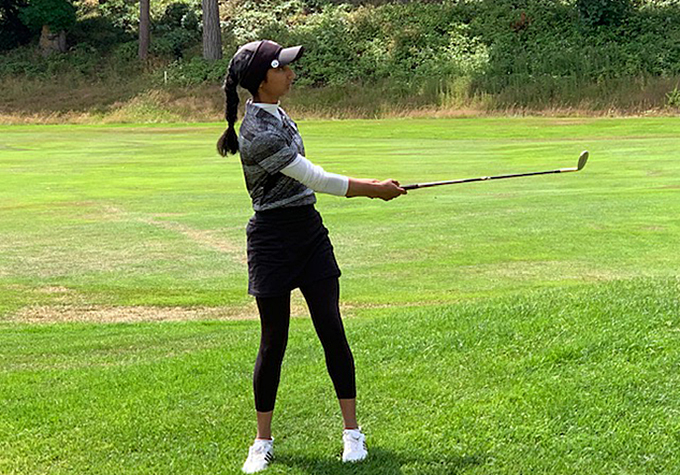 “I feel like I am in a perfect position,” Arora said after Wednesday’s round. “I am feeling confident. There is a lot of golf left and I feel pretty good about my game.”

Although she shot an identical score to her opening round on Tuesday, Arora said they felt much different. “Yesterday I started off pretty rough, but had a solid back nine. Today, I was just up and down. Lots of birdies and lots of bogeys. But I have a good feeling about tomorrow.”

Koira, a 16-year-old who just completed Grade 11, shot a three-over 74 on Wednesday and leads at five-over par through 36 holes.  She wasn’t upset with her score, but wasn’t happy about the finish to her round. Koira was two-under par for her round through 12 holes, but faltered down the stretch when she hit some wayward iron shots.

She played her final six holes in five-over par. “I think I just got a little tired,” said the soft-spoken Koira, who won the Zone 5 Junior Championship last month. “I hope I can play better tomorrow, maybe something under par.” Koira, who plays out of both Victoria and Gorge Vale golf clubs, was 19th at last year’s B.C. Junior Girls Championship in Kimberley. “Overall, I think I have improved everything in my game in the past year,” she said.

Koira is becoming something of a hot commodity in the junior golf world in that she has demonstrated that she has a solid game, but has not committed to a college program. “I want to play college golf, but I may take a year off school after high school to work on my game,” she said.

Arora, meanwhile, is still too young to be recruited by college coaches. “They are not allowed to talk to me, but I have been sent questionnaires,” said Arora, who tied for 8th in her B.C. Junior Girls Championship debut last summer.

Katherine Hao of Burnaby is alone in third place at 11-over par. Vancouver’s Angela Zhang, who had a share of the first-round lead, struggled to an 81 Wednesday and is alone in fourth at 12-over. Nineteen players survived the 36-hole cut, which fell at 25-over par.

The top three players after Friday’s final round will represent British Columbia in the team competition at the Canadian Junior Girls Championship, which goes July 30-Aug. 2 in Lethbridge, Alta.
A two-person best-ball competition is being held in conjunction with the B.C. Junior Championship. Arora and Zhang have the lead at three-under par, two shots better than the team of CoCo Pei of Surrey and Kaitlyn Hill of Whistler.

A 36-hole zone championship was also contested. Zone 4, representing Delta, Greater Vancouver, Squamish and the Sunshine Coast -- won with a total of 30-over par. That was seven shots better than runner-up Zone 5 from southern Vancouver Island.