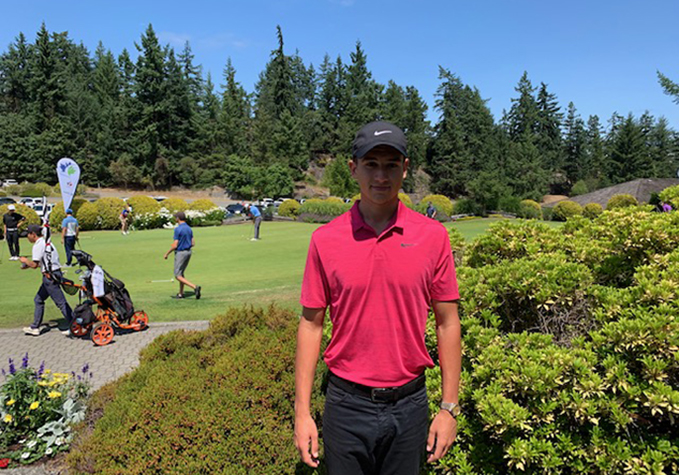 NANOOSE BAY -- Don’t judge a book by its cover and, as competitors at the B.C. Junior Boys Championship are learning, don’t judge a golf course by its scorecard. Fairwinds Golf Club, all 6,200 yards of it, proved to be a stiff challenge for the boys in Tuesday’s opening round of the event.

When the day was done, only one player -- Jackson Jacob of Fort Langley -- was under par.  Fairwinds’ deceptively challenging layout inflicted many casualties among the 114 boys who teed it up. There were lots of 8s and 9s and even some 10s, 11s and at least one 12 recorded.

“You have to stay patient,” Jacob said after his one-under 70. “That was the key for me. I tried to stay patient on every hole.” Staying patient, in large part, meant leaving the driver in the bag.

“It takes driver out of your hands of the longer hitters for the most part,” Jacob said. “I hit two drivers all day and I think that is the same for the majority of the field.” Jacob, who just graduated from Walnut Grove Secondary in Langley, is playing in his third and final B.C. Junior. He’d obviously like to end his junior career on a high.

“I came 10th last year in Kamloops,” he said. “That was a good finish for me. I didn’t play my best rounds any of the four days but I was pretty consistent. I feel pretty confident about my game right now. I have had a good spring so far.”

Jacob had never laid eyes on Fairwinds before playing two practice rounds earlier this week. He said he learned quickly that he must play conservatively, especially off the tees. “I did a pretty good job of following my game plan today.

Not everything went as I wanted it to, but it never will. I did a pretty good job of staying out of trouble and just making my way through the day. There were no big numbers. I was never in bad position, I just made a couple of silly mistakes. That is going to happen.”

Jacob had three bogeys and four birdies in his round. He has a two-shot lead on Dustin Franko of Delta. Jacob plays out of The Lab at Northview in Surrey, where he is coached by John Shin. His coach shot a 61 on the weekend and won the Vancouver Golf Tour’s Ledgeview Open in Abbotsford. “I'm just trying to keep up,” joked Jacob, who will be playing collegiate golf at the University of Idaho this fall.

Franko also avoided big numbers en route to his one-over 72. “I left a couple of shots out there, but I have to be happy with what I posted,” he said. “No big numbers. There is quite a lot of out-of-bounds out there and definitely lots of hazards. I managed to keep the same ball I started with.”

The 18-year-old Franko plays out of Westwood Plateau in Coquitlam and just completed his first year playing for Douglas College. Defending champion Ilirian Zalli of Burnaby opened with a four-over 75. Michael Crisologo of Richmond, the runner-up last year, shot a two-over 73.

“It kind of handcuffs me,” Crisologo said of Fairwinds. “I think most of the field here is just hitting irons off the tees. We are playing basically from the same spot. So it’s really about if you can keep it in front of you and make some putts. I grinded it out. It is a little bit different than many courses where the long ball is favoured a bit. But you have to adjust and see where it goes from there.”

The tournament also includes a two-man best-ball competition. The Kelowna team of Matt Hopley and Justin Towill grabbed the first-round lead with a seven-under 64. The team of Crisologo and Dylan Bercan of Vancouver are two shots back in second place. The field will be cut to the low 55 and ties after Wednesday’s second round.