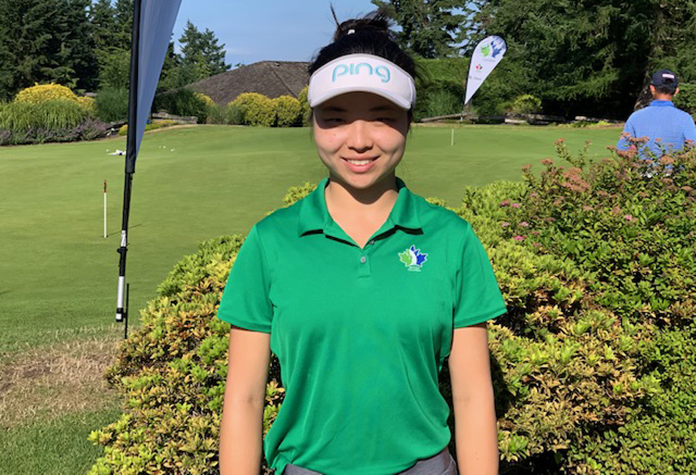 NANOOSE BAY -- Angela Zhang has come up with a simple game plan for how to play Fairwinds Golf Club at this week’s B.C. Junior Girls Championship. “Stay patient,” Zhang said. “Don’t let the course beat you up. You just have to stay patient and let the putter do the talking.”

Unfortunately, Zhang’s putter didn’t do as much talking as she would have liked in Tuesday’s first round of the 72-hole event. The 17-year-old Vancouver resident only managed one birdie despite hitting 17 greens in regulation. Still, she salvaged a two-over 73 that gave her share of the lead with Victoria’s Cindy Koira.

“You know what, I played really smart and I am proud of myself for being really patient on the course. I put myself in good locations, had good putts, just none of them dropped really,” Zhang said. “Hopefully, tomorrow all of that changes and I will keep the patience up and more putts will drop.”

There seems to be trouble everywhere at Fairwinds, where white and red stakes seem to line nearly every hole. “This course, it’s super narrow,’ Zhang said. “You’ve just got to keep it in play. There are some holes here where bogey would be a good score. I think the key is put it in play and sometimes if you get out with a bogey you are happy.” 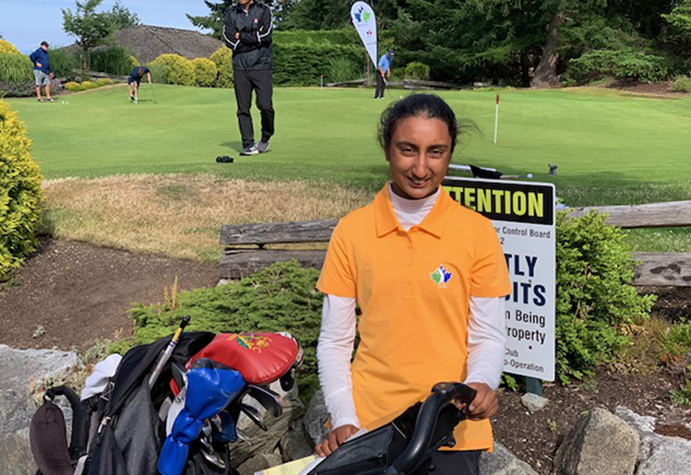 Koira did a great job of putting the ball in play. “I think I hit all 18 fairways today,” the 16-year-old said after her round. She didn’t just drive the ball well. Koira was also happy with the way she rolled the ball on the greens at Fairwinds. “It is a really challenging course,” said Koira, who just completed Grade 11 at Stelly’s Secondary in Saanichton.

“There are a lot of hazards and out-of-bounds and the fairways are pretty narrow. And the greens are also quite narrow with not a lot of depth, so that makes your approach shots challenging. My putting was really good today and I was solid off the tee.” Koira had two birdies and four bogeys in her round.

She and Zhang have a two-shot lead on Surrey’s Angela Arora heading into Wednesday’s second round. The course was set up at about 5,700 yards for the 33 girls competing this week. Zhang, who is heading to Dartmouth College in New Hampshire this fall to play collegiate golf, said it plays much longer than the yardage would indicate.

“Yardage-wise it sounds really short, but for me as a really long hitter there are some holes where it is challenging to even get on in regulation. So even though the yardage seems short, a lot of the holes play a lot longer because of the narrowness of them. You can’t hit driver off some of those holes.”

A two-person best-ball competition is being held in conjunction with the tournament. Arora and Zhang share the lead at one-under with the team of Natasha Kozlowski of Prince George and Sherri Yang of Richmond.

At the conclusion of round two the field will be cut to the low 18 and ties.