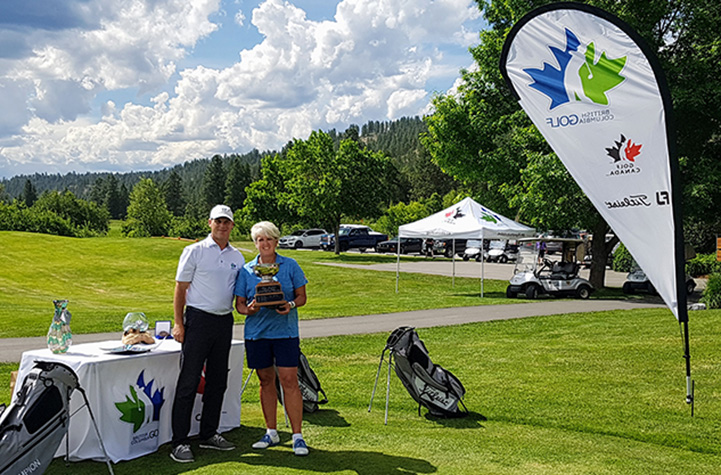 Each morning, Carrington received an email from her mom, Shelley. The one she received before Thursday’s final round read in part: “Enjoy the moment. Play fearlessly. Breathe, inhale confidence. Feel your powers, feel your energy. Trust, commit. Love surrounds you. Play happy.”

“She was my 15th club,” a tearful Carrington said after winning the B.C. Senior title at St. Eugene Golf Resort in Cranbrook.

Carrington decided to play in Cranbrook in part because the East Kootenays is her home turf when it comes to her work as a sales rep for G&G Golf and ACI Brands. “I know all the (B.C.) girls and I love to just support golf and the East Kootenays from Golden to Fernie is part of my territory,” she said.

“And with Cindy Soukoroff here being the Head Professional and being a great ambassador to golf, we talked about me coming over to play. And I thought, you know what, I am going to do it. I had never played St. Eugene before and it was a spectacular property and venue to host this event.”

Carrington shot rounds of 75, 76 and 76. She credited Horwood with forcing her to play well in Thursday’s final round. Carrington tried not to think about her big lead and just concentrated Thursday on finishing strong. “Yes, there was a lead, but for my own peace of mind I just really wanted to play three really great rounds of golf as best as I could,” she said. “I think as we get older we know that in this game anything can happen at any point.”

Carrington now hopes to complete the B.C.-Alberta double. The Alberta Senior women’s tourney is not being played until July 23-25 in Rocky Mountain House. “We haven’t had our provincials yet, so this was the first stop,” Carrington said. “I am appreciative of this event and being able to win. I just really hope I can go back to my own province and play well enough to potentially win the Alberta title and be a representative of Team Alberta.”

Penny Baziuk of North Saanich finished third at 19-over, while Alison Murdoch of Victoria was fourth at 21-over. Baziuk was second in the Super-Senior championship, two shots behind Horwood.
A Stableford competition was contested in three flights during the tournament. Horwood won the A flight with 109 points, five more than Karen Kloske of Lake Cowichan. Xuanli Li of Vancouver captured the B flight with 109 points.

Connie Dykstra of Victoria was three points back. Nina Henriksen and Diana Maughan, both of Vancouver, each finished with 107 points to top the C flight.

This week’s championship also included a two-woman Best-Ball team competition. The Cranbrook team of Kathryn Teneese and Leslie Weaver won with a score of 23-under. Horwood and Maughan finished three shots back in second.

The top three finishers in the B.C. Senior competition -- Horwood, Baziuk and Murdoch -- will represent British Columbia in an inter-provincial team competition at the Canadian Senior Women’s Championship, which goes Aug. 18-20 at Osoyoos Golf Club.