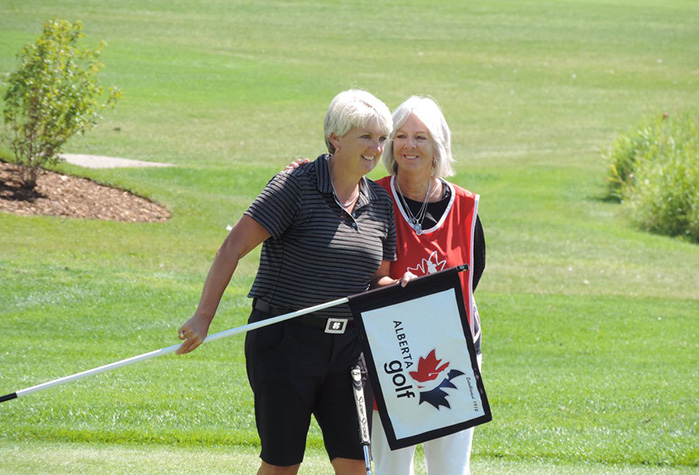 Calgary's Kim Carrington (L) Is No Stranger To Winning Golf Tournaments And She Has The First Round Lead At The B.C. Senior and Super-Senior Women’s Championship - Image Credit Alberta Golf

Albertans always flood the Kootenays during golf season and on Tuesday, three of them settled in at the top of the leaderboard of the B.C. Senior and Super-Senior Women’s Championship at St. Eugene Golf Resort in Cranbrook.

Kim Carrington of Calgary fired a three-over 75 to grab a three-shot lead after the first round of the 54-hole event. Carrington, the 2017 Alberta Senior Women’s champion, had one birdie and four bogeys in her round.

Lynn Kuehn of Lacombe, Alta., who finished second at last year’s B.C. Senior Women’s Championship at Crown Isle Golf Resort in Courtenay, sits in a three-way tie for second after opening with a 78. Another Albertan, Joan Wilson of Calgary, and Colleen Wheatley of Shawnigan Lake also fired 78s on Tuesday.

Holly Horwood of Vancouver, Alison Murdoch of Victoria and Penny Baziuk of North Saanich, are tied for fifth after all shooting 79 on Tuesday.

Defending champion Jackie Little of Procter, who is seeking her seventh B.C. Senior Women’s title, opened with a nine-over 81 and was tied for ninth place. Wilson and Wheatley are tied for the lead in the Super-Senior category for players aged 60 and over. Baziuk and Murdoch are one shot back.

This week’s championship also includes a two-woman best-ball team competition. The Cranbrook team of Kathryn Teneese and Leslie Weaver lead after the first round with a best-ball score of 64.