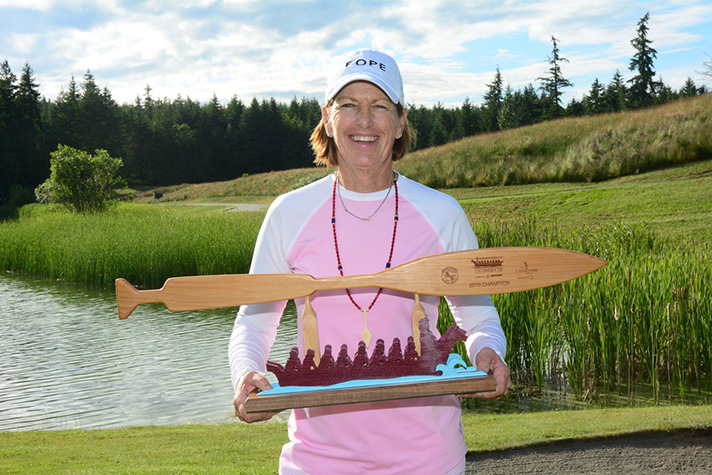 The LPGA and World Golf Hall of Fame member posted a final-round score of 7-under 66 to finish at 15-under 131 at White Horse Golf Club.

Inkster played two bogey-free rounds and added final-round birdies on hole Nos. 16 and 18 to win by four strokes over runner-up Michele Redman of Minnesota. Redman recorded a final-round score of 66 for a two-day total of 11-under 134.

“I felt relaxed and calm and I was in control of my game, which I haven’t felt in a while, so it was a really good feeling,” said Inkster, who earned her fifth victory on The Legends Tour. “But you still have to get the ball in the hole.”

Inkster earned the first of her 31 LPGA Tour victories at the 1983 Safeco Classic in Washington state as an LPGA rookie, so she admittedly looked forward to coming back years later where her storied career began.

Redman didn’t allow Inkster to coast on nostalgia, however. The LPGA player-turned college-coach birdied holes 8, 9 and 10 to move within one shot of Inkster.

The women’s golf coach at the University of Minnesota stayed right on the hall of famer’s heels until Inkster birdied the par-5 14th hole for a two-stroke cushion, later making birdie on two of her last three holes. Meanwhile, Redman’s birdie putts would not drop and she took par on her last eight holes.

“I left some out there today and missed a short birdie chance on No. 17,” said Redman, who has two wins on the LPGA and three Legends Tour wins. “But I felt really good about the way I played today.”

Inkster won $25,000 of the $200,000 purse in the 36-hole tournament, but more importantly to the consummate multi-tasker, she got the chance to compete in her packed schedule that juggles television commentary duties for Fox Sports and 2019 preparation as captain of the U.S. Solheim Cup team for the third time.

“I can’t imagine not playing golf and The Legends Tour gives us a great opportunity to link up again and be competitive,” said Inkster. “Plus, this was a great golf course that was fun to play.”

Great Britain’s Trish Johnson, winner of the 2018 event, tied for third with Oklahoman Moira Dunn-Bohls at 8-under 138.

Oregon’s Lara Tennant was the low amateur in the event, with four amateur invitees in the field including Procter, BC's Jackie Little, Seattle's Leslie Folsom and Anita Wicks of Roseburg, Ore. Tennant tied for 17th at 5-over 151. Little finished T27 (+11) as 2nd low amateur, with Folsom T30 and Wicks 30th.

Two other Canadians were in the field but on the professional side, Vanderhoof, BC-born Gail Graham was T30 and Charlottetown, PEI's Lorie Kane finished solo 22nd.

For results from the Suquamish Clearwater Legends Cup presented by Boeing, visit: http://leaderboard.thelegendstour.com/?TID=82

About The Legends Tour