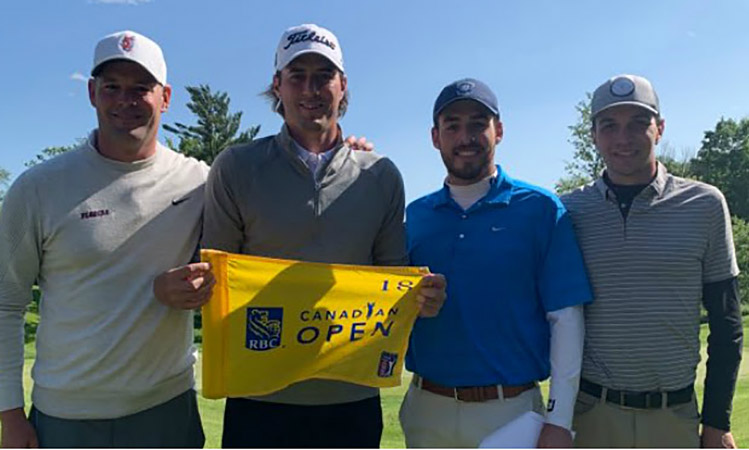 Allenby was the low qualifier by carding a 4 under par 67. Four birdies on the final six holes helped him qualify for his first RBC Canadian Open.

“You just have to keep playing,” said Allenby of his four back nine birdies. “I can’t really tell you what it was. Two 30-footers went in and those are always nice. I’ve been putting well all year, so I’m not surprised, but I’m very happy. My mental game has really taken a step up this year, and that will help me get around [Hamilton Golf & Country Club].”

Allenby earned medallist honours at the B.C. Regional Qualifier at Kings Links in Delta in early May. He plays on the Mackenzie Tour – PGA TOUR Canada and recently finished T2 at the Canada Life Open in Vancouver.

Amateurs DeMarco and Brault finished T2 with a 1 under par 70 and will be competing in their first RBC Canadian Opens. Their addition to the field brings the number of Canadian amateurs teeing off at Hamilton Golf & Country Club to six – Michael Anderson of Mississauga, Ont. qualified through the Quebec Regional Qualifier, while Team Canada National Amateur Squad members Chris Crisologo (Richmond, B.C.), Joey Savoie (La Prairie, Que.) and Josh Whalen (Napanee, Ont.) were granted exemptions.

Toronto native JC Deacon earned the final qualifying spot by shooting an even-par 71. At age 37, he will be competing in his first RBC Canadian Open. Deacon is the head coach of the University of Florida men’s golf team.

With the addition of the four Monday qualifiers, there are now 26 Canadians scheduled to compete as part of the 2019 RBC Canadian Open. They are: