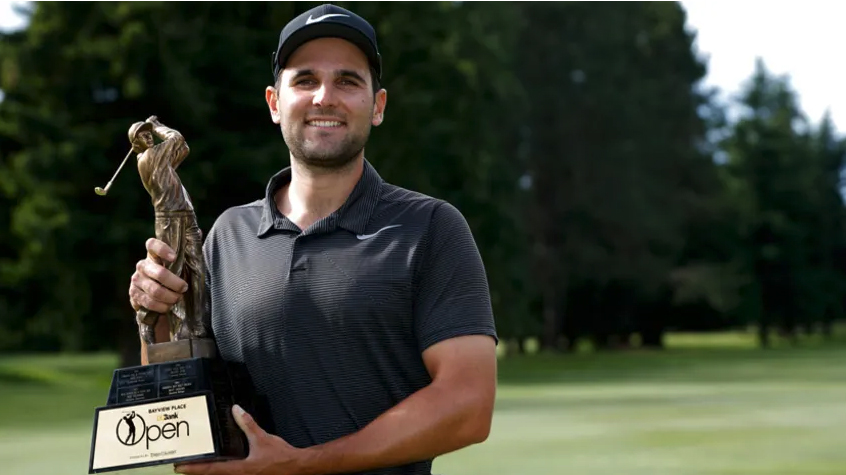 Barjon closed with a five-under 65 at Uplands Golf Club to edge American Doc Redman, the 2017 U.S. Amateur champion, by a single shot. Barjon, who previously won the 2016 Canada Life Championship on the Mackenzie Tour, finished the 72-hole event at 19-under par.

“Everything ended up going my way,” Barjon said. “I just wanted an opportunity to compete on the last day and get a shot at winning. It was a great match with Doc and he made a pretty big charge towards the end, so that got in my head for sure.”

Barjon earned $36,000 for the win and a spot in this week’s RBC Canadian Open. Taylor Pendrith of Richmond Hill, Ont., was the low Canadian. He tied for 10th place at 10-under par. Mike Belle of Burnaby was the top British Columbian. Belle closed with a two-under 68 and finished tied for 23rd place at five-under par. Other British Columbians who played on the weekend included Zach Anderson of Nanaimo (T39), Jim Rutledge of Victoria (T46) and Riley Wheeldon of Comox (T66).

FREE ADMISSION: The Mackenzie Tour takes a one-week break while the RBC Canadian Open is being played this week in its new early June slot. The Mackenzie Tour resumes the following week, June 13-16, for the $200,000 GolfBC Championship at Gallagher’s Canyon Golf & Country in Kelowna, where tournament organizers are offering free admission all week. Fans will have an opportunity at the gate to make a donation to the tournament’s charity, the B.C. Cancer Foundation.

Each year, club professionals at GolfBC facilities compete in a one-day tourney for an exemption into the event. This year’s winner of the competition, held at Mayfair Lakes in Richmond, was Mike Nedoszytko of Nicklaus North. He will tee it up at Gallagher’s Canyon, as will Ethan Danish of Two Eagles Golf Course in Westbank. Danish earned the Interior PGA exemption.

SKIPS SECTIONAL: Abbotsford’s Adam Hadwin skipped a U.S. Open sectional qualifier on Monday to focus all of his attention on this week’s RBC Canadian Open at Hamilton Golf & Country Club. Hadwin, who is coming off a tie for 52nd finish at the Memorial tourney in Dublin, Ohio, on Sunday, has made it clear that trying to win the Canadian Open is of much more importance to him than playing in the U.S. Open. He clearly feels that competing in a 36-hole sectional qualifier on Monday would not be the best preparation for performing well in Hamilton.

RETURN ENGAGEMENT: Richmond amateur Chris Crisologo received a sponsor’s exemption into this week’s RBC Canadian Open. Last year, when the event was held at Glen Abbey, Crisologo made the cut and went on to finish tied for 45th.

WEEKEND OFF: Kelowna’s Megan Osland and Victoria amateur Naomi Ko both missed the cut at the U.S. Women’s Open in Charleston, S.C. Osland, a Symetra Tour regular, came close. She fired rounds of 75 and 72 for a 36-hole total of five-over par. That was just two shots shy of the cutline. Ko, who just completed her collegiate golf career at North Carolina State University, shot rounds of 82 and 76 in what was her second appearance at the U.S. Women’s Open.

NOD TO NORTHVIEW: The Tour LAB @ Northview made it back to back wins at the PGA of BC Tournament of Champions. Head Teaching Professional Matt Palsenbarg and amateur partner Jackson Jacob beat the Victoria Golf Club duo of Head Pro Lindsay Bernakevitch and amateur Craig Doell on the first hole of a sudden-death playoff at Northview Golf & Country Club’s Ridge Course.

Both teams recorded best-ball rounds of 11-under 61. The Capilano Golf & Country Club team of Head Pro Mark Thirtle and amateur Greg Trammell finished third after combining for an eight-under 64.