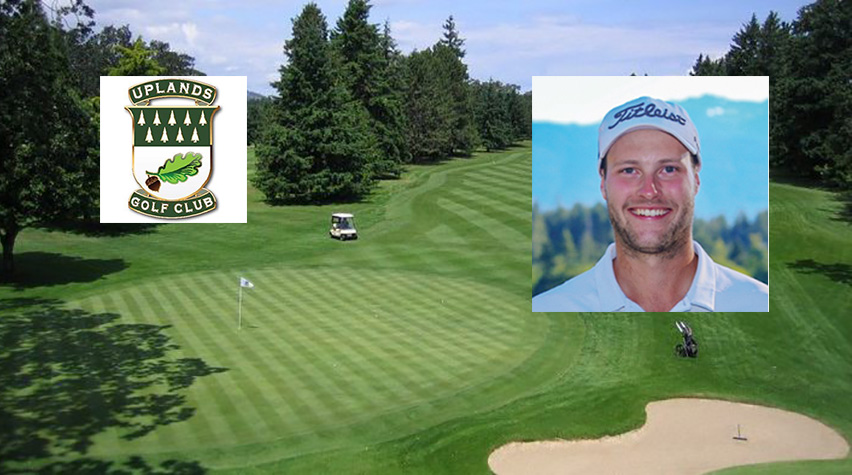 The PGA Tour Canada-Mackenzie Tour circuit moves to Victoria this week for the Bayview Place DCBank Open, where tournament organizers always ensure they have a strong local contingent in the field. Four spots into the $200,000 event are awarded off the 15-event Bayview Performance Tour and this year Cordova Bay Assistant Pro Nate Ollis topped the Order of Merit.

Ollis, a Victoria native who played his collegiate golf at the University of B.C., won three events and ran away with the points list. He feels like his game is in a good place as he prepares to play the Bayview Place tourney at Uplands Golf Club for a second straight year.

Last year, Ollis had to Monday qualify his way into the event and then subsequently missed the cut. “I got in through a playoff which was really, really cool but it was definitely a bit of a whirlwind week for sure, especially with it being my first Mackenzie Tour event,” Ollis said.

“I was paired with Jim Rutledge, so we had quite a crowd following us. It was really cool, but at the same time I was definitely a bit of a fish out of water last year. The experience was amazing. I played quite well in the first round actually, but I got swept up a bit in the second round, so I am looking forward to another crack at it for sure.”

Ollis began working with a new coach -- North Vancouver’s Bryn Parry -- last fall and said Parry has helped his game immensely. “We have talked about so many of the strategy and mental sides of the game and I feel like I know my game, I know myself and I know how to prepare for bigger and bigger events and let my best golf out.

“Physically and mentally, I feel like my game is in a really good spot. Obviously, nothing is guaranteed in golf, nothing will guarantee a result, but I feel like all the pieces are definitely there and I am just looking forward to an opportunity to do it on that stage and just hit some shots and make some birdies.”

The other three spots off the Performance Tour went to Zach Anderson of Nanaimo, Rutledge -- who clinched his spot with a win in the 15th and final event Friday at Cordova Bay -- and Calgary native Evan Holmes.

BIRDS FIFTH: The UBC men finished fifth at last week’s NAIA National Championship tourney in Mesa, Ariz. The Thunderbirds were led by Logan Carver, who shot a five-under 66 in Friday’s final round to tie for the individual lead. Carver lost in a three-man playoff to finish as one of two runners-up. The University of Victoria finished 18th in the 30-team event.

TITLE DEFENCE: The University of the Fraser Valley men’s golf team will defend their title at this week’s Canadian University/College Championships at FireRock Golf Club in Komoka, Ont. The Cascades earned their first national title when they won last year’s event by 17 strokes at Chilliwack Golf Club. They are led by Daniel Campbell, who has earned eight individual titles in his two years at UFV. Campbell won the men’s individual title last year in Chilliwack.

The UBC Women’s Team, fresh off their NAIA National Championship win earlier this month in Oklahoma City, will defend their team title in Komoka. UBC has won the the women’s team event three straight years. UBC’s Avril Li will be on hand to defend her individual title in what will be her final collegiate event.  The UBC men, who have won this event five times, will be looking to bounce back from a sixth-place finish last year.

The University of Victoria has both its men’s and women’s teams entered in the event, while UBC-Okanagan’s Women’s Team is also scheduled to compete. The 72-hole competition runs Tuesday through Friday.

MID-AM TIME: Ledgeview Golf Club in Abbotsford plays host this week to the B.C. Men’s and Women’s Mid-Amateur and Mid-Master Championships. The Mid-Amateur competition is open to players aged 25 and older, while the Mid-Master Division is limited to players 40 and over.

Vancouver’s Jay Snyder and Christina Proteau of Port Alberni are back to defend the Mid-Amateur titles they won last year at Hyde Mountain Golf Course in Sicamous. New champions will be crowned in the Mid-Master competition as last year’s winners, Greg Koster of Courtenay and Jackie Little of Procter, are not scheduled to compete. The 54-hole competition runs Tuesday through Thursday.

OPEN SEASON: Victoria’s Naomi Ko and Megan Osland of Kelowna will provide some British Columbia content at this week’s U.S. Women’s Open at the Country Club of Charleston in South Carolina. Osland, who plays on the Symetra Tour, and Ko, who just completed her collegiate career at North Carolina State University, earned spots in the field at sectional qualifiers. This will be Osland’s first U.S. Women’s Open, while Ko is competing in her second.