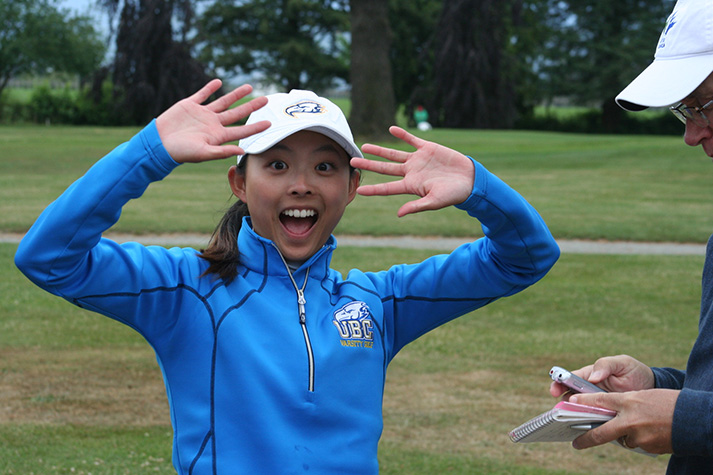 The day did not start quite the way Avril Li or Kate Johnston had hoped, but it sure ended well. Li and Johnston, the No. 1 and 2 players for the UBC Women’s Golf Team, both double-bogeyed the opening hole in Friday’s final round of the NAIA National Championship tourney at Lincoln Park Golf Club in Oklahoma City.

Johnston followed up with a bogey on the second hole and you could almost see UBC’s slim lead slipping away. But UBC’s two top guns recovered beautifully and led the Thunderbirds to a five-shot win over Keiser University of Fort Lauderdale, Fla.

Li, a senior from Port Moody, closed with a three-under 69, while Johnston, a junior from Ayr, Ont., shot an even-par 72. Both players delivered clutch shots down the stretch when their team lead had been cut to just two shots.

Li eagled the par 5 16th hole, draining a wedge from nearly 100 yards, and Johnston closed things out with a chip-in birdie on 18. Key contributions were also made by teammates Esther Lee of Brazil, Shania Remandaban of Coquitlam and Cecile Kwon of Maple Ridge.

UBC recorded its best team score of the year, a three-over 291, in the final round while playing with the pressure of having the lead and in winds that gusted to 40 kilometres an hour. “I am so excited for them,” said UBC coach Chris Macdonald. They have worked hard for this and they earned it.”

This is the fifth national title for the UBC women under Macdonald, who is assisted by Mayfair Lakes teaching pro Keri Moffat. Previous titles were won in 2012, 2010, 2004 and 2001. Macdonald said this one has special meaning as it follows some tough times when the future of the UBC golf program was in real jeopardy. “They are all special, but I think for me, personally, knowing where the program is right now and how it is growing again and what we have been through, it’s probably the most special one,” Macdonald said.

The championship is particularly meaningful for Li, the UBC captain who has just completed her senior year. “I have been waiting for this moment for four years,” Li said. “Every year we have been adding good players to our team. Finally, we were able to put it together.” Li said she felt surprisingly calm all day, even though she knew the Keiser women were nipping at their heels. “I didn’t really feel any pressure at all,” Li said. “I just believed in my team.” 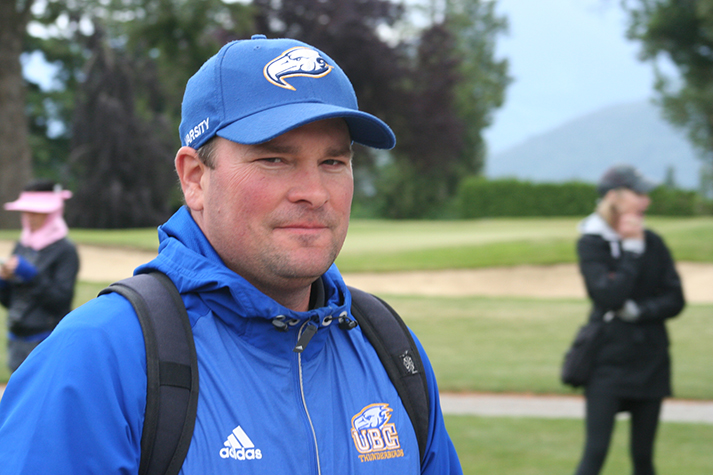 Her eagle on the par 5 16th hole flew right into the cup. “I had the same shot on that hole for four days. Today I was just saying, okay just do exactly what you did the previous three days, because I had hit it pretty close on all three days. Then it went in. It was about 100 yards up the hill. It was pretty much a blind shot, so I didn’t really see it go in. That’s when I thought today might be our day.”

Johnston acknowledged battling some early nerves. “I think definitely knowing we were ahead and wanting to bring it home got the nerves going early for everyone,” Johnston said. “I think the biggest thing was everyone kind of settled in mid-round and started grinding it out and we were able to bring it in with our team-low for the year. It was a solid day of golf in really tough conditions.”

After her shaky start, Johnston birdied the fifth and seventh holes and made the turn at two-over par. She added three birdies on the back nine, including that chip-in on 18 in front of her teammates. “I was told in the fairway on 18 that I just needed a two-putt par,” Johnston said. “I knew we were tight coming in. The girl from Keiser I was playing with (Michela Tjan) was playing unbelievable golf. To chip it in in front of the team and in front of the crowd was really special. I will always remember that shot.”

The win at nationals caps what was already quite a special year for the UBC women. The Thunderbirds won eight tournaments before heading to nationals. “It is crazy,” Johnston said. “It has been the same group of five girls all season just playing hard for each other. Coming into the week I was really, really excited. I thought we had a really good chance. I am at a loss for words. It is such a special thing to win a national championship, especially with this group of girls. I think it is testament to all the hard work we put in.”

Li finished the 72-hole event in second place at one-under par, three shots behind individual winner Tjan. Johnston was third at even-par. Lee tied for 18th at eight-over, Remandaban was 45th at 16-over and Kwon tied for 84th at 32-over.

The University of Victoria, which also qualified for the national tourney, shot rounds of 316 and 314 and failed to make the cut for the final two rounds.

The Thunderbirds complete their season later this month when they defend their title at the Canadian University/College Championship, which goes May 28-31 at FireRock Golf Club in Komoka, Ont.