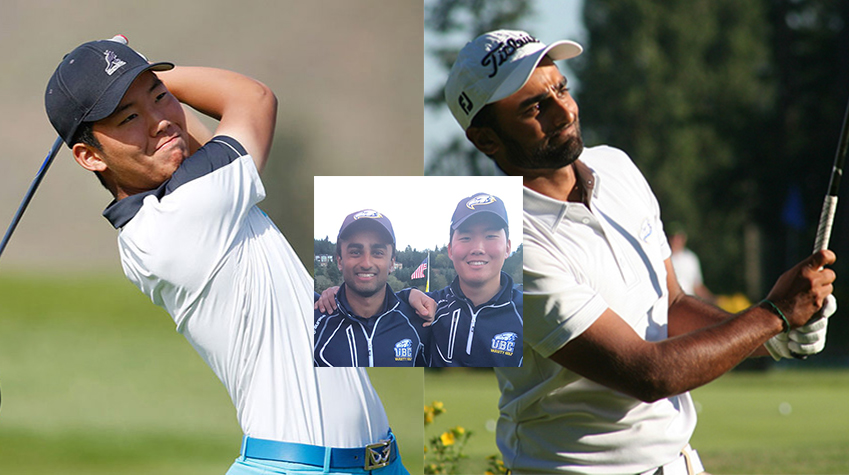 A huge month of May for the University of B.C. Thunderbirds men’s golf team has become even bigger for Ziggy Nathu and Andy Kim.

The two UBC players are heading to Florida to compete in the 33rd PGA WORKS Championship. The 54-hole event runs May 10-12 at the PGA Golf Club in Port St. Lucie, Fla.

For its first 32 years, the tournament was known as the PGA Minority Collegiate Championship, but it has been rebranded this year as the PGA WORKS Championship. UBC is the first Canadian school to send athletes to compete in the event.

Golf Channel provides tape-delayed coverage of the event. “I had watched it on the Golf Channel the last few years and I was speaking to one of the coaches in our conference and he mentioned he was sending a couple of players to the tournament,” said UBC coach Chris Macdonald.

“And he said you should look into if your players would qualify. One of the things I had wrongly assumed was that you had to go to an American college or be an American citizen, which is not the case. Basically, it’s open to any international players, especially if their coaches are PGA members, which I am. So it just really worked out well.”

Nathu, a Richmond resident, is completing his senior year with the Thunderbirds, while Kim, who lives in Langley, is a freshman. “I was pretty excited when Chris told me I was going,” Nathu said. “It seems like a really good tournament. From what I’ve heard it is basically run like a PGA TOUR event. And it's televised on Golf Channel which will be really cool for sure.”

“It is such a huge tournament, so this is a great opportunity,” added Kim.

Both players said the event fits perfectly into their schedule, as it will give them some great competition before the NAIA Championship tourney May 21-24 in Mesa, Ariz., and the Canadian University/College Championship, which goes May 28-31 in Komoka, Ont.

“I was actually talking with Chris about that, how we had a little layoff between our conference championship and nationals,” Nathu said. “He said this tournament just kind of came up and seemed to fit perfectly for me and Andy.”

Added Macdonald, “Both of them were wishing they could get in one more event and this was available to them and I just thought what a great warm-up for getting ready for NAIA nationals and the other (Canadian) national we have the last two weeks of May.

“Ziggy is our captain this year and has done a great job. He is so passionate about golf and wants to keep playing the game. Andy as a freshman will get a look at what an absolutely first-class national championship looks like. It is going to be pretty motivating for him.”

Other than transportation to the event, all expenses for Nathu and Kim are covered by the PGA. The event also includes the PGA WORKS Career Expo where student-athletes are exposed to internships and employment opportunities.

Macdonald hopes he can send players each year to the tournament. "I think this is something we will annually send at least two players to,” he said. “I know that we have four women on our golf team right now that would love to be playing in this tournament."

The UBC women play their NAIA national tourney May 14-17 in Oklahoma City, Okla., so it didn’t work sending any women players to Florida for the PGA WORKS tourney. “The NAIA nationals split each year -- sometimes it is the men first and then the women -- so whoever has the off week when this tournament fits, then we’ll send players from that team,” Macdonald said. “UBC is not a registered minority school so I don’t think we would be able to send a team to participate, but we will always send as many individuals as we can.”