These individuals are not widely known by Canadian golfers but they, along with excellent support staff, are the reason Golf Canada is gaining significant notice for the quality of our national development program.

Each province has coaches and staff whose primary responsibility is to identify provincial talent with a goal to elevating that talent to the national team. In British Columbia these people are Debbie Pyne, Managing Director of Player Development and Colin Lavers recently named Performance Coach for British Columbia Golf.

I met up with Tristan Thursday, during the second round of the Augusta National Women’s Amateur. He was at Champions Retreat following Brigitte Thibault and we had a good chance to talk about the women’s program as well as Brigitte specifically.

On paper Thibault is probably the weakest player admitted into the field. Golf Canada worked hard to have her included and thanks to excellent relations within the golf world and respect for our program, were successful. The goal, and a big one, was to make the cut.

Thibault, is 20 years old and has only been playing competitive golf for 5 years. She is every inch an athlete having been a standout in soccer, gymnastics, competitive cheerleading and various snow sports. In soccer she routinely scored three or four goals a game and had a bright future, but for the fact she was injury prone.

Her parents Josee and Daniel, avid golfers, enrolled her in junior programs at the Rosemere Club as young as 7 years old. Golf was fun, but her interests lay in other sports and as parents they fully supported her choices. Playing different sports, without specializing, develops physical literacy and that’s important. A great and critical lesson for any parent to understand.

Brigitte, recognizing her susceptibility to injury, came back to golf as her sport of choice. Martin Whelan, the golf pro at Rosemere, recognized talent and started working with her. He still does. CTV recently published an excellent bio and you can read it HERE. 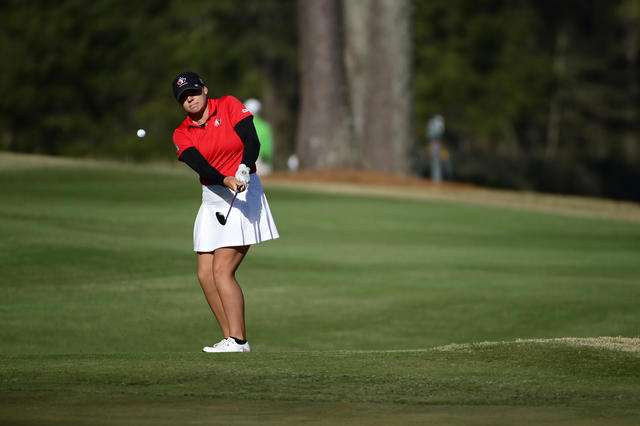 Brigitte Thibault Of Canada Plays A Shot On The No. 2 Hole During Round 2 Of The Augusta National Women's Amateur

Tristan talked about her opening round. Starting the back nine first, Thibault made four straight pars followed by a bogey on the par 5 14th. Bad swing number one was a duck-hook into the trees off the 15th tee. Bad swing number 2 was a pitch out of the trees through the fairway and into the penalty area. A quadruple bogey 8 on 15 was  the result.

Thibault finished the opening nine with birdies at the par three 17th and par five 18th. With four bogeys on the front (her back 9) and the opening round came in at plus 7.

Tristan saw a lot of good in the first two rounds despite the scoring. Thibault is long off the tee, stable and strong in her putting and has a very strong work ethic. Most importantly, she is smart with a strong desire to learn. He is satisfied with her progress.

Thibault had a nice gallery following her. Mother Josee, father Daniel and sisters Julie and Laurence were joined by instructor Martin Whelan, Quebec-based strength and conditioning coach Conrad Crawford, and several family friends all walked the 36 holes. My impression was the Augusta National Women’s Amateur was more stressful for the sisters as spectators than Brigette as a competitor.

Fresno State Coach Emily Loftin also followed both rounds. Emily and Brigitte worked for several months on shaping shots with different trajectories in preparation for this event. A low running shot from under the trees, as well as a low stinger into a swirling wind were two of the shots practiced. Both were successfully used without any hesitation.

After signing her scorecard Brigitte joined her team and had the biggest smile. “I’m very happy” she stated “If I’m happy, then everything is alright”

Her week is not quite over. Today she is playing Augusta National along with all 71 of the other competitors. Only the top 30 after the first two rounds will play Augusta National to conclude the inaugural event. After 36 holes 10 players were tied at plus 3 resulting in a 10 player for 9 spots playoff. All competitors will then join Augusta Chairman Fred Ridley for the Chairman’s dinner.

Brigitte Thibault represented Canada well. I look forward to getting to know the future stars the development program produces. Golf may indeed be an individual sport but it’s clear it will take a strong team to excel.