Tee It Forward And Have More Fun 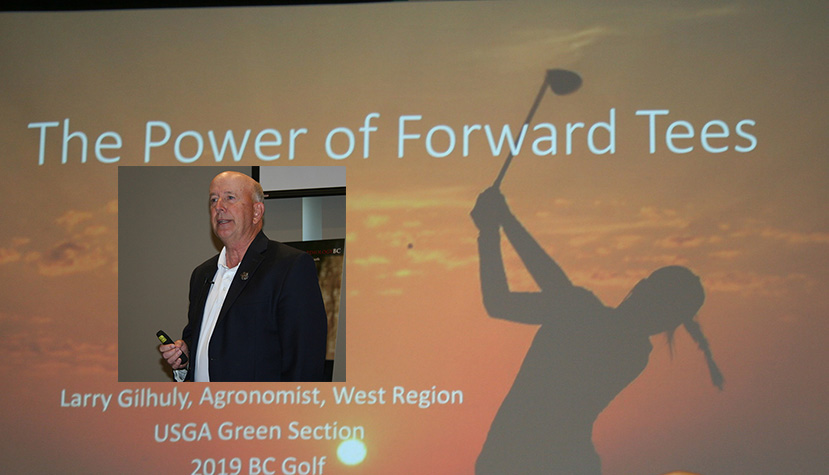 In Larry Gilhuly’s opinion, the three biggest issues facing the game of golf are pace of play, player enjoyment and economic sustainability.

Gilhuly likes to think he has the solution for all three. “The answer for all of these, in my opinion, are properly placed forward tees,” Gilhuly told the Annual General Meeting of British Columbia Golf at Tsawwassen Springs Golf Club.

For much of his 35-year career with the United States Golf Association, Gilhuly was all about agronomy. His formal title with the USGA is Agronomist, West Region. In other words, Gilhuly is an expert on growing grass. But in recent years, Gilhuly has become passionate -- very passionate -- about teeing it forward. And by forward, he means way forward. “This topic that I am talking about has got me fired up,” Gilhuly told his audience.

It was hard not to buy his argument. Gilhuly came to the AGM armed with data to back up his claim that courses are too hard, even from the current forward tees, for average female golfers and senior players.

That makes it impossible for that player to hit greens in regulation on the vast majority of holes from the current forward tees at most courses. “There are a lot of golfers, males, who can reach the green in regulation with a lot of different clubs, but not the women,” Gilhuly said. “And if they do they are hitting low-trajectory shots.

“What is happening now is that it isn’t just the women anymore. This is not a gender issue anymore. As the guys get a little older their swing speeds are slowing down and now they’re hitting those low-trajectory shots.”

This isn’t a new problem. Gilhuly showed his audience a copy of an article headlined, “Women Handicapped By Men’s Courses.” It was written in 1917 by Alexa Stirling, a past U.S. Women’s Amateur Champion. “This has been a problem for a lot longer than I think we all realize,” he said. 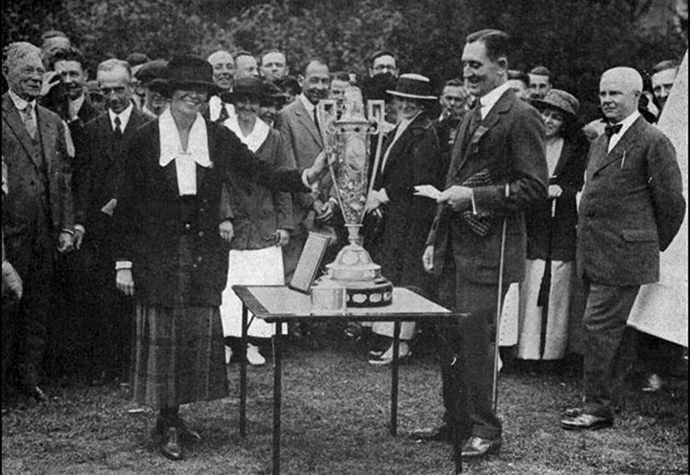 Alexa Stirling Circa 1919. 100 Years Ago She Concluded That Golf Courses Were Set Up For Men To The Detriment Of Female Golfers

Thankfully, golf course operators are slowly starting to get it. Gilhuly and other 'Tee it Forward' proponents have been able to convince them that in order to set up a course so it presents an equal challenge to that faced by more accomplished players playing from the regular or back tees, the forward tees need to be moved forward, on average, about 1,000 yards.

“Properly placed forward tees give all players a good experience,” Gilhuly said. “Think about it, if you started a business from scratch and wanted to be successful, would you say 'let’s make sure in our model here that half of the population tries it once and quits.' I don’t think that is what you do. You try and encompass everybody. This is not just for female players. It is for everybody.”

From most current forward tees, which average in the neighbourhood of 5,200 yards, players with slower swing speeds have no chance of hitting greens in regulation on most holes. In fact, on many courses the only greens that can be reached in regulation for those players are the par 3s.

“That’s it. It always seems to fall in that category. People look at me and blink. They thought the course was short enough at 5,000. No, not even close. And then you can do combinations with these new tees and the (former) forward tees. That’s the whole idea of this. It is happening. Golf courses are starting to do this.”

Players who never stood a chance of making pars and birdies now have that opportunity. And Gilhuly said the game becomes fun for them again.

New forward tees also prompt the stubborn older guys to move up to the former front tees. And they will make it easier for kids to begin the game. “Forward tees are good for the game,” Gilhuly said. “They are. They give everybody an option. Pace of play has improved when forward tees are added. All my friends who have lost their swing speed over the last 10 years are now playing what were the old forward tees.”

Gilhuly had another message for his audience: “Red is dead,” he said, referring to red tees. “I hate red colours,” he said. “If we could just do this one thing, get rid of the red tees. It is amazing what happens. We did it at Canterwood Country Club (in Gig Harbor, Wash.) and the old guys moved up. . . if that red tee is there, they won’t move. We have got to address that issue.”

Gilhuly said some courses have dropped colour-coded tees all together and started simply numbering their tees. “Start with 1 being the forward tee and work your way back,” he said. “Seniors will move forward. I guarantee it. I will buy you a beer if they don’t.

“Pace of play, player enjoyment and economic sustainability all improve with forward tees,” Gilhuly said in closing. “In my opinion this century-old mistake holds the key to our game. That’s a bold comment but it is so simple. . .if we just add these forward tees we will get more women into the game. There’s no question in my mind.”