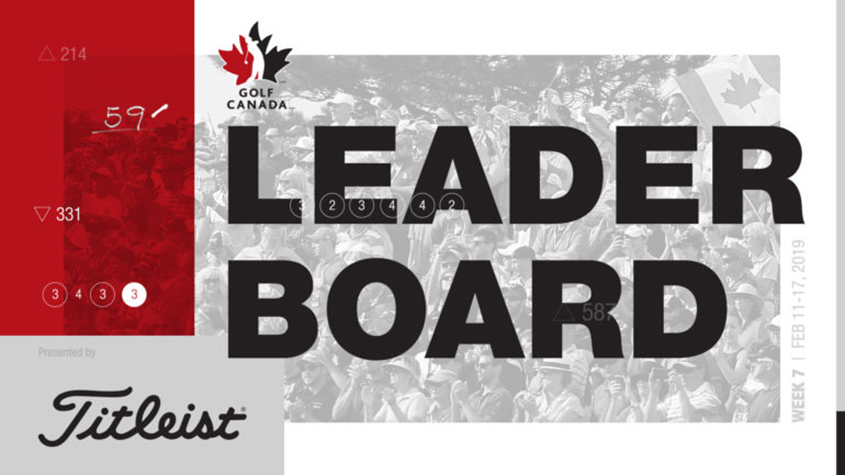 J.B. Holmes rallied from a four-shot deficit in the final round to win the Genesis Open for his first victory in three years. Nick Taylor made the weekend cut for the seventh time in 10 official PGA TOUR events this season.. Adam Hadwin had one of those weekends to forget. His back-to-back rounds of 77 were the highest total since the 2017 U.S. Open. He recorded 13 bogeys or worse over the course of the last two rounds after posting just seven bogeys over the first two days… Mackenzie Hughes has missed the cut in each of his last three events…

Mark Hubbard won the LECOM Suncoast Classic for his first Web.com Tour title. Mike Weir posted his best career result on the Web.com Tour, making the cut in his second straight event this year. For the second straight week, the former Masters champion opened with a round of 66… A week after winning his first Web.com tournament, Michael Gligic posted his career lowest finish in a four round tournament… Ryan Yip missed the cut for the second straight week and third time this season in five events… Brad Fritsch missed the cut for the third time in five tournaments this season… Albin Choi’s 146 was his highest opening two round total in five events this season.

Ryan Fox won the World Super 6 Perth golf tournament after beating Spain’s Adrian Otaegui 3&2 in the match-play final in Perth, Australia. Austin Connelly missed advancing to the match play portion of the event by two strokes. This was his first top 30 result of the season

NEXT EVENT: WGC-Mexico Championship (Feb. 21)
CANADIANS ENTERED: No Canadians entered in this event

Nelly Korda claimed a two-stroke victory at the Women’s Australian Open, winning the tournament seven years after her golfing sister Jessica claimed the same title. Alena Sharp recorded her third best LPGA Tour result and best since a fifth place finish in Hawaii in 2017… Jaclyn Lee recorded her first weekend finish as an LPGA Tour pro and best career LPGA result… Anne-Catherine Tanguay has played five of her first six rounds of the season over par.. Brittany Marchand missed the cut for the second consecutive event this year.

Miguel Angel Jimenez won the Chubb Classic for his seventh PGA Tour Champions title, beating Bernhard Langer and Olin Browne on the first hole of a playoff. Stephen Ames shot an opening round 63, which was a course record until Kevin Sutherland lowered it in round two with a 62. His two day total of 11-under 131 was the best two-day score of his career, bettering his previous mark by two strokes. Ames was looking to become just the second player in the last 11 tournaments to make a hole-in-one and go on to win the tournament after acing the par-3 12th in the opening round.