Seen and Heard At The Vancouver GOLFEXPO 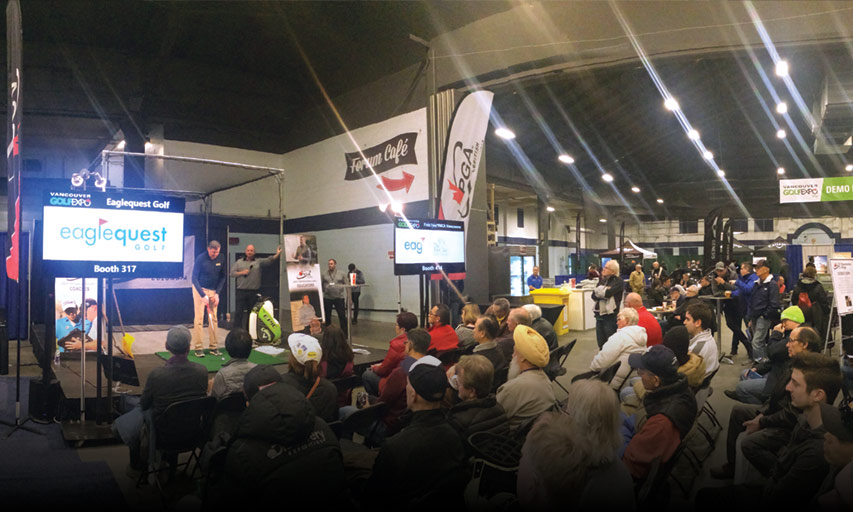 Courtesy Jeff Sutherland/Inside Golf
Entering its second year under the management of the NGCOA, the Vancouver GOLFEXPO tee'd up some great deals but that was not all that happened...
The 2019 edition of the Vancouver GOLFEXPO opened its doors Feb 9-10 to the biggest crowds in years who had their choice of great deals from more than 70 exhibitors. The increased focus on providing deals showed up from the moment golfers walked through the entrance where attendees could enter for a complete golf vacation to play in Reno, NV. 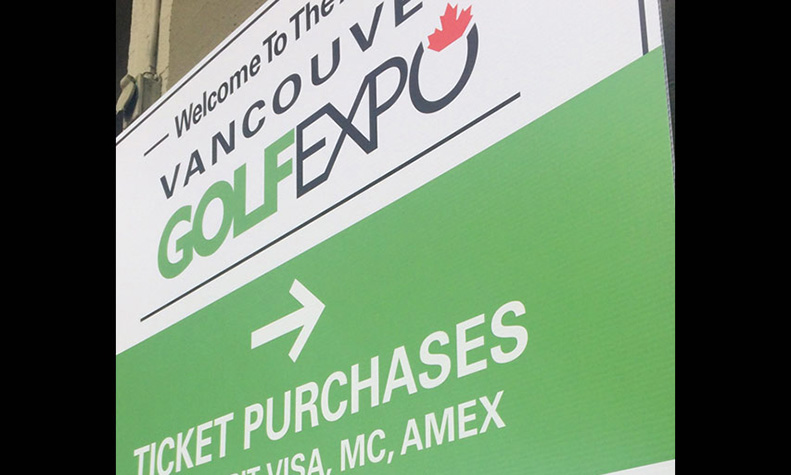 The online Silent Auction had more and bigger deals that featured green fees for courses across the province. One package that stood out was two rounds at ultra-private Capilano GC valued at $810 with the current bid at $405.
Part of the credit for the quality auction items should go to the BC Green Superintendent Association who have gotten involved this year. The funds raised will be used to help grow the game through more research and educational programs like Take A Kid To The Course and Kids Play Golf. Visit https://www.charityauctionstoday.com/auctions/vancouver-golfexpo-2019-6771 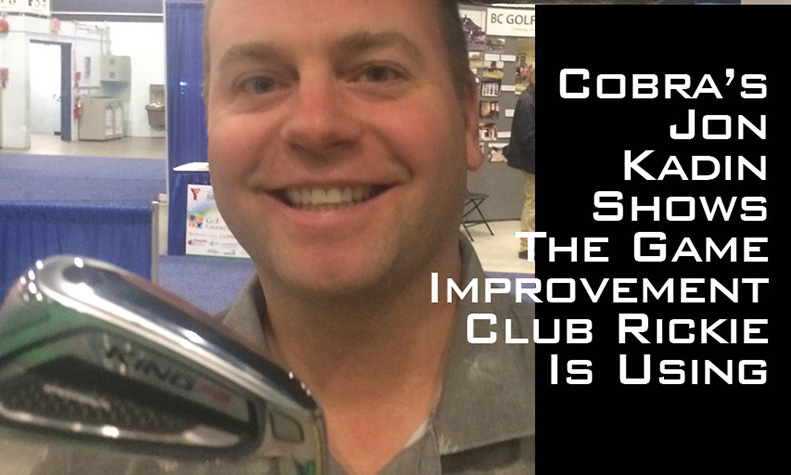 The tee deck featuring the latest from four different manufacturers was busy all day along. One club that was proving popular to attendees was the new Cobra F9 driver that Rickie Fowler has used recently to great success. Jon Kadin from Cobra mentioned that they also had the game improvement 4-iron that Rickie has been using in place of a utility wood. FYI... He hits this casual golfer friendly club 250+ yards.
The busiest time is definitely earlier on each day and it can be argued that there are a few cases where the early bird gets the worm. Vancouver Parks sold a punch ticket for three rounds for just $150 and those were gone in under three hours with a similar story for a green fee deal offered by Northview G&CC.
While on the subject of Northview, a TV in their booth was playing video from the Air Canada Championship where Mike Weir earned his first PGA TOUR victory highlighted by that eagle two during the final round. HP Chris Hoy said they would have it posted on their site for viewing soon. Hard to believe it's been 20 years since that win. For 2019, they are continuing a popular deal where you can get great pricing for groups of 20+ after 12 PM on weekends. 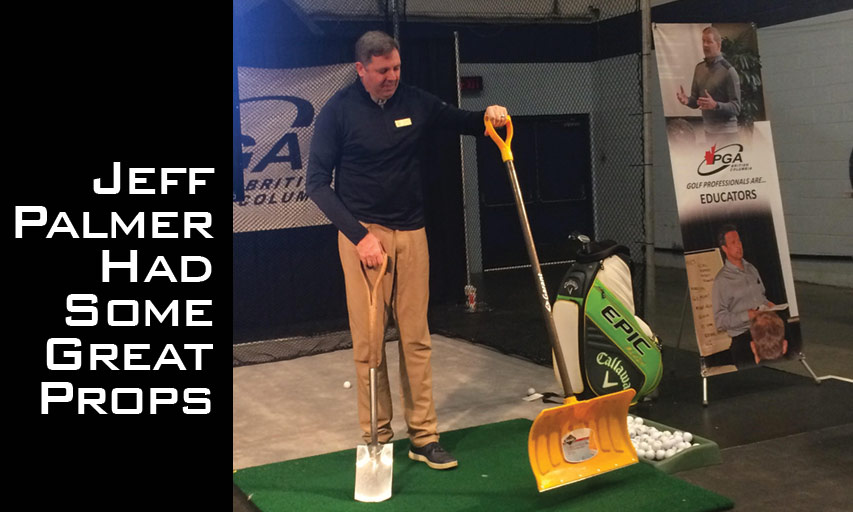 The Instruction Stage was a popular place especially when Highland Pacific's Jeff Palmer brought out the snow shovel he had been using earlier that day in Victoria. Palmer used it and a straight shovel to show how bounce vs no-bounce changed the preferred angle of attack in using a wedge. He also talked about thinking about how you shoot a basketball using your core/body muscles is directly comparable to using your body to make a wedge swing. Look for a pro tip on this in the upcoming issue of Inside Golf magazine.
Also to be featured in this issue will be a review of a trip taken to the South Okanagan last year to play golf and visit wineries. Attendees of the show were able to do the same with the deal being offered by Osoyoos G&CC and Nk'Imp Desert Canyon where you can play Osoyoos' two eighteens and Nk'Imp for only $199... a 30% savings.

It was great to see good representation from some of the courses in the Columbia Valley. Some of BC's best courses can be found in this corridor where, as St. Euegene's Cindy Soukoroff  refers to it, "... there are two 724's, that is seven courses within 24 minutes drive of each other."  St. Euegene may have also had the deal of the show, a stay and play package from $99 for one night's stay and one round of golf. To take advantage of the Show Only Exclusive, you must book within 10 days. Visit www.steugene.ca
There were more than a few exhibitors from Washington State here to attract BCers to travel south of the border. Even with a 76¢ dollar, some of the deals being offered were too good to pass up. The Home Course in Dupont has a deal where if you stay in an area hotel you can play their course for free.
The Lummi Nation, owners of the Silver Reef Casino in Ferndale, recently bought the Loomis Trail Golf Course so you can now play it seven days a week from just $40 CAD (M-F) in winter to $70 CAD weekends in summer. GM Josh Williams (who also owns nearby Homestead Farms), has plans to make the well regarded Loomis the #1 public course in the state. If you are thinking of making this your home course, they have an unlimited annual golf pass for $2250 USD where you can save up to another $750 by joining and using the Casino rewards program. Visit golfloomis.com
While we are on the subject of memberships, Pitt Meadows has an Adult Memberbship Promotion on right now. Choose the category right for you from full play ($341/month) to afternoons 7 days a week after 1 PM ($220/month). All also include additional costs of around $40 per month.
The coolest thing we saw was a massive 10' wide screen that Golf Kamloops had in their booth. Golf Kamloop's Lisa White explained how they had new video footage and this would be a great way to show the member courses. The aerial footage of Tobiano looked amazing. They have HOT early-bird pricing for play and stay in April, two nights' accommodation plus play at both Tobiano and Talking Rock. Visit golfkamloops.com
On a more serious note, the YMCA's First Tee program, which delivers an introduction to golf for kids using the SNAG plastic clubs and balls, suffered a major loss when bags and balls were stolen from an outdoor storage locker at the Rupert Park Pitch & Putt. As their insurance deductible is $10,000, needless to say, this will be a problem when their program goes live in a couple of months. People have stepped up - for example, Joshua Haywood of haywoodgolf is giving some clubs - but there will likely be a greater need.
Look for in-depth analysis by Brad Ziemer as the March cover story of BC Golf's digital magazine, THE SCORECARD. Also if you see any plastic kids golf clubs for sale on "Used fill-in-the-blank", call 604-633-3562 or visit  https://gv.ymca.ca/Programs/Health-Fitness/The-First-Tee