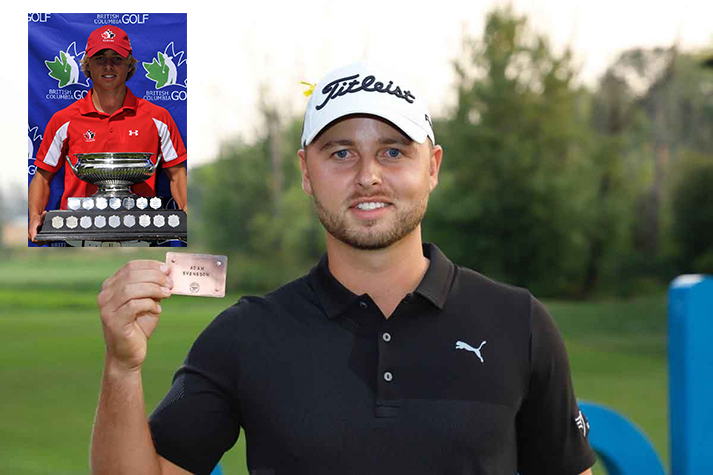 Adam Svensson is now a PGA TOUR regular and that’s a surprise to, well, just about no one.

After all, that’s always been the plan for Svensson, a 25-year-old Surrey native who is off to a solid start in his rookie campaign on golf’s biggest stage.

“To tell you the honest truth, we anticipated that Adam would do very well in his career at a very young age,” says Svensson’s dad, Frank. “I just knew he had the talent. We did go abroad and tested his talent at a very young age and he did well there. He was just destined to end up on the PGA TOUR, so it’s not really not that much of a surprise to us.”

Svensson acknowledges he is just getting settled in on the PGA TOUR after three seasons on the Web.com Tour. Heading into the AT&T Pebble Beach Pro-Am, Svensson had played in eight PGA TOUR events, making five cuts.

He has played his best golf since the calendar turned to 2019. Svensson tied for 18th at the Desert Classic in La Quinta, Calif. and tied for 35th at the Farmers Insurance Open at Torrey Pines in San Diego. He started 2019 with a bang, shooting a nine-under 61 in the first round of the Sony Open in Hawaii before fading to finish in a tie for 43rd place.

“It is a huge step up from the Web.com Tour,” Svensson says over the phone from Monterey, Calif. “I’ve had some nice results. I feel like I've learned a lot from my mistakes, with some of those over-par results that I’ve had on the weekend. It is all a learning experience. The golf courses are a lot harder out here. On the Web you used to have to just keep going lower and lower and sometimes on the PGA TOUR two- or three-under par is just fine.”

Svensson had himself set up for a nice finish at Torrey Pines. He was tied for 11th heading into the final round, but fell back after closing with a three-over 75 in Sunday’s final round. It was another one of those learning experiences he figures to encounter many times during his rookie season.

“You know, I hear that Torrey is one of the hardest courses we play on the PGA TOUR,” Svensson says. ”The rough is so high. I didn’t play bad, I just missed a couple of fairways here and and there and it cost me a couple of bogeys.”

Svensson is part of a nice British Columbia story on this year’s PGA TOUR. He and fellow Web.com Tour graduate Roger Sloan of Merritt have joined Abbotsford natives Adam Hadwin and Nick Taylor to make it a B.C. foursome on the PGA TOUR.

Svensson credits some of the competition he got as an amateur growing up in Metro Vancouver with helping him get to the PGA TOUR. He won the 2010 B.C. Amateur Championship at Castlegar Golf Club as a 16-year-old.

He won countless other events along the way on tours like the Canadian Junior Golf Association and Maple Leaf Junior Tour. He also won the 2010 Callaway World Junior Championship at Torrey Pines. In other words, Svensson was tournament tough at a young age.

“Those junior and amateur events are huge to win when you’re young,” he says. “You’re happy and motivated to get better and play more golf.

“When I was young my dad always put me in with the older kids. He put me in events where I felt a little uncomfortable because they were better players than me. But that's how you learn. You want to play with players who are better than you, hit it farther than you and see where your game is at. I think that was huge to be able to play in those bigger amateur events and obviously travel and play in some U.S. tournaments.”

Kris Jonasson, the longtime Chief Executive Officer of British Columbia Golf, had a bird’s-eye view of Svensson’s development as a young player. Like so many others, he knew Svensson had a bright future. “I am not surprised at all,” Jonasson says.

“Adam always had a tremendous amount of talent. The question mark was always from a mental point of view, could he get himself to a place where he could utilize all of the talent that he had to play the game. And clearly he has done that.”

Svensson had a stellar collegiate career at Barry University in Florida, where he won nine times in two years before leaving early to turn pro in 2014.

He spent three years on the Web.com Tour, where he broke through with a win in January of 2018 that basically clinched his promotion to the PGA TOUR. That win came after Svensson barely missed graduating to the big tour during the 2017 Web.com Tour Finals.

Although that 2017 miss was heart-breaking and took some time to get over, Svensson says in retrospect it was a good thing. That extra year he was forced to spend on the Web.com Tour helped his game.

The Extra Year On The Web.com Tour Gave Svensson The Opportunity To Win And Gain Valuable Experience At That Level

“Obviously, it was very disappointing when I missed in 2017,” he says. “I was pretty upset there for a month or two. But I said enough’s enough and I look back now and I think it was a great thing that happened to me. I got to win on the Web and that was a great experience. And my status wouldn’t have been as good, so maybe it was meant to be.”

Svensson says he hasn’t really had what you would call a welcome to the PGA TOUR moment. “I haven’t really played with any of what you would call the superstars of the PGA TOUR yet,” he says. “I was a little bit jealous that (fellow Canadians) Ben (Silverman) and Mac (Hughes) got to play with Tiger. . . .you see guys you have watched on TV your whole life out here. You get used to that. I am out here doing my own thing, so nothing really special has happened yet.”

Chances are, something special will happen for Svensson and probably sooner rather than later. His main goal right now is to play well enough to retain his PGA TOUR playing privileges. That means finishing inside the top 125 on the PGA TOUR’s FedEx Cup points list. He stood at No. 120 heading into the Pebble Beach tourney.

“My main goal is getting to the FedEx Cup playoffs. Just play consistent golf. The last couple of years on the Web I missed a bunch of cuts, so I’d like to be a more consistent player and get into the top 100, get in the playoffs and just go from there. Obviously, I’d love to win this year, but my main goal is to get into those FedEx Cup playoffs.”