(BC Players shown in Bold)

Rickie Fowler overcame a bizarre triple bogey on No. 11 with some clutch shots down the stretch to win the Waste Management Phoenix Open, a tournament that had twice eluded him. Ontario's David Hearn, who made it into the tournament as a Monday qualifier, made his first weekend cut of 2019 and just his second in the last five events….Meanwhile, Abbotsford's Adam Hadwin picked up world ranking points for the fifth time in the last seven events…Nick Taylor, also from Abbotsford, BC missed the cut for only the third time in nine events…Mackenzie Hughes recorded his fourth missed cut of the season…Blair Hamilton was making just his third career PGA TOUR start after claiming one of three spots in the Monday qualifier. 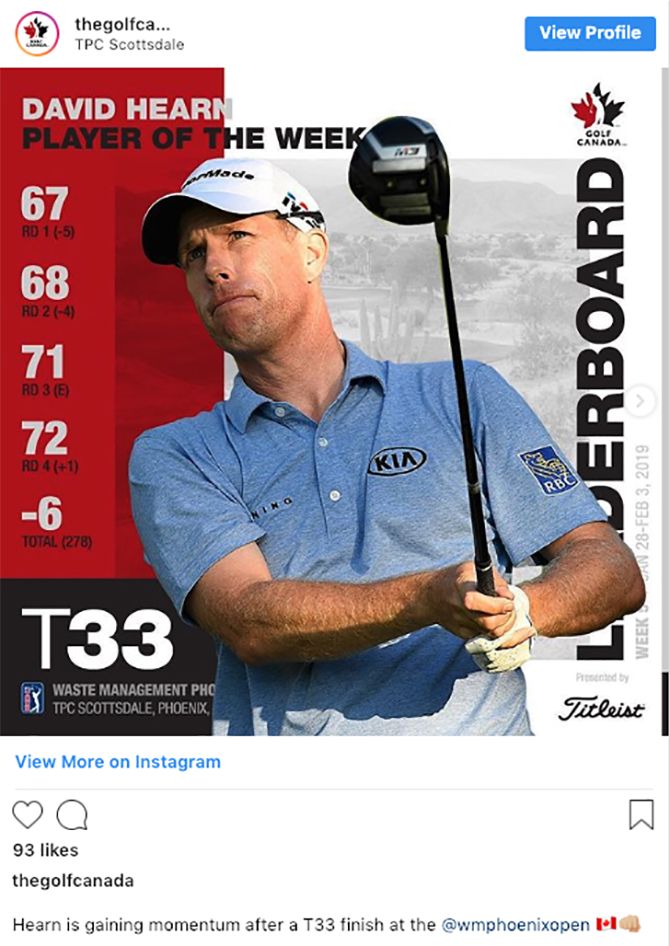 Mark Anderson won the rain-delayed Country Club de Bogota Championship for his second Web.com Tour title by four-strokes over Drew Weaver. Ryan Yip picked up his sixth career top 10 result on the Web.com Tour and his best finish of the season…Brad Fritsch made his first weekend cut of 2019 season, posting four rounds under par.

Dustin Johnson shot a final-round 67 to win the Saudi International tournament by two strokes over Li Haotong of China, who started the day with a share of the lead after a third round 62 that included four eagles. There were no Canadians entered in the event

CANADIANS ENTERED: Both Austin Connelly and Aaron Cockerill are on the entry list but currently outside the number confirmed for the event