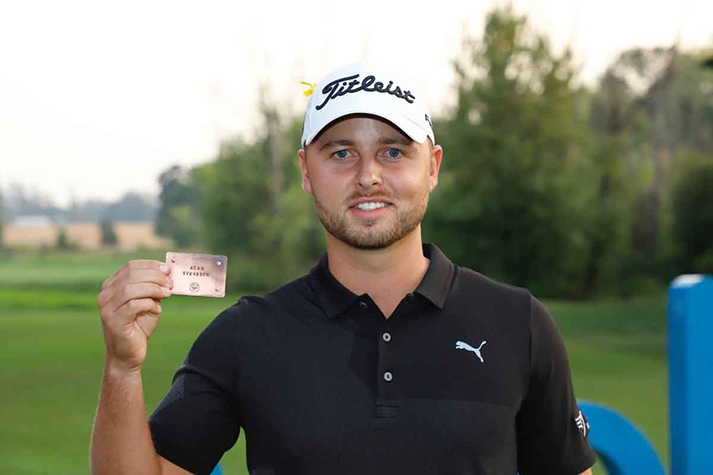 Surrey, British Columbia's Adam Svensson Is About To Realize His Dream By Playing On The PGA TOUR Starting Next Year - Image Courtesy Golf Canada

VANCOUVER – There’s one thing you won’t see Canadian Adam Svensson do on the PGA TOUR next year – hit a ball marked with the number four.

The Surrey, B.C.-native doesn’t know how the superstition started but he simply won’t jinx his game by playing a four, especially on the tour he’s been dreaming of playing his entire life.

While some pros use specially designed balls painted with a lucky numeral, others stick to the factory-produced version, marked with the numbers one through four to help golfers keep track of their shot on the course.

Svensson said he’s never had a bad experience with a four, but he’s not about to risk that changing at this crucial point in his career. Last month the 24-year-old earned his card for next season’s PGA TOUR when he finished the Web.com Tour’s regular season in 14th place on the money list with earnings of US $190,825.

A PGA TOUR card has been a “life-long dream” for Svensson. “Being able to play out there with the guys I grew up watching on TV is pretty special,” he said from Jupiter, Fla., where he now lives and trains. “It’s just an exciting time for me.”

But Svensson has work to finish on the Web.com Tour first. He goes in to this week’s Albertsons Boise Open in 15th place on the tour’s earnings board after posting four top-10 finishes this season and winning The Bahamas Great Abaco Classic in January.

The success follows an off-season full of tough workouts, Svensson said. “Pretty much grinding it out,” he said. “It pretty much just comes down to working harder than I ever have before.”

Working hard at golf has been a major part of Svensson’s life since childhood. He remembers being at the range with his dad when he was about three, and begging to hit balls. “I would just sit there for hours and watch him hit golf balls,” Svensson said.

At five, he was out playing with his dad and got to drive the power cart. He steered it directly into a pond, sinking his dad’s clubs. A tow truck was needed to pull the cart from the water. Svensson was banned from driving for years, but golf continued to play a pivotal role in his life. By eight he was entering tournaments and at 16, he joined Golf Canada’s development team.

The program offered “the whole package,” from a workout coach to a swing coach to a mental coach, Svensson said, and he credits the experience with helping to turn him into a successful pro.

Svensson noted that he isn’t alone in reaping the benefits. He came up with Corey Conners and Mackenzie Hughes, who have succeeded on the PGA TOUR in recent years. “There are a bunch of Canadians that have been extremely successful the last few years that I’ve played with on the Canadian National Team,” he said. 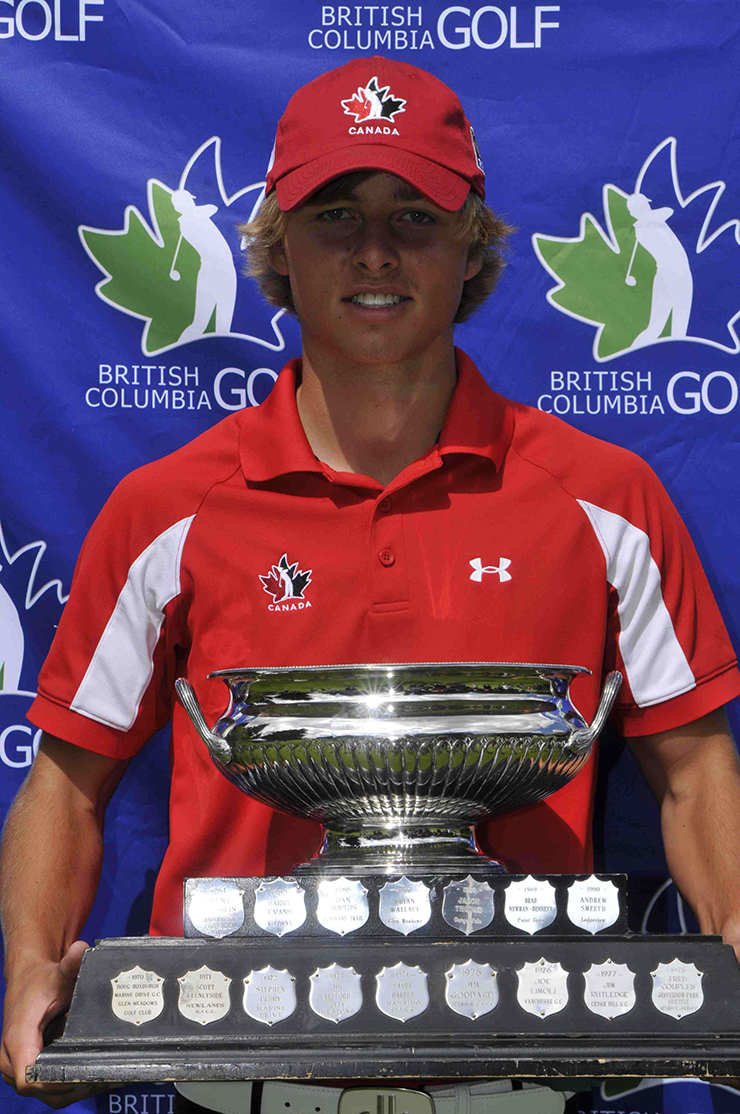 Adam Svensson Holds The British Columbia Junior Boys Championship Trophy From His Win In 2011. If You Look Closely, At The Bottom Right Is The Name Of Another Young Player - (At The Time, In 1978) From The Pacific Northwest -  Who Went On To Spend Some Time On The PGA TOUR

“You play with these guys your whole life, your whole amateur career and you get to see how they work their butt off and how they’re successful now. It’s pretty cool.”

Svensson also spent two years playing at Barry University in Miami, where he helped the team win two NCAA national championships. He took home freshman golfer of the year honours in 2013 and the collegiate golfer of the year award in 2014.

By 2015, Svensson was ready to turn pro. “I just felt that my game was ready and I wanted to challenge myself,” he said. “I had a great time (at Barry). I learned a lot and I was kind of ready to set sail.”

He won Web.com’s 2015 qualifying tournament by a record seven shots and earned himself full status for the next year. Since then, he’s continued to work on what he describes as his “aggressive” style of golf.

“I’m a great ball striker,” he said. “I do play the golf course and try not to play other people. My game pretty much comes down to the greens. If I feel like I’m putting well that week and make a decent amount of putts, I’m going to play well.”

To get more consistency with his putting, Svensson hired Ralph Bauer, a coach who’s worked with a number of PGA TOUR players, including Canadian Adam Hadwin. They’ve been working together for a few months, practising drills and working on mental strength, Svensson said.

The ultimate goal, he added, is to maintain that consistency when he hits the PGA TOUR.

“Golf is so up and down,” Svensson said. “For me, success is playing well week in and week out, making the cut, finishing top 20, top 25. Obviously I want to win on the tour and hopefully I will one day. But just playing consistent golf is success.”