Karishma Thiagaraj, A Native Of India, Has Played Well On The Vancouver Golf Tour, Including An Eight-Under 64 In Her Pro Debut At Morgan Creek - Image Courtesy VGT/Mike West

The seeds of Karishma Thiagaraj’s golf game were sown in southern India, where as an 11-year-old she began to accompany her dad to the course and quickly fell in love with the sport.

It took root in Virginia in her teenage years after her parents moved the family to the United States. Thiagaraj now hopes it can fully blossom as she begins a professional career in the Vancouver area.

Her pro career certainly started well. It was back in late April, not long after she arrived on the West Coast, when Thiagaraj made her pro debut on the Vancouver Golf Tour. Her first round as a pro turned some heads. In the first round of the VGT Masters at Morgan Creek Golf Course in Surrey, all Thiagaraj did was fire an eight-under 64 that included a hole-in-one.

This pro golf thing is easy, right? “No, it’s not,” the 24-year-old Thiagaraj says with a smile. “Golf is hard. It’s a lot of work, day in and day out. But that was a great way to start my pro career. It was a good confidence booster and showed me that hard work pays off.”

Vancouver Golf Tour commissioner Fraser Mulholland was one of those who took notice of Thiagaraj’s impressive pro debut. “I went from not knowing her to knowing her quite well after that 64,” Mulholland says. “It was like, wow, where did she come from?”

Unfortunately, Thiagaraj struggled in the second and final round at Morgan Creek after opening with that 64. But she has played well enough on the VGT this summer to be in line for a season-ending bonus as the top woman on the tour this year.

It was her father, Charles, a former officer in the Indian army, who got Thiagaraj interested in golf. The family moved all over India in her childhood years before settling in the southern Indian city of Hyderabad. That is where Thiagaraj caught the golf bug. “As an army officer my dad had a bunch of perks and we had several courses we had access to,” she says. “We played everywhere in the country and I practised at army golf clubs.”

She began to play some junior tournament golf in India but her competitive career took off when the family moved to Virginia after her mother, Rajnandini, landed a job with the U.S government. “There were not many junior golfers in India when I was there and even now, we do have a professional (women’s) tour in India but there are probably only 12 or 15 girls who play in India and the population is close to 1.3 billion. I have been away for nine or 10 years. The sport is growing but they are still working on it.” 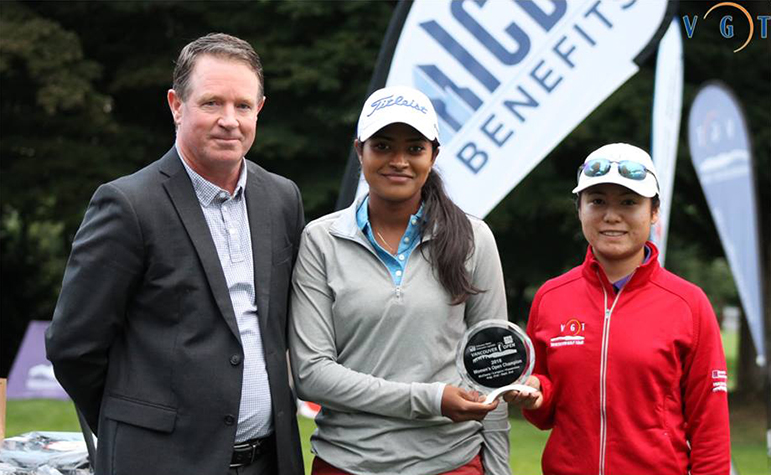 Vancouver Golf Tour (VGT) Commissioner Fraser Mulholland (L) Foresees A Promising Future For Thiagaraj, Especially If She Can Get A Helping Start Financially

After moving to the U.S., Thiagaraj became one of the top junior golfers in Virginia and went on to play collegiate golf at James Madison University in southern Virginia, where she also earned a health sciences degree.

“University golf is challenging, just keeping up with golf and academics and travelling,” she says. “From the second I woke up until bed time, everything was all scheduled. Time management was very, very important and I learned a lot.”

She finished off her degree last December and Thiagaraj wanted to see where her golf could take her. She decided to visit the Vancouver area and for the past few months has been living with an aunt in Port Coquitlam. She plays and practises out of Meadow Gardens Golf Course in Pitt Meadows.

Mulholland, whose tour has provided the likes of PGA TOUR winners Adam Hadwin and Nick Taylor with a place to hone their games, believes Thiagaraj has all the physical tools to play pro golf at a high level. “I think she has got lots of game,” Mulholland says.

“I think she has enough physically to take her game out on the road. There is some uncertainty and doubt about what she is going to do. Does she have the money, the finances, to go out there? If someone gave her a package to go out there and try I don’t think it would take her very long to figure it out.

“She is very gifted physically and has had the experience in college. If she can come out in her first event and says I am going to turn pro and shoots 64 at Morgan Creek, that is a sign she has the mental capacity to do it. This was a great first year for her to get her feet wet and play against the boys.”

Lean and lanky, Thiagaraj hits the ball a mile. Distance is not an issue for her. “It's all about the short game,” she says. “They say golf is a game of misses, so if you can chip and putt, you can shoot low.” She acknowledges money is an issue and would welcome sponsors willing to help her chase her dream, which of course is playing on the LPGA Tour.

Aditi Ashok is the lone Indian native currently playing on the LPGA Tour, but Thiagaraj notes that three Indian women made it through the first stage of the LPGA Tour qualifying school last month in southern California. “Hopefully next year I will do Q-School,” Thiagaraj says.

“I am just working towards it and we’ll see what happens. I plan on spending the winter here. The VGT also has a winter tour so we’ll see how that goes. I just want to give it my 100 per cent and see what comes out of it.”