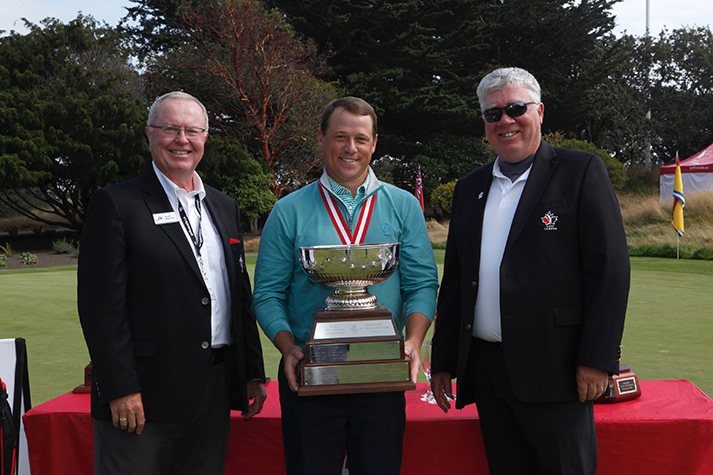 VICTORIA -- Joseph Deraney hails from Kentucky and just like some of those great thoroughbred race horses bred in his native state, he's pretty good down the stretch.

The 35-year-old father of three hung around just behind the leaders for three days at the Canadian Men’s Mid-Amateur Championship and then galloped past everyone to the finish line Friday afternoon.

On a day when the rest of the field was having trouble making birdies, Deraney closed with a nearly flawless five-under par 65 at Victoria Golf Club to win by three lengths -- I mean shots.

In doing so, he spoiled some awfully nice local story-lines. Victoria’s Kevin Carrigan, a member down the road at Royal Colwood Golf Club, finished alone in second place. Saare Adams, a Victoria Golf Club member who was actually serving as the tournament chair, led going into the final round and finished tied for third place.

“I am really excited,” said Deraney, who played collegiate golf at Mississippi State University. “I played flawless. I hit good shot after good shot. Early in the round I had a couple of 15-footers go in, which I hadn’t had all week. So I got some momentum going and then on all the holes where you have to hit good shots and make pars, I hit good shots and made pars. I think I dropped one shot today, but I was pretty solid all around.”

Deraney, at four-under, and Carrigan, at one-under, were the only players in the 156-man field to finish under par, which is testament once again to how good a test Victoria Golf Club is. The course, B.C.’s oldest and celebrating its 125th anniversary this year, measures only 6,100 yards from the tips. So naturally, players who haven’t seen it figure it is going to be a push-over.

“I expected the scores to be pretty low here based on the yardage,” said Deraney, who had never seen the course before this week. “And then I get here and in the practice round I was putting balls off the greens and I knew I had to reset my expectations of what the week was going to be like.

“At this course you have to aim away from the hole, see where the ridges are so you can have the uphill putt and be able to keep the ball on the green.”

Winnipeg’s Todd Fanning, who defended his mid-Masters title for players 40 and over, perhaps put it best: “This is a golf course that keeps you off-balance and today I felt like one leg was shorter than the other,” Fanning said.

A good-sized gallery was on hand to cheer on Adams and Carrigan, the two local favourites. Both had their moments, but could get nothing going. Adams, who started the day with a one-shot lead, double-bogeyed the first hole to lose it. He battled back, but was eventually done in by another double on the 17th hole. 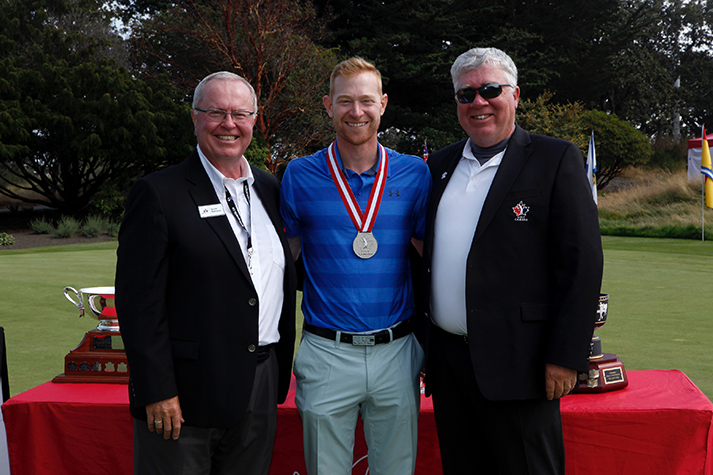 Victoria's Kevin Carrigan, A Two-Time Past Canadian Mid-Amateur Champion Had To Settle For Second This Time In His Home Town.

“It was a fun week and it was fun to be at the home course,” said Adams, a chartered accountant. “It was an up-and-down day. I had a bad start and then ground it back. The whole week was like that. Tons of birdies, lots of bogeys. I finished at even-par, but there wasn’t a lot of pars.”

Carrigan, a financial adviser, has played lots of golf at Victoria and loves the course. But more times than not, he leaves feeling frustrated. This week was no different. “I just feel the exact way I feel every time we finish out the Willie Park (inter-club) matches here,” Carrigan said. “I played great, played fine, didn’t matter. I still got my ass kicked. But what an awesome week. I love the golf course.”

Carrigan, a two-time Canadian Mid-Amateur champion, closed with a one-over 71. Two birdies early on the back nine got him to within two shots of Deraney, but he could get no closer. “I hate to say it, but I was kind of relying on someone else making mistakes,” Carrigan said.

“There are just so few birdie opportunities out there and when you miss an opportunity you just have to hold on tight and wait for the next one. As soon as you start forcing it out there you are just going to get into bad spots.”

Deraney, a former banker who is now a stay-at-home dad, earns an exemption into next year’s RBC Canadian Open. “This will be my first (PGA) TOUR event and I look forward to coming back up here,” he said.

CHIP SHOTS:  Garrett Rank, a three-time Canadian Mid-Amateur champion from Elmira, Ont., tied for third with Adams at even-par. Besides Carrigan and Adams, four other B.C. players finished inside the top 10: Chris Moore of Vancouver was sixth at three-over par; Brent Wilson of Cobble Hill and Sandy Harper of Nanaimo tied for seventh at four-over; and Victoria’s Craig Doell finished 10th at six-over. . .Dave Bunker of Brampton, Ont., fired a six-under 64 -- the low round of the tournament -- on Friday. He finished tied for 14th at nine-over par. . .Brad Wilder of Fort Wright, Ky., aced the par 3 15th hole Friday.