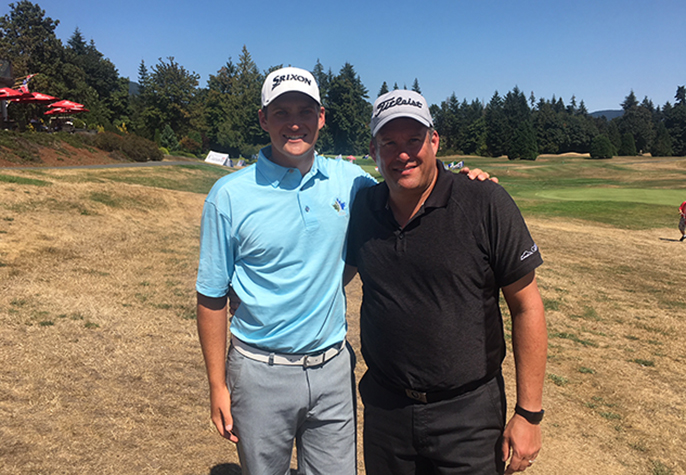 Smithers Native Kaleb Gorbahn (L), Whose Father Dana Is Caddying For Him This Week, Is Tied For Third Place After Shooting A Six-Under 65 On Thursday - Image Credit Brad Ziemer/BC Golf

DUNCAN -- There’s a lot of red and white on the leaderboard at the Canadian Men’s Amateur Championship at Duncan Meadows Golf Club. And blue. The stars and stripes outnumber the Maple Leafs by a considerable margin through three rounds of the 114th playing of the Canadian Amateur.

Defending champion Zach Bauchou of Forest, Va., leads the way at 13-under par after shooting a four-under 67 in Thursday’s third round. Philip Knowles of Jacksonville, Fla., moved into second place thanks to a seven-under 64 that left him at 11-under.

The top Canadian -- and proud to be that -- is Kaleb Gorbahn of Smithers, who is in a three-way tie for third at eight-under par.

Gorbahn fired a bogey-free six-under 65 Thursday that moved him up the leaderboard. He hasn’t given up hope of catching the leader, but Gorbahn said it would be an honour to finish as low Canadian in what will be his last major amateur event.

“Absolutely, it means something to me,” Gorbahn said. “Being the low B.C. player means something to me as well. Obviously, I am very proud of being from this country and this is the amateur event that I wanted to win for many years. I didn’t get many chances at it just because of the lack of being able to travel to the East. Unless I win, this is my last amateur event before I turn professional. I just want to go out on a high note.”

Duncan Meadows seems to agree with Gorbahn, who just completed his collegiate golf career at the University of Nevada-Reno. In two rounds here this week he has fired rounds of 67 and 65. “I like how many wedges I’ve got on this course,” Gorbahn said. “It’s just a good golf course to go low at. We had no wind at the start so that was helpful. Overall, I played pretty good today. I missed a couple of short putts which seems to be story of the week for me. If I could just make a couple of them, then I’m right there.

“And I was bogey-free. That’s been a long time coming. I usually make at least one mistake. I guess my mistakes were the missed birdie putts. I kept it pretty much in front of me and didn’t bite off more than I could handle. It would have been nice to make a couple more putts, but 65 isn’t anything to shy away from.”

Gorbahn, who has his dad Dana caddying for him this week, can’t help but think what might have been if he had played better in Tuesday’s second round at Pheasant Glen Golf Resort in Qualicum. He fired a two-over 73 on Tuesday. “Yesterday was very disappointing,” Gorbahn said. “I feel like if I played halfway solid yesterday there’s no doubt I would be neck and neck with him right now.”

‘Him’ is Bauchou, who wasn’t entirely happy with his 67 on Wednesday. “Just the way this golf course sets up with the par 5s being kind of short means you have to make a lot of birdies just to stay even with the guys playing well,” said Bauchou, a 22-year-old who is heading into his senior year with the NCAA Champion Oklahoma State University Cowboys. “I’m two up and I just have to go out and try to make as many birdies as I can tomorrow.”

Bauchou’s only hiccup came at the par 4 ninth hole, where he made bogey. “It wasn’t great today,” he said. “I didn’t hit it very well, hopefully tomorrow will be a little better. But sometimes when you can manage a decent score on a day when you don’t hit it very good is a positive.”

Garrett Rank of Elmira, Ont., is the only other Canadian besides Gorbahn inside the top 10 heading into the final round. Rank is alone in sixth place at seven-under par after firing a four-under 67 on Wednesday.

Tristan Mandur, the 2016 B.C. Junior Boys Champion who now plays collegiate golf at the University of Utah, is tied for 12th place at four-under par. Mandur had to settle for an even-par 71 on Wednesday after being three-under par through his first five holes. “Just made a couple of mistakes early on the back nine,” said Mandur, who grew up just five minutes from Duncan Meadows.

Click HERE for complete scoring from the Canadian Men's Amateur at Duncan Meadows.

CHIP SHOTS: Thursday’s winner will receive an exemption into next year’s RBC Canadian Open at Hamilton Golf & Country Club as well as a spot in next week’s U.S. Amateur Championship at Pebble Beach Golf  Links. . .The leaders tee off at about 9:30 Thursday morning.