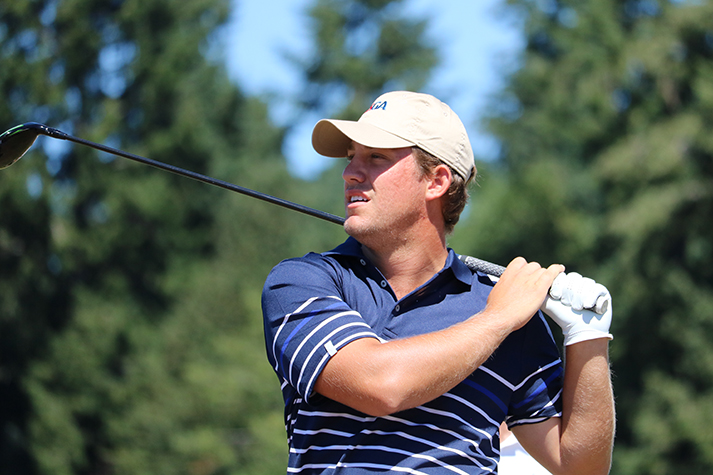 QUALICUM -- They are trying to catch a cowboy at the Canadian Men’s Amateur Championship. Zach Bauchou is halfway to defending his title after a three-under 68 in Tuesday’s second round moved him to nine-under par. Bauchou, a Virginia native who is heading into his senior year with the Oklahoma State University Cowboys, has a three-shot lead on Julien Sale of Gatineau, Que.

After opening with a six-under 65 at Duncan Meadows, Bauchou moved 45 minutes north and played his second round at Pheasant Glen Golf Resort in Qualicum. The tight Pheasant Glen layout reminded him of his home track, Karsten Creek, at Oklahoma State. It seems like there is trouble everywhere at both courses.

“Karsten Creek is fairly similar to this,” Bauchou said after his round. “It’s a little longer but generally the trash is on both sides of the fairway. You kind of learn how to use a driver when left is out of play and right is out of play. It’s very good practice for courses like this. You have to grind every hole.”

Bauchou had six birdies in his round, which he wasn’t entirely happy with. “I wouldn’t say I got the most out of my round,” he said. “I made some sloppy mistakes, but I hit a lot of good iron shots and made a lot of 8- to 20-foot birdie putts, so that was nice.”

The 36-hole cut fell at three-over par and the casualties included B.C. Amateur champion Chris Crisologo of Richmond. Playing his first event after his impressive performance at the RBC Canadian Open, Crisologo shot a seven-over 78 at Pheasant Glen and missed the cut by six shots. It has been a busy summer for Crisologo, who did want to use fatigue as an excuse for his sub-par play this week. “Not entirely,” he said. “I did feel a little flat out there today. But I thought I played pretty good. I made a couple of mistakes I obviously would like back. But that’s golf and I am looking forward to next week.”

Next week is Pebble Beach, where Crisologo will play in the U.S. Amateur Championship at the famed Monterey, Calif., layout. Two-time Canadian Mid-Amateur champion Kevin Carrigan of Victoria also struggled. Carrigan had a nightmarish couple of days, finishing at 17-over par.

Crisologo and Carrigan were two of the three members of British Columbia’s Willingdon Cup team. The 36-hole inter-provincial team competition is contested over the first two rounds of the Canadian Amateur.  B.C. finished third behind second-place Alberta and the winning team from Quebec, thanks largely to the solid play of Kaleb Gorbahn of Smithers.

Gorbahn will enter Wednesday’s third round tied for 11th at two-under par. Gorbahn, who just finished his collegiate golf career at the University of Nevada-Reno, shot a two-over 73 Tuesday at Pheasant Glen.
Gorbahn struggled with his ball-striking on the back nine Tuesday and was hurt by a double-bogey on the par 3 11th hole, where his tee shot rolled over the green.

“That took a little air out of my tires,” Gorbahn said. “That was silly. The ball-striking kind of left me a little bit. . . .Doubles are never fun to take. Bogeys you can come back from, but doubles hurt. Definitely my frustration got the better of me. I think I could have salvaged a pretty good round.”

The final two rounds of the 114th playing of the Canadian Amateur will be played at Duncan Meadows, which Gorbahn is pleased about. He shot a four-under 67 there on Monday and knows if he is to get back into the tournament he’ll probably need to go even lower than that the next two days. “It is a course where you have a lot of wedges and you can take it down sides where it’s bare and the ball can get down there quite a ways,” Gorbahn said.

“Duncan is a place where you can aim down different holes and take different lines that maybe some people don’t see. That is what is good and I am excited about the next two days. Tomorrow is moving day and hopefully I can climb back in there.”

Tristan Mandur, the 2016 B.C. Junior Boys champion from North Cowichan, is part of a three-way tie for third place at four-under par. Mandur, who is heading into his sophomore year at the University of Utah, shot a bogey-free two-under 69 as one of the early starters Tuesday at Pheasant Glen. Mandur will play in the final group Wednesday with Bauchou and Sale.

Bauchou doesn’t figure to be easy to catch. He currently sits 19th on the World Amateur Golf Ranking and is enjoying a terrific summer season that began with the Cowboys winning the NCAA Championships. “That was awesome,” he said. “And then I got to play in the Palmer Cup earlier this summer and got to play in my first PGA TOUR event at the Canadian Open. So it has been a remarkable summer.”

When he won last year’s Canadian Amateur at Toronto Golf Club, Bauchou did not lead until late in the final round. He is not fazed by trying to go wire to wire this year. “That's kind of the good thing about playing at Oklahoma State,” he said. “You play with teammates that are really good so every day you just have to go out there and get it. So that will kind of be my game plan, to go out there and get it. Play aggressive and make as many birdies as I possibly can.”

Click HERE for complete scoring from the Canadian Men's Amateur.

CHIP SHOTS: Three-time Canadian Mid-Amateur champion Garrett Rank of Elmira, Ont., had the day’s low round at Pheasant Glen. Rank, who is a NHL referee in his real life, shot a six-under 65 that included nine birdies and moved him into a tie for sixth place at three-under par. . .The leaders tee off at about 9:30 Wednesday morning at Duncan Meadows.