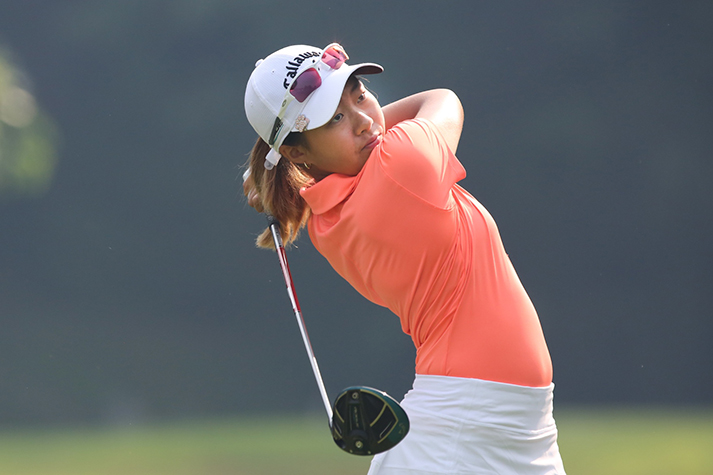 Lauren Kim apparently hasn’t learned about respecting her elders. The 12-year-old has the audacity to be leading the Canadian Junior Girls Championship at Beach Grove Golf Club in Tsawwassen.

And you know what, the Surrey resident thinks she can win. “Yeah, I'm going to try,” she said after posting a three-under par 69 that gave her a two-shot lead. “I feel confident after doing well today.”

Kim, who just finished Grade 7 at White Rock Elementary School, shot that 69 despite a balky driver. She hit only one fairway on her front nine and made the turn at two-under par. “My swing was off,” she said. “I was telling myself make your pars and do what you can.”

She added two more birdies early on her back nine before making her only bogey on her 14th hole of the day. This should not come as a complete surprise. In early July, Kim travelled to the San Diego area to compete in the IMG Academy Junior World Championships where she lost in a playoff in her age category.

She made the cut at last week’s Canadian Women’s Amateur Championship at Marine Drive Golf Club in Vancouver. She struggled the final two days, but had a good reason. She was bitten by a mosquito in her second round and woke up with a badly swollen left arm the next morning. She played the third round hardly able to bend her arm.

“On the night of the third round I took a lot of Benadryl to help the swelling go down,” she said. “The next day I felt off in the morning, but the last four holes I parred my way in. That’s when I woke up. I was like, now I can play better.”

Kim has grown up in a golf family. Her dad Kevin owns and operates the Peace Arch Driving Range on the corner of 8th Avenue and 172nd St. in Surrey. The business has been in the family for 30 years and that’s where Lauren learned to golf. “It started inside our house with the plastic clubs and balls,” her dad said. “Then she started hitting my plasma TV at the time and I said, ‘all right, that’s it, we’re going to the range.’”

Kim said she was not surprised to score well Tuesday, but was surprised to learn she had the lead after completing her round late in the day. “Well, today I was expecting maybe top 10 or top 5, not leading,” she said. “It’s surprising, I was thinking some scores to be better than three-under.”

Beach Grove played tough on Tuesday. There was a bit of a breeze blowing all day and some of the pins were tucked. Celeste Dao, a 17-year-old from Notre-Dame Ile Perrot, Que., shot the day’s only other sub-par round. She opened with a one-under 71.

Dao is a member of Canada’s National Development Team and entered the tournament as one of the favourites. “For sure, I want to win this tournament, but for me what is important is to stay focused on each shot and don’t think about the result,” said Dao, who had five birdies in her round. Two of them came on par 5s.

“You have to take advantage of the par 5s here,” she said. “And you have to be patient. There are some holes that may look like they are birdie opportunities, but you need to identify the holes where you need to play safe. The front nine is tighter for the drives, the back nine is longer and I think the greens are harder on the back nine.”

Emily Zhu of Richmond Hill, Ont., and Hannah Lee of Surrey are tied for third after posting even-par rounds of 72 on Tuesday. “The beginning of my round was a little iffy,” Lee said. “I had a couple of bogeys but I was able to follow with a couple of birdies. Overall, it was pretty steady.”

Vancouver’s Leah John, the runner-up at this summer’s B.C. Junior Girls Championship, opened with a two-over 74 that left her in a tie for seventh. Her round included four birdies and a triple bogey on the par 18th hole (her ninth of the day). “It was a bit of a roller-coaster today, for sure,” John said. “I just tried to stay the same throughout the round, not get too excited, not get too sad.”

Vancouver’s Tiffany Kong. who was the low Canadian at last week’s Canadian Women’s Amateur Championship at Marine Drive, shot a three-over 75 Tuesday and is tied for ninth heading into the second round of the 72-hole event. “I don’t think it was that tough,” Kong said of the course set-up. “Mostly it was the fact that my body wasn’t doing what I wanted it to do. I think I was maybe still a bit tired from last week. I want to try and get a good rest and see how it goes tomorrow. There’s three more rounds. Anything’s possible. I feel like I might be able to come back a bit.”

The Canadian Juvenile Girls Championship, for players 16 and under, is also being contested this week. Kim has a three-shot lead on Zhu in the juvenile category. A 36-hole Inter-Provincial Team competition is being held during the first two rounds of the event. Quebec leads at even-par after the first round. B.C. is second at six-over par, two shots ahead of third-place Ontario.

CHIP SHOT:  National Men’s Team member Chris Crisologo, just back from his impressive performance at the RBC Canadian Open, spent much the day at Beach Grove offering support to some of his friends in the field.