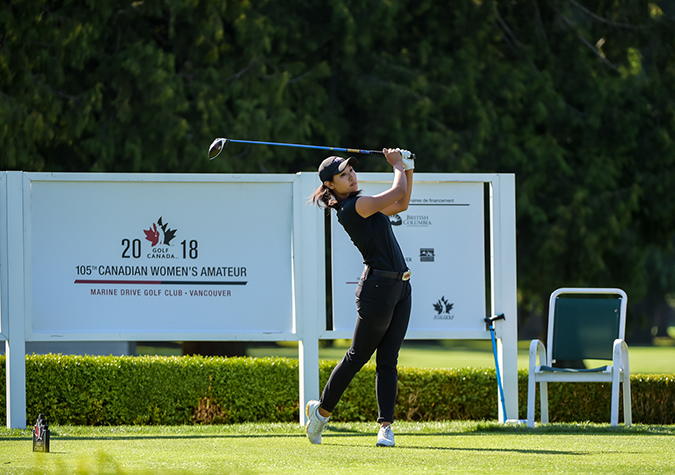 There is no prize money in amateur golf, where you play simply for the championship.  However, there is a nice little perk that will go to Friday’s winner of the Canadian Women’s Amateur Championship at Marine Drive Golf Club in Vancouver -- an exemption into the LPGA Tour’s CP Women’s Open in Regina next month.

Dylan Kim, the 21-year-old Texan who has the lead, had no idea. “Well, I just learned about that right now,” Kim said with a laugh in a post-round interview Thursday. “I did not know that. . . That would be cool.”

Kim grabbed the lead with a bogey-free five-under 66 in Thursday’s third round at Marine Drive. That moved her to 12-under par and one shot in front of Yealimi Noh of Concord, Calif.

“I wish it was more common,” Kim said of her bogey-free round. “Maybe I should try to make it more common. I had a few good par saves. I made a 15-footer on 15 that was really, really big. I am proud of the way I played today.”

Kim, who is heading into her senior year at the University of Arkansas, said she has ridden a hot putter this week at Marine Drive. “I have putted really well and I have been smart,” she said. “There are some tricky holes out here and it’s narrow, so I think it is smart to know which side you can recover from and which side you can’t. I have done that well. I had a couple of good birdies inside 15 feet today, but I had two long ones that I made. I think one was 40 feet. It was nice to see that one go in.”

If you're looking for Canadians on the leaderboard of what is the 105th playing of the Canadian Women’s Amateur, they are hard to find. There is only one Canadian inside the top 20 through three rounds. That would be Vancouver teenager Tiffany Kong, who enters Friday’s final round tied for ninth place at  two-under par.

The 17-year-old, who had 11 birdies in her first two rounds, didn’t have any on Thursday when she fired a three-over 74. “Golf is hard,” Kong said with a smile after her round. “Too hard. . .I just couldn’t get any putts to drop today. My lines were not right and I had some lip-outs.”

Kong also wasn’t driving the ball nearly as well as she did in the first two rounds. “My driver off the tee wasn’t that great, so I wasn’t giving myself much opportunity for approach shots as far as getting it close to the pin,” she said. “That’s why I couldn’t seem to make any birdies.”

Kong also has a chance to head to Regina next month for the CP Women’s Open. The low Canadian after Friday’s final round also earns an exemption into that event. Kong played in the CP Women’s Open as a 14-year-old in 2015 at Vancouver Golf Club in Coquitlam after successfully Monday qualifying into the event. She’d love to go back. “I think I am about 50 yards longer off the tee now than I was then,” she said.

The performance of the Canadians this week at Marine Drive has been disappointing. National Amateur Team member Maddie Szeryk of London. Ont., is tied for 24th at two-over par. Other top B.C. scores include Surrey’s Hannah Lee, who is tied for 29th at three-over, and Victoria’s Naomi Ko, who is tied for 33rd at four-over.

Kim and Noh have a cushion between them and the rest of the field. Gina Kim of Chapel Hill, N.C. is third at seven-under, while world No. 2 Lilia Vu of Fountain Valley, Calif., is sixth at six-under.

The 16-year-old Noh is on a nice run. Last week, she won the U.S. Junior Girls Championship in Pebble Beach, Calif. She fired a four-under 67 Thursday at Marine Drive. “I started out a little slow on the front nine,” Noh said.

“I had one birdie and one bogey and on the back nine I started playing better. I really like the course. It is very challenging and narrow with all the trees. The courses I play in California aren’t really like this. This is so green.”

CHIP SHOTS: The leaders tee off at about 9:40 a.m. Friday. . .The winner also gets an exemption into U.S. Amateur Championship.