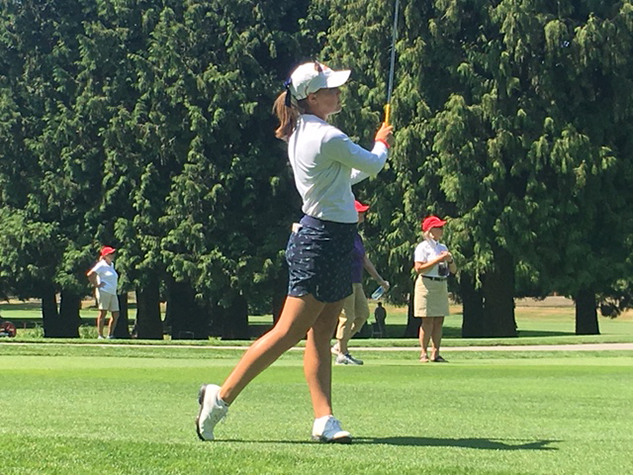 Jennifer Kupcho’s round started with a bogey after she shanked her wedge approach shot from the middle of the fairway. Things got a little better after that. Actually, much better.

The 21-year-old from Westminster, Colo., began defence of her Canadian Women’s Amateur Championship title with a record-setting seven-under 64 Tuesday at Marine Drive Golf Club.
“I actually shanked my approach shot on my first hole and made bogey,” a smiling Kupcho said after her round. “I just missed the putt for par. I birdied the next hole and it kind of went well from there.”

That is something of an understatement.

“I don’t think I have ever shot 29,” she said. “I think that is my low nine ever.” Annika Sorenstam’s competitive course record of 68 at Marine Drive -- set way back in 1992 at the World Amateur Team Championships -- was actually broken before Kupcho posted her 64.

Yealimi Noah of Concord, Calif., posted a five-under 66 and that was matched 18 minutes later by Dylan Kim of Sachse, Tex. Nine minutes after that, Kupcho signed for her 64. The birdies were most definitely flying at Marine Drive.

Kupcho, who only played one practice round at Marine Drive before Tuesday’s opening round, did not see a 64 in the cards. “No, I was thinking just a couple under would be good,” she said. “It is kind of a hard course. It’s really narrow. I didn’t really see this coming. It just kind of kept going and I’ll take it.”

Still, it should not have come as a complete surprise to anyone who has been following Kupcho’s career. She came to Marine Drive as the world’s No. 1-ranked amateur player. She won the individual title at the NCAA Championships this past spring while competing for Wake Forest University. Earlier this month, Kupcho tied for 16th at the LPGA Tour’s Marathon Classic in Ohio.

She went wire to wire at last year’s Canadian Women’s Amateur and beat Lilia Kha-Tu Vu of Fountain Valley, Calif. by five shots. Vu, the No. 2-ranked player in the world, is also in the Marine Drive field and opened with a two-over 73 on Tuesday. Kupcho credited a hot putter with helping her go low Tuesday. She made a mile of putts. “I only had 10 putts on the front nine,” she said.

“There were quite a few long ones in there, a couple 30-footers. My putting was really good. My ball-striking was a little bit off at times. I can definitely hit it a little closer than I was today. I was relying on my putter a lot.”

And about that shank on her first hole? Kupcho said she’s been hitting a few of those lately. “For some reason I have kind of had the shanks lately,” she said. “At the Palmer Cup (earlier this month) I hit a couple in one round. I kind of just try to forget about it. I am a good player, so I kind of know that is not going to happen very often. I just have to forget about it.”

Victoria’s Naomi Ko and Tiffany Kong of Vancouver were the low Canadians on Tuesday, posting rounds of two-under 69 that left them tied for sixth place. Ko, a member of Canada’s National Amateur Team, tied for third at last year’s Canadian Women’s Amateur. “I had a good back nine,” Ko said. “I came back. On the front nine, my ball-striking was really good, but the putts didn’t drop. On the back nine they started to drop. So I’m pretty happy.”

Kong, who is heading into Grade 12 at David Thompson Secondary, had five birdies in her round. “I felt like I could have been even better because I missed some putts,” Kong said. “But my approach shots were so good today and my driver was amazing.”

An inter-provincial team competition is being held during the first two rounds of the tournament. The British Columbia Team of Ko, Mary Parsons of Delta and Christina Proteau of Port Alberni lead after the first round with a score of two-over par. That is three shots better than second-place Ontario.

Click HERE for complete scoring from The Canadian Women's Amateur at Marine Drive in Vancouver.

CHIP SHOTS: The winner and top Canadian at Marine Drive will earn exemptions into the CP Women’s Open, which goes Aug. 23-26 at Wascana Country Club in Regina. Admission to the Canadian Women’s Amateur at Marine Drive is free. . .The field will be cut to the low 70 and ties after Wednesday’s second round.