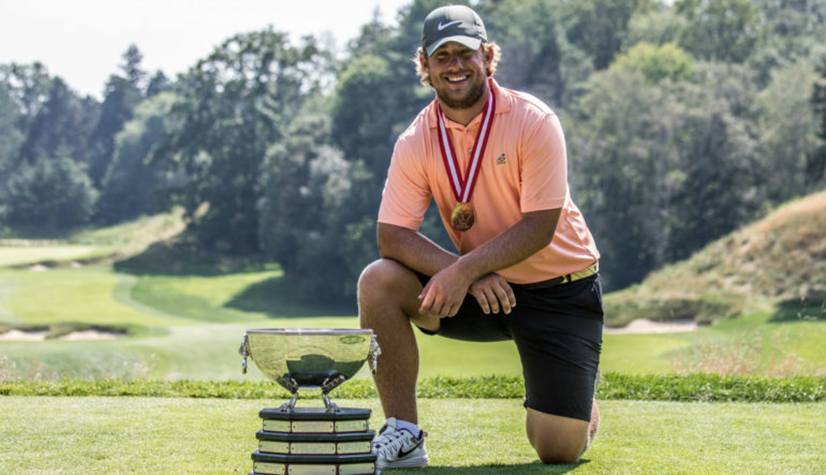 Zach Bauchou Finished At 8-under Par To Win The Canadian Amateur By One Stroke And Earning Exemptions Into The 2017 U.S. Amateur And 2018 RBC Canadian Open - Image Credit (Justin Naro/Golf Canada)

TORONTO, Ont. – Zach Bauchou shot a final round 2-under-par 68 to win the 113th playing of the Canadian Men’s Amateur Championship at The Toronto Golf Club on Thursday.

The 21-year-old from Forest, Va., limited himself to one bogey on the day and made three birdies on the back nine to win the tournament by a single stroke—a victory he has been inching towards all season.

“I’m really honoured and pleased,” Bauchou said, standing next to the 18th green moments before he was awarded the Earl Grey Cup. “I’ve had a really good summer so this caps off the summer and the good playing I’ve had. I finished third twice and I’ve been in the last group both times on those so today, to [start] in the last group and not make many mistakes, was awesome and that was really cool.”

Bauchou played the 18th green conservatively knowing he had a one-shot lead. After putting his approach shot in the middle of the green and putting it to within two feet, he huddled with his caddie and said five words to him. “Oh, we’re going to California.”

In addition to becoming the 22nd American to claim the title of 2017 Canadian Men’s Amateur champion, Bauchou earned an exemption into the 2017 U.S. Amateur at the Riveria Country Club in Palisades, Calif., from Aug. 14-20.

In addition to participating in the U.S. Amateur Championship, Bauchou earned an exemption to the 2018 RBC Canadian Open at Glen Abbey Golf Club in Oakville, Ont, and will also be exempt from 2018 U.S. Open Local Qualifying.

Shintaro Ban of San Jose, Calif., shot one of the two low scores of the day with a 66 to move up the leaderboard and into second place at 7 under par. The 21-year-old made the turn at even par before going on a tear and making birdies on hole Nos. 10, 11, 13 and 16.

For much of the afternoon, Ban and Bauchou took turns atop the leaderboard. On the 18th green, Ban had 40 feet left for a birdie that would bring him into a tie for the lead while Bauchou still had two holes to play. Ban’s ball looked promising as it headed toward the hole, ultimately stopping inches from the cup.

“I was just trying to make sure I got the ball there,” said Ban. “I thought I had the right read but it broke a little more than expected. I mean, it was a 40-footer, I can’t ask for much. It was creeping but it just wasn’t enough.”

Napanee, Ontario native Josh Whalen was the low-Canadian of the tournament shooting a 1-under-par 69 during the final round to earn bronze medallist honours. “I can speak for all the Canadian guys like Matt Williams and Hugo Bernard, in saying that as Canadians we really want to be the ones to take it home,” said Whalen. “Low Canadian isn’t something I thought of at the start but it’s definitely something I’m proud of and speaks to the way I played today.”

After he made a birdie on the 10th hole, Whalen was leading the tournament at 6 under par, but a bogey on No. 15 stretched Bauchou’s lead to three, which proved too much to surmount. Fifty-four-hole leader Camilo Aguado from Colombia had a rough day after a triple-bogey on the ninth hole derailed his tournament, moving the Colombian down the standings to a T4 finish.

The top finisher from British Columbia was Coquitlam's A.J. Ewart, a member of Golf Canada's National Development Squad, who was T11 at 1-under par after setting a course record with his opening round 64.

The Toronto Golf Club played host to the 113th Canadian Men’s Amateur Championship alongside Islington Golf Club, who co-hosted the 264-player field during the first 36 holes.