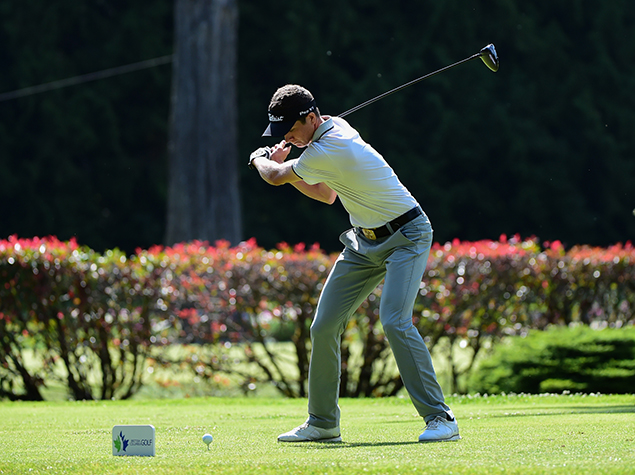 The Youngest Player To Ever Win The B.C. Amateur Championshp, Nolan Thoroughgood, Will Be At Morgan Creek This Week To Defend the Title He Won Last Year As A 15-Year Old - Image Credit Jurgen Kaminski (JKam Photos)/British Columbia Golf

The field for the 115th playing of the B.C. Amateur Championship is full following a supplemental qualifier Sunday at Northview Golf Club’s Canal course in Surrey.

Sixty players competed for the final 21 spots into the B.C. Amateur, which begins Tuesday at Morgan Creek Golf Club in Surrey. Keenan Flemming of Sechelt topped the field with a one-under 71. It took a score of 78 or better to earn a spot.

Dean Huston of Abbotsford shot a two-over 74 to qualify. Huston, a 40-year-old investment adviser, hasn’t played in the B.C. Am for about 15 years. “I decided to try this year because it was my back yard this year,” said Huston, who last teed it up in a B.C. Am at Royal Colwood Golf Club in Victoria in 2001. “I have been hitting it pretty good, so I figured I’d sign up and take a crack at it.”

Gunntas Sidhu, a 22-year-old biology major at the University of B.C., also decided to try and qualify because the tournament is being held close to his Port Coquitlam home. Sidhu shot a three-over 75 to grab a spot in the field.

He had his friend, Anica Yoo, a former B.C. Junior Girls champion who went to Oregon State University on a golf scholarship, as his caddie. “She read most of my putts,” Sidhu said. “I am going to say most of the putts I made were because of her.”

RECORD ROUNDS: It was a 36-hole tournament that began and ended with a course record. When it was over, Langley’s James Allenby had lapped the field at the Vancouver Golf Tour’s Chilliwack Open. He won by an incredible 13 shots.

Allenby shot a course record nine-under 63 in Saturday’s first round at Chilliwack Golf Club, but apparently was just getting warmed up. He closed on Sunday with an 11-under 61 to set another course record.

At 20-under par, he left the rest of the field in his dust. Andy Beuge of Abrams, Wis., was second at seven-under, while Kevin Stinson of Cheam Mountain Golf Course in Chilliwack was third at six-under. Allenby earned $2,000 for the win.

BONUS TIME: For the second time this season, West Vancouver’s Seann Harlingten earned a $2,500 bonus from Freedom 55 Financial for being low Canadian at a Mackenzie Tour-PGA Tour Canada event. Harlingten tied for 15th place at eight-under par at the Staal Foundation Open in Thunder Bay, Ont. That was five shots behind winner Johnny Ruiz of Camarillo, Calif. Harlingten was also low Canadian at last month’s GolfBC Championship at Gallagher’s Canyon in Kelowna, where he tied for seventh.

RUN TO THE QUARTERS: Vancouver’s Trevor Yu had a nice run at the Pacific Northwest Golf Association Men’s Amateur Championship at Emerald Valley Golf Club in Creswell, Ore. The Marine Drive member lost in the quarter-finals on the 21st hole to eventual champion Emmett Oh of Calgary. Coquitlam’s Henry Lee, who just finished his freshman year at the University of Washington, was eliminated in the Round of 32.

SIHOTA SECOND: Victoria’s Jeevan Sihota warmed up for this week’s B.C. Amateur Championship by finishing second in the 13-14 age division at the IMG Academy Junior World Championships in Carlsbad, Calif. Sihota, who won the Future Links Pacific title this past spring at Chilliwack Golf Club, finished the 54-hole event at nine-under par. Vancouver’s Michelle Liu won the girls’ 9-10 age division with a score of two-under par. Ryan Liang of Vancouver tied for second in the boys 9-10 age division with a score of two-under.

KUCHER CLUTCH: Garrett Kucher of Predator Ridge in Vernon won the Ogopogo Invitational at Kelowna Golf & Country Club. Kucher, who birdied three of his final four holes, finished the 54-hole event at six-under par. That was two shots better than runner-up Keith Martin of The Harvest Golf Club in Kelowna.

NEW OWNER: Point Roberts Golf Course has a new owner who plans to restore the facility that has remained closed this year and fallen into disrepair.The Delta Optimist reported that former owner Kenji Nose has sold the property to Bald Eagle Valley Resort Ltd., a Washington State company.

The Optimist says Coco Luo, a Richmond resident, will oversee revitalization of the course. Ladner-based course designer Wayne Carleton will be involved in getting the course back into shape. It is expected to re-open next spring.

WESTERN WINNER: Vancouver’s Angela Zhang held off Claire Lovan of Surrey to win the Future Links Western Championship at Fernie Golf Club. Zhang finished the 54-hole event at even-par, one shot better than Lovan. The boys’ division was won by Logan Carver of Calgary. Carver, who just completed his freshman year at the University of B.C., finished the tournament at one-under par to edge Ethan Choi of Pincher Creek, Alta., by one shot.

QUOTABLE: “It is certainly an event that I watched growing up. With coverage coming on so early and kind of running through the day, I wouldn‘t necessarily get up early to watch it, but if you couldn’t sleep that night you’d know where you were. So it is an event I am looking forward to playing.” -- Abbotsford’s Adam Hadwin, who will tee it up in his first Open Championship at Royal Birkdale later this week.