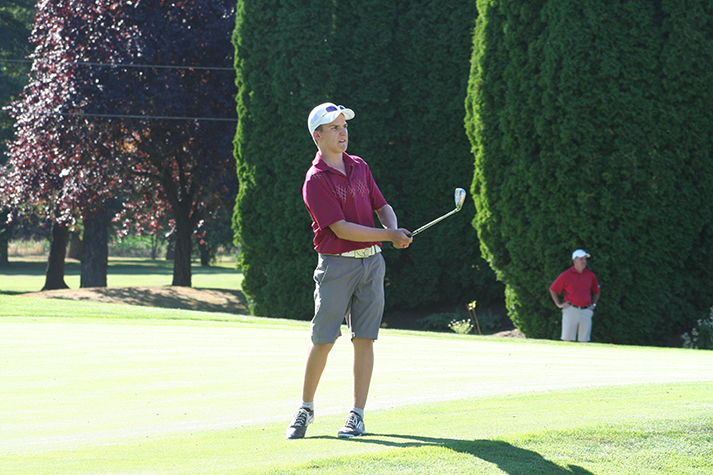 A year later, the 15-year-old Vancouver resident has put himself in position to do much better than that after opening this year’s championship with a six-under 66 Tuesday at Squamish Valley Golf & Country Club.

“Today I made more birdies than the entire tournament last year combined,” Zalli said with a laugh. “I had five birdies last year. I had seven today. And it’s not like I played that bad last year. I was top 20.”

It’s not like Zalli is unfamiliar with making lots of birdies. He won last summer’s B.C. Bantam Boys Championship at Bowen Island Golf Course thanks in no small part to an opening round of seven-under 63.

Zalli, who just finished Grade 9 at David Thompson Secondary in Vancouver, plays out of Richmond Country Club. He came to Squamish thinking his game was in a good place and his play Tuesday confirmed that. “I just wanted to put up a score that would keep me motivated, keep me energized,” he said. “To shoot under par was my goal.”

On a day when he made seven birdies, Zalli credited a bogey save early in his round as being the key to his low score. “I hit an unplayable ball and got up and down for my bogey on the 13th hole (his fourth of the day) and I stayed at even par,” he said. “To make a bogey save like that, that was big, and it keeps you in it and keeps you motivated.”

Zalli, who finished fifth at last year’s B.C. Juvenile Boys Championship at Chilliwack Golf Club, enters tomorrow’s second round with a three-shot lead. West Vancouver’s Thomas Verigin is alone in second after his three-under 69. Four players, including 2016 B.C. Amateur champion Nolan Thoroughgood of Victoria, are tied for third after opening with two-under 70s.

Thoroughgood, who was 15 last summer when he became the youngest winner in the 114-year history of the B.C. Amateur, made six birdies in his round but three-putted three greens at Squamish Valley. “It was kind of an uncharacteristic round,” Thoroughgood said. “Normally I make three birdies and a bogey or something like when I shoot a couple under.”

Zalli said he doesn’t plan to change his approach now that he is playing with the lead. “The reason I got here is that I made some aggressive plays,” he said. “I made decisions and whether or not I pull them off, this is the plan that I want, whether it’s taking a driver on this hole or going for it in two on this hole. I didn’t not play this kind of round because I played conservatively. I shot this because of what I did and I am going to go in with the same plan tomorrow. I am not going to change a thing.”

CHIP SHOTS: The tournament includes a 36-hole zone championship. Zone 4 (Delta, Greater Vancouver, Squamish and Sunshine Coast) leads with a score of eight-under 208. Zone 6 (Upper Vancouver Island) is second at two-over par. . .The field of 142 players will be cut to the low 70 and ties following Wednesday’s second round. . .Defending champion Tristan Mandur opened with a one-over 73. . .Eleven players broke par on Tuesday.