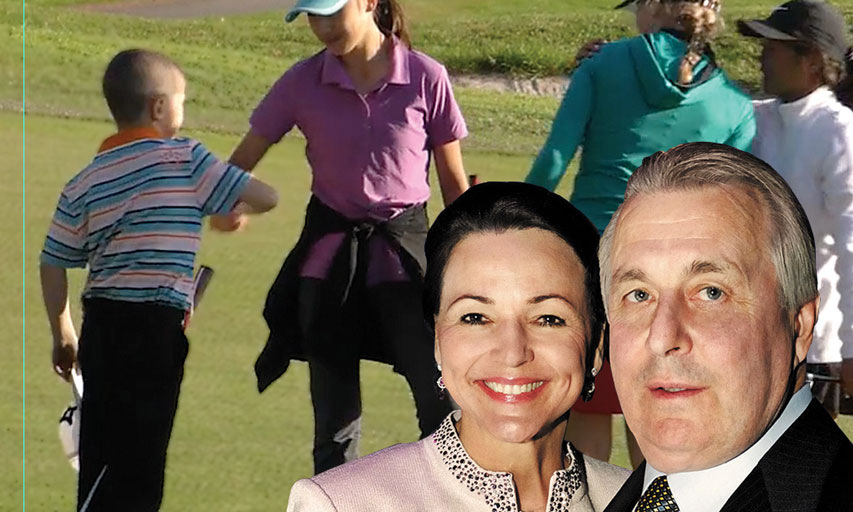 Patricia and Kenneth W. Mariash Sr., the developers behind Victoria's Bayview Place have supported top-tier pro golf in BC's capital city for more than a decade. Now they are adding support for the amateur side… and more.

There is no doubt Ken Mariash has a passion for golf. He carries three sets of sticks in his trunk and has memberships at more than a dozen golf clubs around the world.

And that passion has crossed over into support of the game as well.

It started in 2007 when Ken and Patty first became involved with the Mackenzie / PGA Tour Canada's Victoria Open. That relationship grew to the point, when in 2013, Bayview Place, their development along Victoria’s Inner Harbour, became one of the title sponsors of the long-running tournament.

Then, last year, the couple started looking at how they could further impact golf in the Capital region... to continue growing the game and growing the golf community.

At a press conference on February 10th, speaking on behalf of the Mariash’s (who were unable to attend), Bayview Place project manager Chris Reiter recalled Ken Mariash explaining their vision for supporting all aspects of golf.

“Ken didn’t believe that it was enough (just to sponsor the Victoria Open). The idea of the junior side came about about a year ago… that was when he set down the mission for us to get something for junior golf and then came the Performance Tour that would allow adults to compete as well."

The result is a commitment of $75,000 over three years to assist the various programs of the local Vikes Junior Golf Tour and also the newly formed Bayview Place Vikes Performance Tour.

To find out more about the Bayview Place Viles Junior Tour, view the video clip below:

At the press conference, Bayview Place communications manager Paul Corns also spoke and talked about the Mariash’s intent to develop community, drawing an analogy with their approach to real estate development.

The major community beneficiary is the already extremely successful Vikes Junior Tour which has been a part of the local golf scene since 2008.

The brainchild of Jim Goddard, Director of Golf at Cordova Bay, the tour was intended to address a gap in the opportunities for local junior golfers.

"I came to the realization after being in Victoria for a while that these kids did not have anywhere to play competitively early in the year... and really throughout the year," said Goddard during an interview.

The tour began as 13-14 tournaments in partnership with the University of Victoria Department of Athletics and Men's and Women's Golf teams that filled the space between late February and early May.

Goddard remembers their first tournament in 2008 at Victoria Golf Club with the wind blowing some 60 km per hour, "There was a field of about 30 enthusiastic kids with some finishing in the dark."

Seeing steady growth, three years ago they launched two new programs designed to sequence the kids from just starting to competing on the tour… the "Little Vikes" and Youth Development Clinics.

For youngsters (aged 4-13) new to the game, the "Little Vikes" program teaches not how to hit a golf ball but how to "play golf". Kids play 4-5 holes at a time supervised by members of the UVic men's and women's golf teams learning etiquette, course management and how to play quickly while having fun. From this first exposure, participants graduate to the now named Bayview Place Vikes Jr Tour. To teach the golf swing fundamentals, Youth Development Clinics and other programs that offer golf instruction were also made available at a number of Clubs around the city.

"We found sponsorship, we found dollars in the community and that enabled us to start our clinics with those dollars to help underwrite the cost. So we went to Blenkinsop Range, we went to Jeff Palmer (then Director Of Instruction s at Olympic View). They ran the clinics, we underwrote the cost. We had a voucher program. Once the kids were finished, they would come to us (the Jr Vikes) at no charge. So they have taken their instruction and they came into the Little Vikes program. So (we are now) three years into that and we are seeing so many 10, 11 and 12 year-olds we are almost overrun with them," recalled Goddard with a smile.

So, ironically, the Tour was becoming a victim of it own success.

Some 150 kids took part in 2015 and then last year, all programs combined, there were almost 200 kids participating... half of them under 12 with half of those girls.

With its size and associated costs increasing, the timing for Bayview Place coming on board could not have been better.

Rieter, whose four year old son is now in the Vikes Jr Tour's 'Little Vike' program, spoke about the fit.

"The program that the Vikes had, the one Jim and Bob Russell had created, each of the camps needed some more funding for food and items like that so some of the money will be used for that. Part of this was to help the clubs put money into this as well."

Rieter also spoke about the value of the association with the University of Victoria plus something new... a scholarship program.

"You can't overvalue the brand relationship with UVic. I can't tell you how important it is for parents looking to get their kids involved in sports to see that (Vike) brand. It's a mutually beneficial relationship, especially now that there will be the Bayview Place scholarship fund that is going to be used to provide financial support to the graduates of our tour who intend to pursue studies at UVic."

The Bayview Vikes Jr. Tour has proven to be a strong training ground for area golfers.

Vikes Tour regular Nolan Thoroughgood won the 2016 BC Amateur championship at the tender age of 15 (making him the youngest winner ever) and when asked about the experience of playing on the Vikes Tour, replied that "...it has meant a lot. It (the experience) was priceless and... also affordable."

Another Vikes Tour star, 14-year old Akari Hiashi has played the Vikes' Tour since she was eight years-old and credits alumnus Naomi Ko (now the 138th ranked amateur in the world) and the culture of the tour for her success.

"Naomi Ko mentored me and I want to do that for other girls," confirmed Akari. "The (Vikes) tour is more than just tournaments... it's a community of golfers."

The other major initiative announced is one guaranteed to bring some buzz and attention to the local golf scene.

Bringing together the region's top professionals, amateurs and juniors, the newly established Bayview Place Vikes Performance Tour will see the elite from all three ranks tee it up head-to-head in two-day events.

Running Mondays - Tuesdays throughout the year the circuit will consist of approximately 20 events. Royal Colwood's Jason Giesbrecht is in charge of the scheduling and while the entire schedule is yet to be finalized, confirmed stops include Ardmore, Arbutus Ridge, Bear Mountain, Cedar Hill, Cowichan, Cordova Bay, Gorge Vale, Olympic View, Royal Colwood, and Victoria.

Jim Goddard sees this tour as a natural progression for the players graduating from the Vikes Jr. tour.

"With this new Performance Tour, now they have a place they can progress to. They finish juniors and they can (still) stay in town. They can have a 10 or 15 season long event schedule where they are teeing it up with a scorecard and a pencil and they are competing... week after week."

Aside from continuing top flight competition, there is an added bonus. The top three players on the order of merit (one each from pro, amateur and junior) at the time of the Bayview Place DC Payments Open will receive sponsor's exemptions into each year's field of the tournament held at Uplands GC (this year to be held June 04-11).

In the case of the amateurs, their Zone Championship takes place the week before the Bayview and that tournament will be counting for double points, so there is likely to be even greater drama attached when they tee it up May 27,28 at Victoria and Cordova Bay.

One of the driving forces behind this Performance Tour is Jeff Palmer, GM at Ardmore GC.

A past Commissioner of the Vancouver Island Professional Golf Tour and a strong builder of the game since returning from China in 2012, Palmer sees the tremendous synergies that Bayview Place's involvement will bring to both them and the Vikes Jr Tour.

"Our mission (at the Performance Tour) is to provide a competitive environment for amateur, professional and junior golfers on Vancouver Island and to promote the development of the game through those avenues… (But) we are very excited to working with Bayview Place to enhance the mentor program of the Bayview Place Jr Vikes Tour. You can't help but see how it (the Vikes Jr. Tour) has grown a lot in the last five to six years."

Some golfers may not be aware how important the Mariash's sponsorship has been to the Victoria Open.

Keith Dagg is the Director of the Bayview Place DC Payments Victoria Open Golf Society, and puts their involvement in perspective.

“I was one of four people who founded the tournament in 1981” said Dagg , “and if Ken and Patty Mariash had not stepped up as a co-title sponsor four years ago this tournament would have been over.

And now they have added this wonderful sponsorship for three more levels of local golf including kids. I hope the Victoria community know how lucky we are to have Ken & Patty living here and always giving back. After doing this for 36 years I sure do”

When all is said and done, it may be the totality of what the Mariash’s are supporting that makes the big difference.

Palmer sums up where he, and likely everybody else associated, sees this headed.

"We think it's going to be a great thing and think it will be recognized nationally as a progressive growth of golf movements."