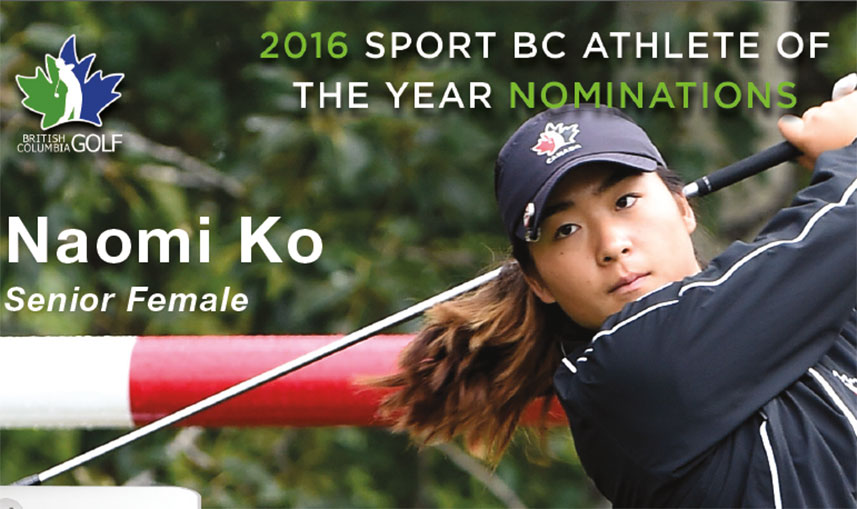 Naomi Ko of Victoria has been nominated for the Sport BC Senior Female Athlete of The Year Award.

Ko, who had an outstanding 2016 season with 2 significant victories to go along with medallist honours in two other high profile events, is the number two ranked amateur female golfer in Canada and will find out on March 8th, 2017 during the awards ceremony dinner being held at the Fairmont Waterfront Hotel in Vancouver, whether she will be adding another honour to her name.

Included in her list of accomplishments this past summer were wins in the Canadian Junior Girls Championship and the Cambia Portland Classic Amateur Open.

Ko, who plays out of Royal Colwood Golf Club in Victoria, finished her freshman season last spring as a member of the North Carolina State women’s golf team with a T5 at the Women’s ACC Conference Championship and followed that up in early May by earning medalist honours at the U.S. Women’s Open Qualifier at the PNGA-owned Home Course in DuPont, Wash.

Ko capped her impressive year on the Canadian amateur circuit finishing T7 at the Canadian Women’s Amateur before heading to Mexico to compete for Team Canada in the World Amateur Team Championship where she finished T6. Ko is also a member of the Canadian National Team